I am a little bit confused on what the assumptions of linear regression are.

So far I checked whether:

But I then read the following:

violations of normality often arise either because (a) the distributions of the dependent and/or independent variables are themselves significantly non-normal, and/or (b) the linearity assumption is violated.

Question 2 My QQnormal plot of the residuals look like this: 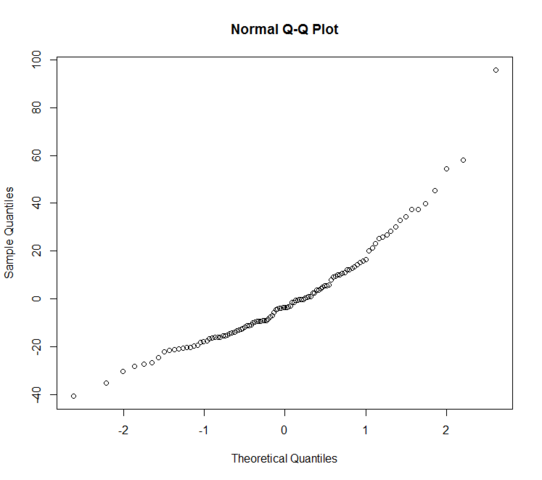 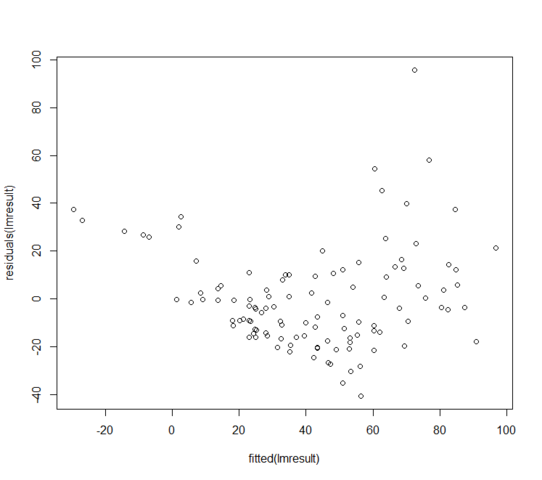 What can I do if my residuals are not normally distributed? Does it mean the linear model is entirely useless?

First off, I would get yourself a copy of this classic and approachable article and read it: Anscombe FJ. (1973) Graphs in statistical analysis The American Statistician. 27:17–21.

On to your questions:

Answer 1: Neither the dependent nor independent variable needs to be normally distributed. In fact they can have all kinds of loopy distributions. The normality assumption applies to the distribution of the errors ($Y_{i} - \widehat{Y}_{i}$).

However, I would recommend thinking about the assumptions in OLS not so much as desired properties of your data, but rather as interesting points of departure for describing nature. After all, most of what we care about in the world is more interesting than $y$-intercept and slope. Creatively violating OLS assumptions (with the appropriate methods) allows us to ask and answer more interesting questions.

Your first problems are

you can't even assess normality with those problems there.

I wouldn't say the linear model is completely useless. However, this means that your model doesn't correctly/fully explain your data. There is a part where you have to decide whether the model is "good enough" or not.

For your first question, I don't think that a linear regression model assumes that your dependent and independent variables have to be normal. However, there is an assumption about the normality of the residuals.

For your second question, there is two different things you could consider :

In addition to your question, I see that your QQPlot is not "normalized". Usually it is easier to look at the plot when your residuals are standardised, see stdres.

I hope it helps you, maybe someone else will explain this better than me.

The most accessible exploration of the impact of non-normal errors that I have found is this paper by Schmidt and Finan.

Here is the summary of the results in the abstract:

Although outcome transformations bias point estimates, violations of the normality assumption in linear regression analyses do not. The normality assumption is necessary to unbiasedly estimate standard errors, and hence confidence intervals and P-values. However, in large sample sizes (e.g., where the number of observations per variable is >10) violations of this normality assumption often do not noticeably impact results. Contrary to this, assumptions on, the parametric model, absence of extreme observations, homoscedasticity, and independency of the errors, remain influential even in large sample size settings.

In addition to the previous answer, I would like to add some points to improve your model:

For your second question,

Something that happened to me in practice was that I was overfitting my response with many independent variables. In the overfitted model I had non normal residuals. Even though, the results stablished that there wasn´t enought evidence to discart the posibility that some coeficients were zero (with p-values grater than 0.2). So in a second model, dismissing variables following a backward selection procedure I got normal residuals validated both graphically with a qqplot and by hypotesis testing with a Shapiro-Wilk test. Check if this could be your case.

Not the answer you're looking for? Browse other questions tagged linear-model residuals assumptions normality-assumption or ask your own question.

1
What are the 'critical' values of skewness and kurtosis for normality assumption?
2
How to model heavily left skewed data?
3
Name this distribution!
3
Do Engle-Granger residuals need to be normally distributed?
2
What if errors (residuals) follow other distribution rather than linear regression?
1
How to choose between different methods of linear regression?
0
Transform variables so residuals become normally distributed
0
$R^2$ vs. significance of the other variables
1
Can I always defend using ols, (for example when my dependent variable is ordinal), if I satisfy all CLM assumptions?
0
need some help for a linear regression
See more linked questions