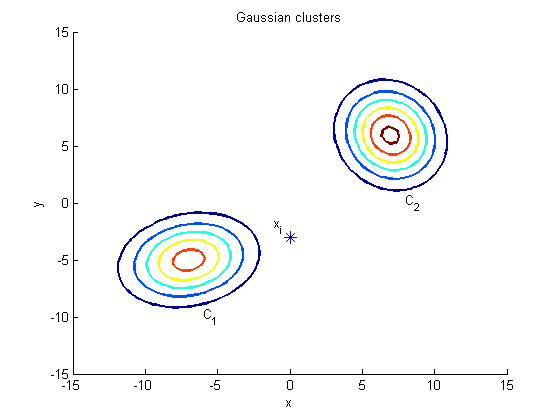 Now, assume that we have a group of points that are generated (sampled) from another Gaussian distribution $q(x) \sim \mathcal{N}(\mu_q, \Sigma_q)$. 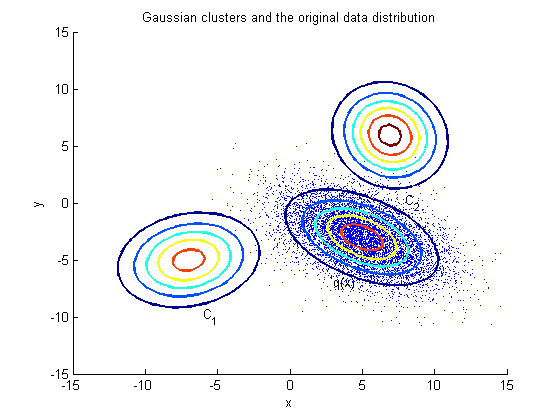 I think you are assuming that the parameters $(\pi_j, \mu_j, \Sigma_j: q=1,2)$ are known and that the sample $\mathbf{X}=(X_1, \ldots, X_n)$ is independently identically distributed (i.i.d.) from a Gaussian distribution $\mathcal{N}(\mu_3, \Sigma_3)$ according to the true data generating distribution.

Moreover, since all the parameters of the model are fixed and known the mean (with respect to the data generating truth) probability of that the random variable point $X_i$ belongs to the first Gaussian component (according to your model), i.e. is assigned in cluster $C_1$ is $$ p_1 := \mathrm{E}[p(X_i \in C_1)] = \int p(x \in C_1) \mathcal{N}(x \mid \mu_3, \Sigma_3) \mathrm{d}x, $$ that can be computed substituting the explicit expression of the Gaussian densities involved.

Note that, since $p_1\in (0,1)$ such a probability $p$ goes to $0$ as the sample size $n$ goes to infinity (even if the data generating truth is equal to the first Gaussian component!).

Not the answer you're looking for? Browse other questions tagged classification normal-distribution clustering expectation-maximization gaussian-mixture-distribution or ask your own question.