We got to joking that he's doing no better than blind guessing on the teams question, but that he's substantially beating the odds if one assumes that the probabilities for a 4, 5, 6 or 7 game series are equal (would expect a 12.5% success rate, he's at 28.5%).

This got us wondering what the odds actually are for each possible number of games. I think I've worked it out, but I want to tie up a few loose ends since part of my approach was brute-force scribbling on a big piece of paper. My basic assumption is that the outcome of every game is random with probability $\frac{1}{2}$ for a each team to win.

My conclusion is that:

I guided my analysis based on a notion that a 4 game series should have a probability of $\frac{2}{2^4}$, analogous to the odds of flipping 4 coins and getting either 4 heads or 4 tails. The denominators were easy enough to figure out from there. I got the numerators by counting the number of "legal" combinations (WWLWWLL would be illegal since the series would be decided after 5 games, the last 2 games would not be played) of results for a given number of games:

What's a non-brute-force method for deriving the numerators? I'm thinking there may be a recursive definition, so that $\rm P(5\;games)$ can be defined in terms of $\rm P(4\;games)$ and so on, and/or that it may involve combinations like $\rm(probability\;of\;at\;least\;4/7\;W)\times(probability\;of\;legal\;combination\;of\;7\;outcomes)$, but I'm a bit stuck. Initially I thought of some ideas involving $\left(^n_k\right)$ but it seems that only works if the order of outcomes doesn't matter.

Interestingly, another mutual friend pulled out some statistics on 7 game series played (NHL, NBA, MLB 1905-2013, 1220 series) and came up with:

That's actually a pretty good match (at least from my astronomer's point of view!). I'd guess that the discrepancy comes from the outcome of each game having being biased toward a win for one team or the other (indeed, teams are usually seeded in the first round so that the leading qualifying team plays the team that barely qualified, second place plays second last, and so on... and most of the games are in the first round).

For a team to win [the series] in game N, they must have won exactly 3 of the first N-1 games. For game seven, there are $\binom{6}{3} = 20$ ways to do that. There are 2 possible outcomes for game seven, and 20 possible combinations of wins for each of the teams that can win, so 40 possible outcomes. For an N-game series a best-of-seven series to end in N games, the number of possibilities is $2 \binom{N-1}{3}$.

Indeed the order doesn't matter, if you're already given the number of games played. Only the last game matters, and the winner must have 3 previous wins, in any order.

Think of the way a game plays out with points going to each player as a path. Each path that leads to a win has a probability given by the product of the probabilities for the number of wins and losses. The following image tries to illustrate an example. 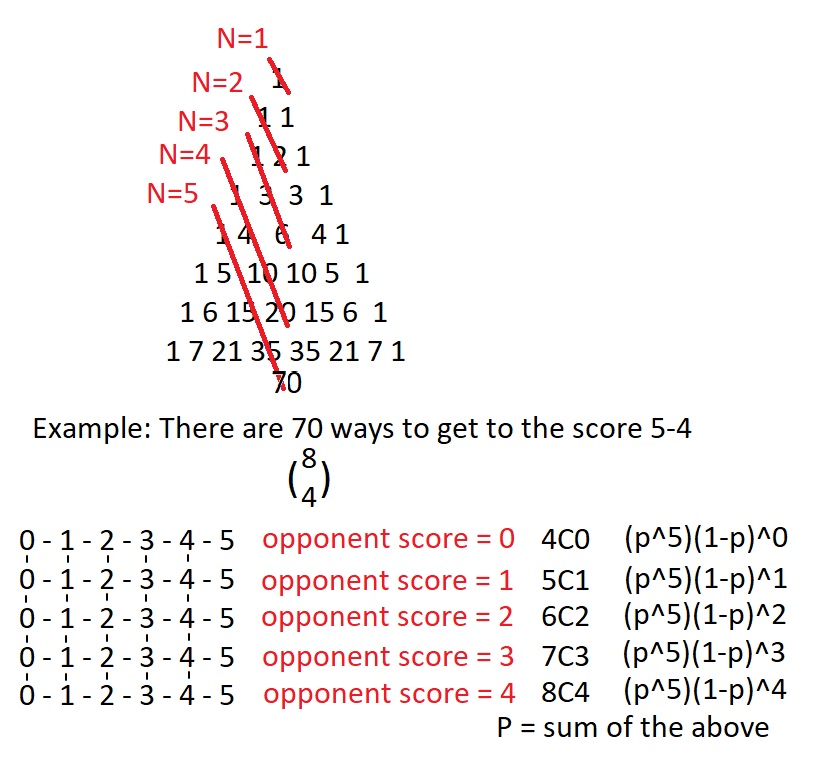 Remember the choose formula is:

Regarding the discrepancy in real-life results, OP noted "I'd guess that the discrepancy comes from the outcome of each game having being biased toward a win for one team or the other (indeed, teams are usually seeded in the first round so that the leading qualifying team plays the team that barely qualified, second place plays second last, and so on." ...

I'll note that even a random ordering would result in such a phenomenon, as many of the games would pair off teams with different levels of skill. In fact, the only system I can think of where the real results would match the theory would be one where #1 is paired off with #2 etc AND where the pairs are coincidentally evenly matched (or the league gives home-arena advantage to the underdog). But even then, the second round would almost certainly feature mis-matched teams even if randomly assigned.

In other words, the theoretical results will always represent a best-case scenario.

Not the answer you're looking for? Browse other questions tagged probability games odds or ask your own question.

14
How can I predict the odds that a dodgeball team is going to win based on the winning history of its players?
2
Efficiently computing poisson binomial sum
2
Law of large numbers vs Short events vs Probability