interaction of categorical and continuous variables

The interaction between the independent variables is significant. Which statistical analysis should I use (in R) to proceed with the analysis and document the interaction?

(Should I simply analyze each of the two categories separately using simple linear regression?)

In the scenario you describe least squares regression will allow you to tell a very straightforward story:

First of all, imagine that you have no dichotomous independent variable. So:

How do you communicate this? A single graph with two regression lines overlaying your data (possibly with different colored/shaped/sized markers when $x_{2}=1$), and a label indicating which line corresponds to $x_{2}=0$ and $x_{2}=1$. Also providing your audience with the values of the $\beta$s and their standard errors and/or confidence intervals is good (like, in a table of multiple regression results).

Finally, while all the above tells you about trend relationships between $y$ and $x_{1}$ given $x_{2}$, least squares regression also tells you about strength of association. If you had a single independent variable, you'd probably want to use something like $R^{2}$ to describe this strength of association, but when you add variables $R^{2}$ doesn't quite mean what it did before. So you might use generalized $R^{2}$, or Pseudo-$R^{2}$ or some such. 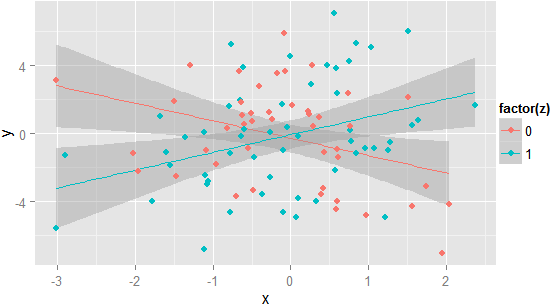 Not the answer you're looking for? Browse other questions tagged regression categorical-data interaction continuous-data or ask your own question.

1
interpretation of main effect and interaction