I've just began looking into survival analyses, and I'm having some difficulty interpreting the results.

I have tried using the R tool for this, but I can't interpret the data. I do have some trails where they timed out (after 1 hour) so I set up my censor column for that. I then tried plotting the full data set (~200 trials), and got a nice downward stepped curve. 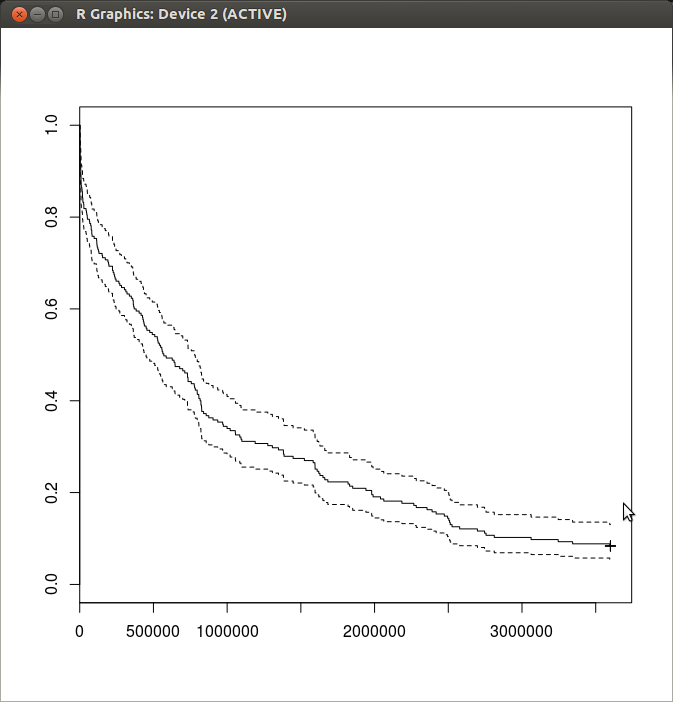 , however this doesnt seem to tell me anything, the model used was just survfit(my.surv ~ 1). If I replace the ~ 1 with one of the variables, for example survfit(mysurv ~ x1), I get a total mess. Lines all over the place (mostly vertical).

So, my questions are these:

1) Is it possible to gain useful information, other than saying that 80% of the trials finished before 2000 seconds, which is what I think this plot shows

2) Is it possible to include factors in the model, for example time ~ x1 + x2, etc. If not how does one ascertain which variables are important by this method.

3) How can I use this to make predictions about new data, not included in this model?

Firstly, when you try doing survfit(mysurv ~ x1) and get a total mess it is probably because x1 is continuous or at least takes lots of different values. You are telling R to calculate separate Kaplan-Meier curves for each value of x1 and if you have multiple variables, e.g., mysurv ~ x1 + x2 + x3 it will attempt to make a separate curve for each possible combination of different values.

The most common approach to investigating whether a variable has an important effect on the survival time is through the Cox proportional hazards model. This assumes that each dependent variable scales the hazard rate by a constant amount for all time. It is important to realise that the proportional hazards assumption doesn't always hold, or sometimes it holds but only with time-varying covariates, etc.

The sort of command you want to do is: coxph(my.surv ~ x1 + x2 + as.factor(x3)) where x1 and x2 are metric variables (discrete or continuous) and x3 is a categorical variable.

You will then get an output similar to (I took an example dataset bfeed from library(KMsurv)):

You could interpret these results in the following way:

You could then look at removing agemth as a predictor:

Once you have settled on a model you should really check whether proportional hazards is a valid assumption: I point you to http://www.ats.ucla.edu/stat/examples/asa/test_proportionality.htm

If you want any more detail or help I will need to see your data and understand your question more, but I hope this has been helpful!

You will probably want to look at Cox proportional hazards models, which are included in the survival library you have already loaded.

You will need to do something like Surv(data) ~ x1 + x2 but i can't remember syntax off the top of my head.

EDIT+ You test for significance by comparing proportional hazards coefficients to zero or hazard ratios (the former exponentiated) to one, or by comparing models with different numbers of parameters by Akaike Information Criterion.

There is also prediction functionality if you create a new data frame with desired covariates.

If you want to extrapolate to mean survival you will need to make parametric assumptions about survival, e.g., exponential survival.

If you want the answer fleshed out and tidied up you will have to wait till tomorrow :)

Not the answer you're looking for? Browse other questions tagged r regression survival or ask your own question.