I'm throwing here the problem as I received it.

I have two random variables. One of which is continuous (Y) and the other one which is discrete and will be approached as ordinal (X). I put below the plot I received together with the query. 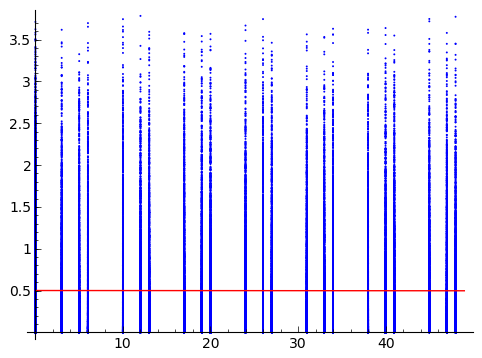 The person who send me the data wants to measure the strength of the association between X and Y. I'm looking for ideas that would not come front loaded with assumptions about what process generated the data. Note that this is not about finding a non parametric way to test the strength of the relationship (as in bootstrap) but about finding a non parametric way to measure it.

On the other hand, efficiency is not an issue since there is a lot of data points.

By definition, ordinal scale is the gauge wherein the true distances between notches 1 2 3 4 is unknown. It is like you are seening a ruler under drugs/alcohol. The true distances can be any. It could be 1 2 3 4 or 1 2 3 4 or whatever. We cannot compute a statistic - such as a correlation - unless decide on the distances, fix them.

One reasoning can be as follows. Since our measuring scale, the gauge, is distorted in an unknown monotonic way, we cannot believe in data values. Only the order of their magnitudes is trustworthy. Without further harness of brain, declare order to be the value. Thus, we replace the observed distribution by uniform distribution, the ranks. After that, may compute association coefficient, say, Pearson $r$. That will be Spearman $rho$, as we know. Pearson $r$ measures the strength of linear association. Ranking the variables was a trick to linearize that portion of monotonic relationship that is attributed to the distributions not having been uniform initially. Thus, Spearman $rho$ is the measure of such monotonicity in the relationship which can be converted to linearity under the action of uniforming the marginal distributions. In the OP question, only one of the two variables is ordinal (and the second is continuous). So, there is no need, generally, to rank both variables. May just rank the ordinal one and then compute $r$.

There are other approaches as well. But in any way, we transform the ordinal scale monotonically "so as to..." (some assumption or some goal), because ordinal scale is distorted to us in an unknown way. Radically another decision would be to "sober up" first and decide that it is either not distorted (i.e. it is interval), or distorted in a known way (is nonequiinterval), or is nominal.

Some asymmetric approaches may include ordinal regression of the ordinal variable by the other (interval/continuous) one. Or linear regression of that latter by the ordinal one, with the model where the predictor is taken as polynomial contrast (that is, entered as b1X + b2X^2 + b3X^3,...). The weakness of these approaches is that they are asymmetric: one variable is dependent, the other is independent.

Is there any reason which Spearman's rank-order correlation coefficient (a nonparametric measure of monotonic association) would not suffice? Is monotonicity too "front loaded?" It's based on differences ($d_{i} = x_{i} - y_{i}$) in independently generated ranks ($x_{i}$ and $y_{i}$) for your variables:

If monotonicity is too stringent an assumption, I wonder if approaches based on maximal information, such as that proposed by Reshef (2011, 2013), which do not even assume functional relationships between $X$ and $Y$ might be more along the lines of what you are looking for?

Not the answer you're looking for? Browse other questions tagged correlation nonparametric ordinal-data association-measure or ask your own question.