In SPSS, how to compare two scatterplots of separate bivariate data to determine if the distributions are similar or not similar?

In SPSS, I have created scatterplots of two continuous variables (X & Y) for two separate groups (G & P). Visual inspection comparing the scatterplots from the two groups suggests that distribution of the data points is similar; however, I would like to prove this. Is there a way to do this, preferably in SPSS? Would a one-way MANOVA be appropriate? If not, why would the one-way MANOVA not be appropriate? 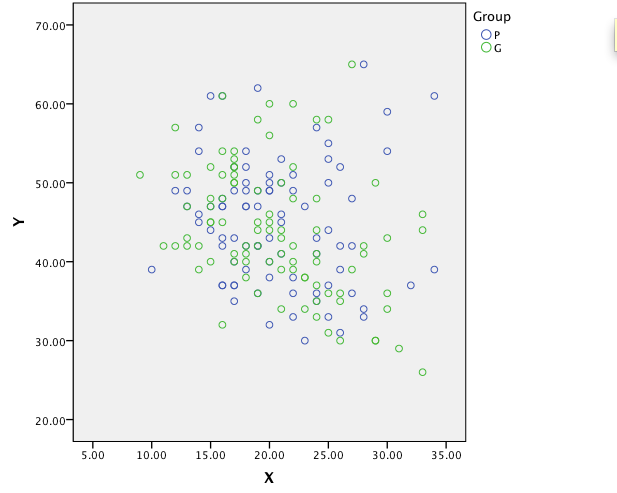 You can do a Wilcoxon test with the NPAR TESTS (Analyze > Nonparametric > Legacy Dialogs). You might also want to do a two-variable Q-Q plot, which is available in the SPSSINC QQPLOT2 extension command available via the SPSS Community website (www.ibm.com/developerworks/spssdevcentral)

A simple powerful bivariate test for two sample location problems in experimental and observational studies looks very promising. Also, this equivalence test post, though it addresses this question for the case of multivariate normal distributions, may give you other useful pointers toward a strategy you can use.

Third, consider this really clumsy, simplistic, but maybe not so terrible strategy. It's easy to apply and makes no assumptions about the shape of either distribution. Draw a grid covering the area that is populated -- for this small sample, maybe a 3 x 3 grid. Determine how many P and how many G points sit in each square. Test for differences in group breakdowns using a 9 x 2 chi-square.

A distribution free multivariate Kolmogorov–Smirnov goodness of fit test has been proposed by Justel, Peña and Zamar (1997).[9] The test uses a statistic which is built using Rosenblatt's transformation and an algorithm is developed to compute it in the bivariate case.

One approach to generalizing the Kolmogorov–Smirnov statistic to higher dimensions which meets the above concern is to compare the cdfs of the two samples with all possible orderings, and take the largest of the set of resulting K–S statistics. In d dimensions, there are 2$^d$−1 such orderings [With your 2 dimensions, this is 3 orderings]...Critical values for the test statistic can be obtained by simulations, but depend on the dependence structure in the joint distribution.

This test would be applied to the data that you used to produce the scatterplot. I'm not sure if it can be performed in SPSS without scripting it yourself, which is feasible. I think @Epaminondas' comment covers the difference between distribution tests and mean differences tests such as MANOVA.

Not the answer you're looking for? Browse other questions tagged spss joint-distribution bivariate scatterplot or ask your own question.

2
How do I see if the distributions of two variables are overlapping in SPSS?
4
How to check if factor structures in two groups are similar?
1
SPSS, Linear Regression, Dichotomous X Continuous Interaction
1
When adding jitter a scatterplot for conveying information is appropriate
2
How to compare two joint probability distributions? How to measure the distance between them?
0
Should I use a repeated measures MANOVA or several repeated measures ANOVAs?