I have a problem with the normality of some data I have: I've done a Kolmogorov test which says it isn't normal with p=.0000, I don't understand: the skewness of my distribution =-.497, and the kurtosis =-0,024

Here is the plot of my distribution which looks very much normal ...

(I have three scores, and each one of this scores isn't normal with a significant p-value for the Kolmogorov test ... I really don't understand ) 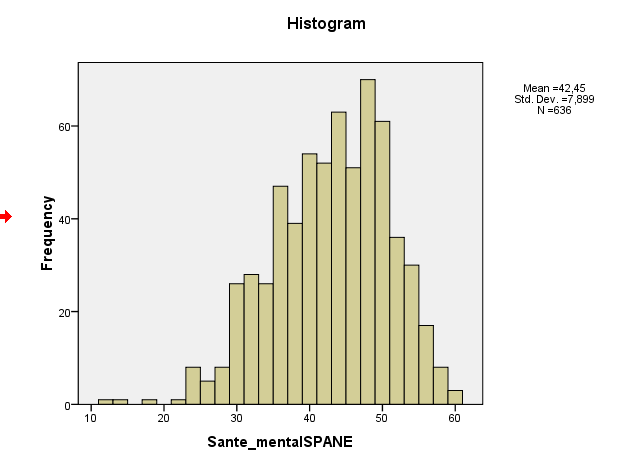 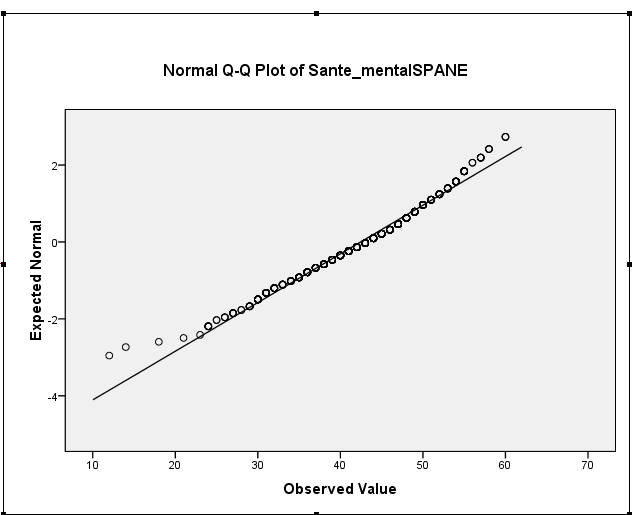 Now for the big question: *Why are you testing for normality?*

[edited in response from comments:]

I'm not really sure , I though I should before doing an ANOVA

There are a number of points to be made here.

i. Normality is an assumption of ANOVA if you're using it for inference (such as hypothesis testing), but it's not especially sensitive to non-normality in larger samples - mild non-normality is of little consequence and as sample sizes increase the distribution may become more non-normal and the test may be only a little affected.

ii. You appear to be testing normality of the response (the DV). The (unconditional) distribution of DV itself is not assumed to be normal in ANOVA. You check the residuals to assess the reasonableness of the assumption about the conditional distribution (that is, its the error term in the model that's assumed normal) - i.e. you don't seem to be looking at the right thing. Indeed, because the check is done on residuals, you do it after model fitting, rather than before.

iii. Formal testing can be next to useless. The question of interest here is 'how badly is the degree of non-normality affecting my inference?', which the hypothesis test really doesn't respond to. As the sample size gets larger, the test becomes more and more able to detect trivial differences from normality, while the effect on the significance level in the ANOVA becomes smaller and smaller. That is, if your sample size is reasonably large, the test of normality is mostly telling you you have a large sample size, which means you may not have much to worry about. At least with a Q-Q plot you have a visual assessment of how non-normal it is.

iv. at reasonable sample sizes, other assumptions - like equality of variance and independence - generally matter much more than mild non-normality. Worry about the other assumptions first ... but again, formal testing isn't answering the right question

v. choosing whether you do an ANOVA or some other test based on the outcome of a hypothesis test tends to have worse properties than simply deciding to act as if the assumption doesn't hold. (There are a variety of methods that are suitable for one-way ANOVA-like analyses on data that isn't assumed to be normal that you can use whenever you don't think you have reason to assume normality. Some have very good power at the normal, and with decent software there's no reason to avoid them.)

[I believe I had a reference for this last point but I can't locate it right now; if I find it I'll try to come back and put it in]

The Kolmogorov-Smirnov Test has a fair bit of power when samples sizes are large, so it can be easy to reject the null hypothesis that your data does not differ from normality. In other words, the test will sometimes suggest that a distribution is not normal in large samples even if it is normal for most intentions.

Think of it like a t-test. If you have two populations that differ in height by only a thousandth of a millimetre, an incredibly large samples will statistically support that these are different, even if the difference is meaningless.

Perhaps you can rely on other methods to determine the normality of your data. The plots you use are two good examples, as well as the skew/kurtosis values.

The Kolmogorov–Smirnov test is distribution-free when the null hypothesis is fully specified—if the mean & variance are estimated from the data be sure to use the Lilliefors variant when testing normality (if you must). That's not to gainsay the other answers.

0
Kolmogorov - Smirnov Test in Python Example
368
Is normality testing 'essentially useless'?
9
Proof / derivation of skewness and kurtosis formulas
6
Can one measure the degree of empirical data being Gaussian?
7
Testing normality
1
How to compute Shapiro-Wilk test power?
2
Tests for lognormal distribution