Data mining: How should I go about finding the functional form?

What procedure/what methods would you use to arrive at finding the functional form of f(...)?

(Bonus point: What is your best guess at the definiton of f given the data above? :-) And yes, there is a "correct" answer that will yield an R^2 in excess of 0.99.)

regression machine-learning algorithms model-selection data-mining
Share
Improve this question
edited May 6, 2011 at 9:57
knorv
asked May 5, 2011 at 16:26

To find the best fitting functional form (so called free-form or symbolic regression) for the data try this tool - to all of my knowledge this is the best one available (at least I am very excited about it)...and its free :-)

EDIT: I gave it a shot with Eureqa and I would go for:

I would call it a perfect fit (Eureqa gives other, better fitting solutions, but these are also a little bit more complicated. Eureqa favours this one, so I chose this one) - and Eureqa did everything for me in about a few seconds on a normal laptop ;-)

$R^2$ alone is not a good measure of goodness of fit, but let's not get into that here except to observe that parsimony is valued in modeling.

To that end, note that standard techniques of exploratory data analysis (EDA) and regression (but not stepwise or other automated procedures) suggest using a linear model in the form

Using OLS, this does achieve an $R^2$ above 0.99. Heartened by such a result, one is tempted to square both sides and regress $f$ on $a$, $b*c$, $a*b*c$, and all their squares and products. This immediately produces a model

plus a little normally distributed error of SD approximately equal to 50.

In response to @knorv's hints, I continued the analysis. To do so I used the techniques that had been successful so far, beginning with inspecting scatterplot matrices of the residuals against the original variables. Sure enough, there was a clear indication of correlation between $a$ and the residuals (even though OLS regression of $f$ against $a$, $a^2$, and $b*c$ did not indicate $a$ was "significant"). Continuing in this vein I explored all correlations between the quadratic terms $a^2, \ldots, e^2, a*b, a*c, \ldots, d*e$ and the new residuals and found a tiny but highly significant relationship with $b^2$. "Highly significant" means that all this snooping involved looking at some 20 different variables, so my criterion for significance on this fishing expedition was approximately 0.05/20 = 0.0025: anything less stringent could easily be an artifact of the probing for fits.

This has something of the flavor of a physical model in that we expect, and therefore search for, relationships with "interesting" and "simple" coefficients. So, for instance, seeing that the estimated coefficient of $b^2$ was -0.0092 (between -0.005 and -0.013 with 95% confidence), I elected to use -1/100 for it. If this were some other dataset, such as observations of a social or political system, I would make no such changes but just use the OLS estimates as-is.

Anyway, an improved fit is given by

with mean residual $0$, standard deviation 26.8, all residuals between -50 and +43, and no evidence of non-normality (although with such a small dataset the errors could even be uniformly distributed and one couldn't really tell the difference). The reduction in residual standard deviation from around 50 to around 25 would often be expressed as "explaining 75% of the residual variance."

I make no claim that this is the formula used to generate the data. The residuals are large enough to allow some fairly large changes in a few of the coefficients. For instance, 95% CIs for the coefficients of $a$, $b^2$, and the constant are [-0.4, 2.7], [-0.013, -0.003], and [-7, 61] respectively. The point is that if any random error has actually been introduced in the data-generation procedure (and that is true of all real-world data), that would preclude definitive identification of the coefficients (and even of all the variables that might be involved). That's not a limitation of statistical methods: it's just a mathematical fact.

BTW, using robust regression I can fit the model

with residual SD of 27.4 and all residuals between -51 and +47: essentially as good as the previous fit but with one less variable. It is more parsimonious in that sense, but less parsimonious in the sense that I haven't rounded the coefficients to "nice" values. Nevertheless, this is the form I would usually favor in a regression analysis absent any rigorous theories about what kinds of values the coefficients ought to have and which variables ought to be included.

It is likely that additional strong relationships are lurking here, but they would have to be fairly complicated. Incidentally, taking data whose original SD is 3410 and reducing their variation to residuals with an SD of 27 is a 99.99384% reduction in variance (the $R^2$ of this new fit). One would continue looking for additional effects only if the residual SD is too large for the intended purpose. In the absence of any purpose besides second-guessing the OP, it's time to stop.

Your question needs refining because the function f is almost certainly not uniquely defined by the sample data. There are many different functions which could generate the same data.

That being said, Analysis of Variance (ANOVA) or a "sensitivity study" can tell you a lot about how your inputs (AA..EE) affect your output (FF).

I just did a quick ANOVA and found a reasonably good model: FF = 101*A + 47*B + 49*C - 4484. The function does not seem to depend on DD or EE linearly. Of course, we could go further with the model and add quadratic and mixture terms. Eventually you will have a perfect model that over-fits the data and has no predictive value. :)

In particular, if algorithm A outperforms algorithm B on some cost functions, then loosely speaking there must exist exactly as many other functions where B outperforms A

/edit: also, a radial SVM with C = 4 and sigma = 0.206 easily yields an R2 of .99. Extracting the actual equation used to derive this dataset is left as an exercise to the class. Code is in R.

All Models are wrong but some are useful : G.E.P.Box

There appears to be a "lagged relationship" between Y and AA AND an explained shift in the mean for observations 11-25 .

Curious results if this is not chronological or spatial data. 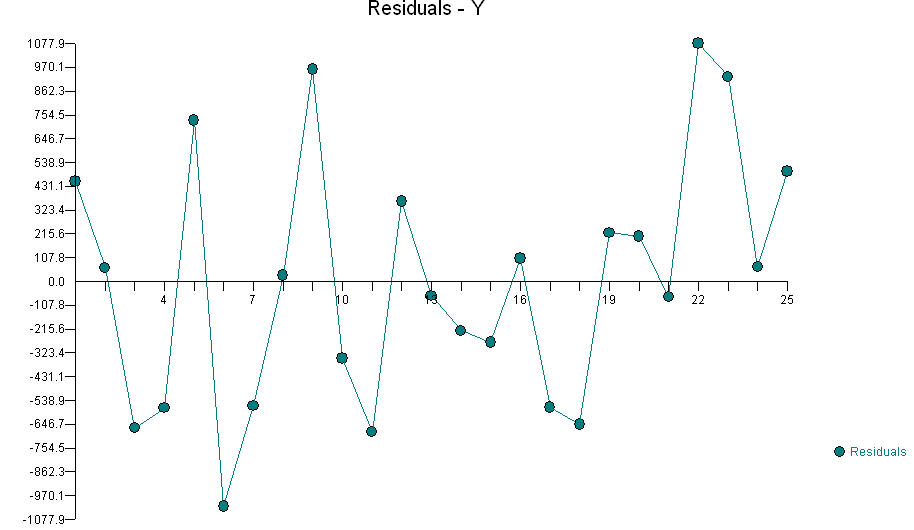 Not the answer you're looking for? Browse other questions tagged regression machine-learning algorithms model-selection data-mining or ask your own question.

114
What skills are required to perform large scale statistical analyses?
17
Auto.arima vs autobox do they differ?
3
What is the best linear regression model to use when the shape of the data resembles a cubic distribution?
2
Forecasting a time series $(x_t,{\bf Y_t})$ where all we care about is forecasting $x_t$
0
Can someone give a concrete example of exploitation in the context of Exploratory Data Analysis?