Is it wrong to use line plots for discrete data?

As an example, take two time-series datasets, one continuous (my weight, measured daily in the morning) and one discrete (the number of donuts I eat per day). It makes sense for the first dataset to be a line plot, as it is reasonable to infer that my weight in any given afternoon will be related to my weight the preceding and following mornings. However, if the number of donuts is represented as a line graph the lines between the dots no meaning can be inferred from that line.

Here's another example: the Federal Hourly Minimum Wage Since Its Inception plot at http://mste.illinois.edu/courses/ci330ms/youtsey/lineinfo.html

Unless I'm mistaken, the minimum wage changes are discrete, and hence it's not possible to look up some arbitrarily selected time and establish the minimum wage at the point using the line interconnecting the dots.

Connected line plots have proven too useful to limit to a single interpretation. A few prominent uses: 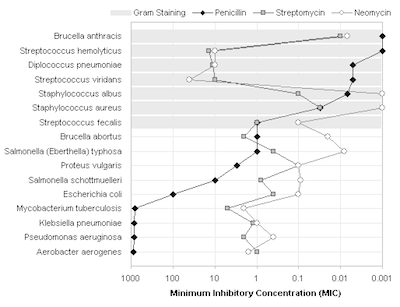 Well, the donuts might be related to the weight :-)

While I see your point, I think this example is not so bad because time (on the horizontal axis, which is what the lines refer to) is continuous. The meaning of the line, to me, isn't so much that, at each time of day you ate a certain number of donuts, but that the number of donuts per day changes in some regular way. Thus, we might add something like a loess smoother to the line, and it would make sense. It is at least reasonable to think of donuts eaten at each hour, or even each minute (although this would be more sensible with a variable where the count per day was higher)

What is more worrisome is when the horizontal axis is discrete (and especially when it is nominal) but lines are drawn. This really makes no sense. E.g. if you are looking at (say) the % voting for Obama among (say) residents of different regions of the USA, it makes no sense to draw a line between Northeast and Midwest; especially since the order of the regions is arbitrary, but changing the order would change the lines. Yet I have seen graphs like this.

5
Where can I find a good resources for making publication quality line plots
4
Panel data descriptives, plots and 'feel for the data'
1
Exploratory data analysis for discrete data
3
Should plots for time series use a logarithmic scale for duration/time?
102
“Best” series of colors to use for differentiating series in publication-quality plots
32
Color and line thickness recommendations for line plots
1
Calculating Formula of Line from a Discrete Distribution