I am trying to gain better understanding of the idea of local outliers (as discussed in this pdf) and how the function is implemented. Here are the key passages from the pdf:

An here is the figure referenced: 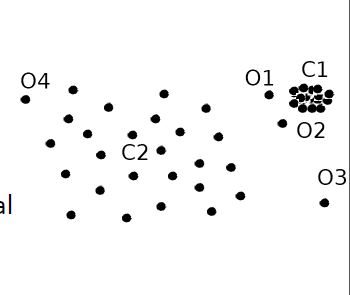 Say the overall set of data points (which contains c1,c2,c3) as in the figure is:

Doing clustering to detect outliers has been attempted several times, but none of these methods seems to be very popular; definitely not as popular as LOF.

The reason may be that outliers can make clustering harder; so you may also want to do the opposite: first remove local outliers, then cluster.

The clustering method DBSCAN also has a notion of "noise", so it does also "detect" density outliers. But then it does not make sense to run LOF anymore, when DBSCAN already flagged "outliers"... and other clustering methods such as k-means are sensitive to outliers, so you can't use them well either.

It seems that LOF and similar methods yield higher quality outliers than clustering based methods.

Not the answer you're looking for? Browse other questions tagged machine-learning clustering density-function outliers or ask your own question.