I have an empirical distribution $G(x)$. I calculate it as follows

I now want to solve an equation for the upper limit of integration (say, $a$), such that the expected value of $x$ is some $k$.

Integrating by parts, I can rewrite the equation as

I think I can calculate the integral as follows

But when I try to use this function with

where fun is eq (1), I get the following error

I think the issue is that my function intgrl is evaluated at a numeric value, while uniroot.All is passing the interval c(0,1000)

How should I solve for $b$ in this situation in R? 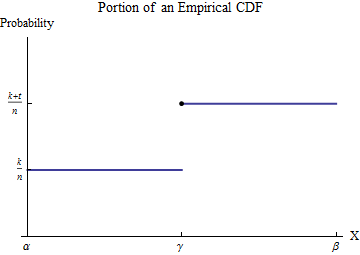 The new integrand, although it is discontinuous at $\gamma$, is integrable. Its value is easily found by breaking the domain of integration into the parts preceding and following the jump in $G$:

Substituting this into the foregoing and recalling $G(\alpha)=k/n, G(\beta)=(k+t)/n$ yields

In other words, this integral multiplies the location (along the $X$ axis) of each jump by the size of that jump. The size of the jump is

with one term for each of the data values that equals $\gamma$. Adding the contributions from all such jumps of $G$ shows that

We might call this a "partial mean," seeing that it equals $1/n$ times a partial sum. (Please note that it is not an expectation. It can be related to the expectation of a version of the underlying distribution that has been truncated to the interval $[0,b]$: you must replace the $1/n$ factor by $1/m$ where $m$ is the number of data values within $[0,b]$.)

Given $k$, you wish to find $b$ for which $\frac{1}{n}\sum_{x_i\le b}x_i = k.$ Because the partial sums are a finite set of values, usually there is no solution: you will need to settle for the best approximation, which can be found by bracketing $k$ between two partial means, if possible. That is, upon finding $j$ such that

you will have narrowed $b$ to the interval $[x_{j-1}, x_j)$. You can do no better than that using the ECDF. (By fitting some continuous distribution to the ECDF you can interpolate to find an exact value of $b$, but its accuracy will depend on the accuracy of the fit.)

R performs the partial sum calculation with cumsum and finds where it crosses any specified value using the which family of searches, as in:

The true value, solving $0.1 = \int_0^b x \exp(-x)dx,$ is $0.531812$. Its closeness to the reported results suggests this code is accurate and correct. (Simulations with much larger datasets continue to support this conclusion).

Here is a plot of the empirical CDF $G$ for these data, with the estimated values of the upper limit shown as vertical dashed gray lines: 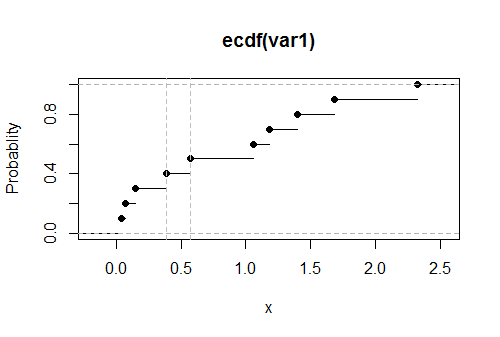 Not the answer you're looking for? Browse other questions tagged r integral empirical-cumulative-distr-fn or ask your own question.

2
What should the integral of a CDF be called?