I have been examining the use of the Point Biserial correlation as a statistic to measure the relationship between a dichotomous variable and a continuous one. Wikipedia et. al. seem to concur that the Point Biserial Correlation is a special case of the Pearson Correlation, but I cannot find a proof for this, algebraic or otherwise, and it is making me wary of using this in the context of the research I am doing (I need to do some statistical confidence testing afterwards). I have tried deriving the truth myself, but have chased everything round in a circle.

Let the $n$ data consist of $n_0\gt 0$ $(x, 0)$ pairs and $n_1\gt 0$ $(x, 1)$ pairs. Their Pearson correlation coefficient will be the same as the reversed data consisting of corresponding $(0,x)$ and $(1,x)$ pairs. Because there are exactly two distinct values of the first coordinates, the regression line of the reversed data must pass through the mean points $(0,M_0)$ and $(1,M_1)$, whence it has slope $(M_1-M_0)/(1-0) = M_1-M_0$. The correlation coefficient is obtained by standardizing this: it must be multiplied by the standard deviation of the first coordinates and divided by the standard deviation of the second coordinates (the original $x$ values), written $s_n$. The standard deviation of the first coordinates is readily computed from the fact that they consist of $n_0$ zeros and $n_1$ ones; it equals

Consequently the Pearson correlation coefficient is

which is precisely the Wikipedia formula for the point-biserial coefficient. 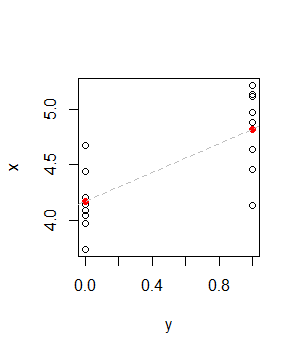 The heights of the red dots depict the mean values $M_0$ and $M_1$ of each vertical strip of points. The dashed gray line is the regression line.

15
How to understand the correlation coefficient formula?
5
Difference between point-biserial and rank-biserial correlations
1
correlation b/w continuous and binary variables