Forecasting a time series with weights

I'd like to forecast (or predict) a time series with weights.

The following works using the regular linear modelling techniques of lm by applying a (sigmoidal) weight distribution to the input data, essentially weighing the latter data points more heavily than the former: 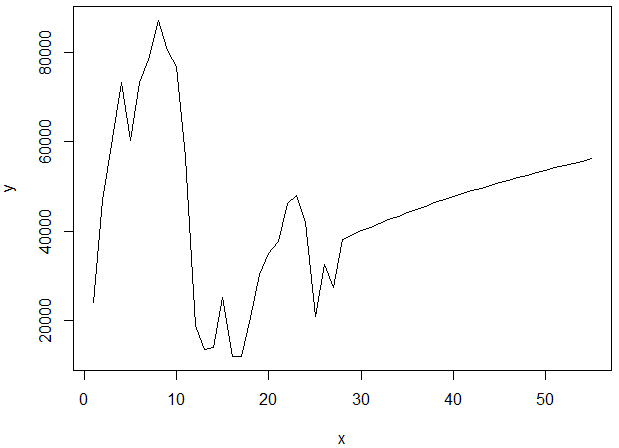 Now I wish to do the same using the forecast package. However, I'm having difficulty specifying the weights:

The above prints an error:

How can I use tslm to forecast a time series with weights?

This is an issue with lm.

produces the exact same error. If you read the source code to tslm, you'll find that lm is called in more or less the sam way.

I found here that ..1 means the first argument included in ..., which in this case is the only argument, weights. It suggests that this kind of error could be caused because argument being passed doesn't exist in the environment from which the function is being called. You can see this behavior with wrapper(ts.input~x,weights=foo) if you don't have any object called foo.

Running a traceback on wrapper(ts.input~x,weights=ts.weights) reveals:

And in the source code of lm,

which suggests that the call to model.frame is picking up on the ... in a strange way.

A closure, of course, is a function in R. Which can mean only one thing... weights is already a function in the global environment. Indeed, ?weights reveals that it's ironically the extractor function for model weights. It's a no-brainer that it gets search priority over local variables. So I changed the argument names (since formula is also a function):

And if you run traceback you still get the same issue with model.frame. So I'm completely baffled. My only conclusion is that a) it has nothing to do with tslm or time series analysis, and b) the problem lies somewhere in the way arguments are passed around inside lm.

That probably doesn't help you at all, but hopefully at least someone can come along and explain what's going on here. My provisional answer to your actual question of how to use weights in tslm is that you can't.

Not the answer you're looking for? Browse other questions tagged r time-series forecasting or ask your own question.