Dealing with non-normal distribution in "big" datasets, when do we throw out the CLT?

Apologies from the go as this question comes from an absolute newbie and will definitely not satisfy a lot of the detail required. Hence, your guidance in providing you the right information to allow for the adequate answering of my question may be inevitable.

A brief summary of what's nagging at my mind currently. I have received a dataset from a colleague, which contains ~5000 patients and we're trying to determine how an initial treatment affects various outcome variables. Some of these are categorical (with 3 levels), some are continuous. The categorical variable is currently the least of my concerns, because as far as I can tell, I would have to perform multivariate regression, perhaps using MANOVA, to see how this dependent variable is affected by the other independent variables. 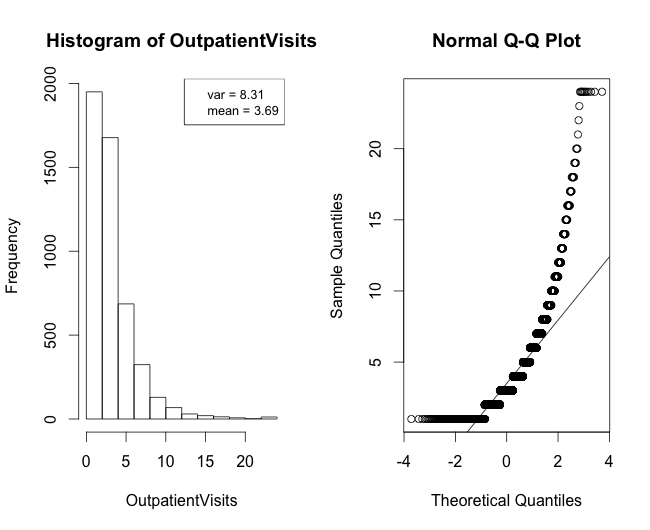 Now the time to heal is what's really bugging me. Some people would argue, that this would require linear regression modelling, but what I can't get my head around, is that time to heal, cannot be zero or take on negative numbers. And if one looks at the distribution of the data, it looks a lot more Poisson than anything else (Figure 2). So would this in fact require Poisson regression? Also biologically, time to heal is probably not completely linear, but more along what we see in cell culture growth, that it has a more exponential pattern, with a linear phase in it. 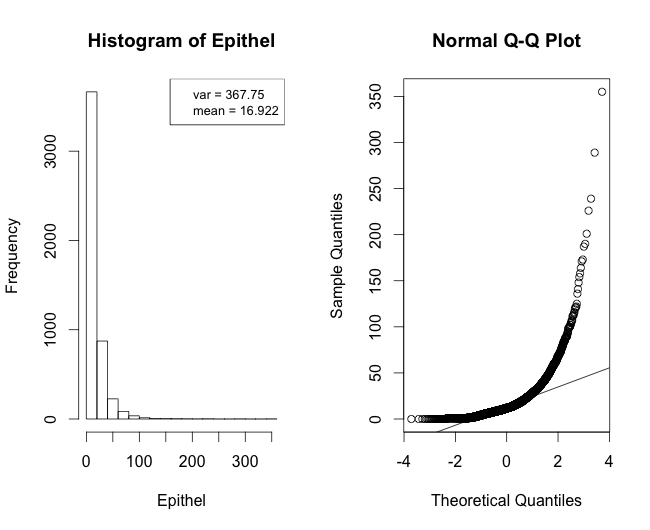 If I log-transform my data, things start to look quite ok (Figure 3)...but is a linear model adequate as the values cannot be negative or zero? 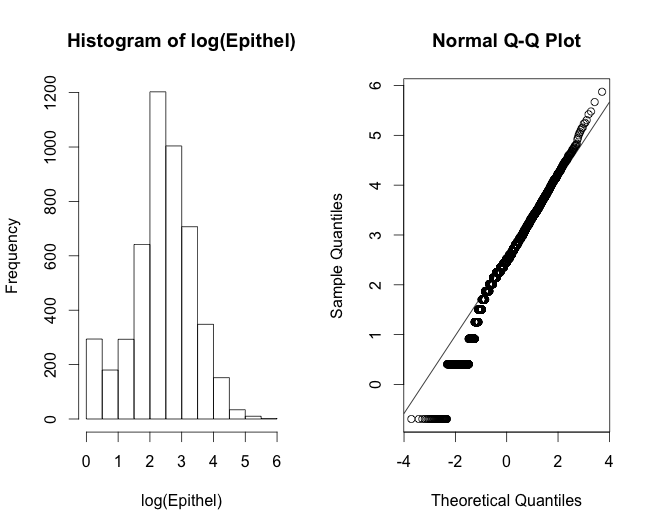 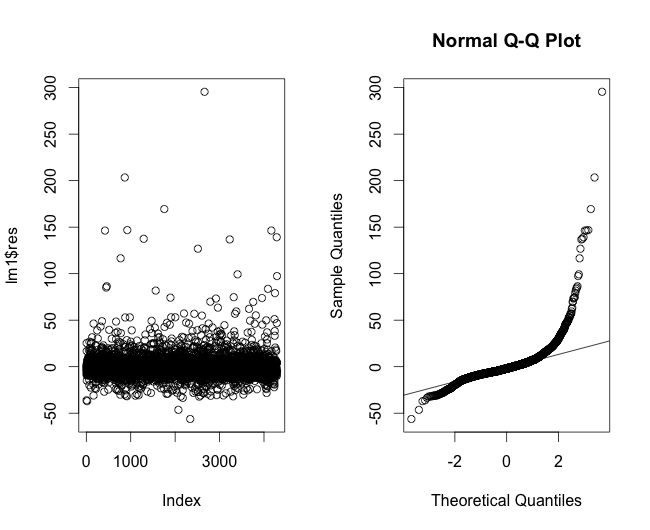 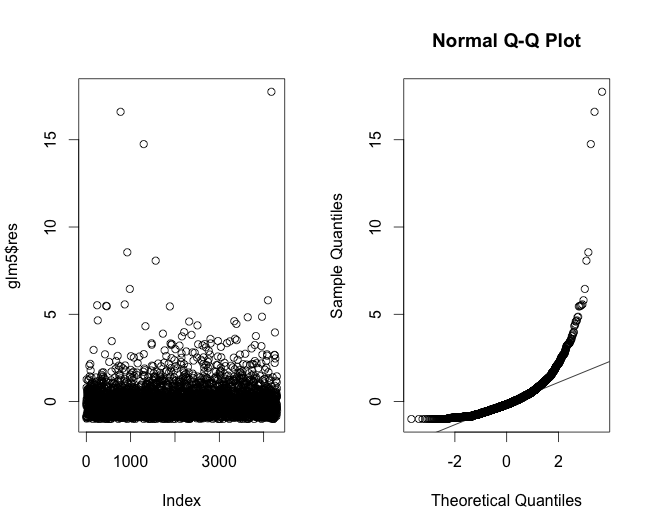 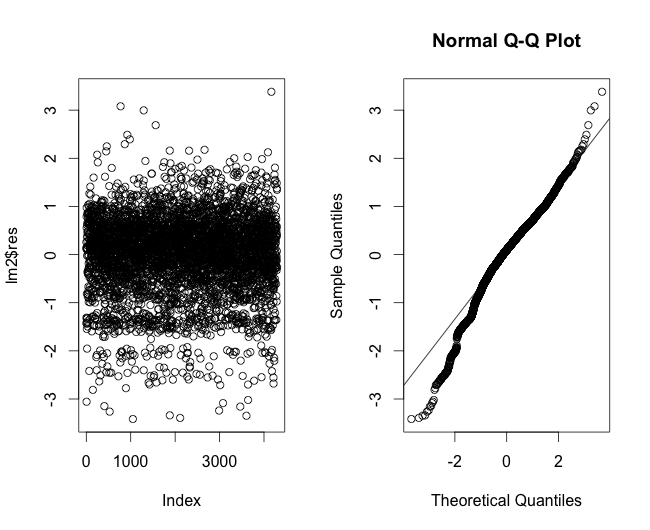 Just by looking at what you have here, what more information would you require? Am I going down a completely wrong path here? And if we assume an exponential curve for time to heal, what do I have to do to correct for this in my modelling process? And just because of the rule of numbers, could I spare myself all this thinking and simply assume that the CLT holds true?

I am very new to this, so any guidance would be more than welcome.

Hope not to have wasted anyone's time and apologize if I'm not posting crucial information here. Happy to learn, what more is required.

It is very unclear why you are dwelling on the CLT. What matters for your purpose is robustness and goodness of fit. For time-to-event data it is common to use a semiparametric survival model such as the Cox proportional odds model. You can also use the proportional odds ordinal logistic model, if there is no censoring. Such an ordinal model can handle the other outcome variables. Both proportional hazards and other ordinal models do not require you to select a transformation for $Y$, and they handle arbitrary clumping (e.g., at zero days).

Among other problems with "CLT thinking" is its false assumption that standard deviations are good measures of dispersion for asymmetrically distributed $Y$.

I think you're correct in your thought that perhaps you should use something like Poisson regression for your count variable. There are some alternatives, but Poisson regression would be the first thing I'd consider. However, from the look of some of your plots, it's possible you'll need something heavier tailed, like a negative binomial.

I'd initially be considering some form of GLM for all your response variables. This will also make it easier to deal with the curvature (via use of appropriate link functions).

You mention censoring in your comment below; you're right not to ignore the censoring - Cox proportional hazards (which you mentioned) is a standard thing to try but there are other options available.

OP, I may be misreading you: if I am, please let me know and I'll delete this answer.

It seems to me that you are fundamentally confused about what the CLT means. Nobody else has pointed this out, so perhaps I am wrong -- again, if so, please chime in.

If I log-transform my data, things start to look quite ok (Figure 3)

What exactly do you mean when you say "the central limit theorem holds true"? If I am reading you correctly, you believe that, given a large enough sample size, all distributions become normal -- and that is false.

To give a concrete example: if $X_i$ are i.i.d. Uniform on $[0, 1]$, then $\frac{1}{n}\sum_{i=1}^nX_i$ will be asymptotically normally distributed as $n\rightarrow\infty$. But that does not mean that, given a large sample size, you should expect a histogram of the $X_i$s to look like a normal distribution.

The central limit theorem is an asymptotic result, which means that it has to hold as $n \rightarrow \infty$ (under certain regularity conditions), large enough is too vague a term.

In your case the distribution has a very heavy right tail (judging from the variance computed in figure 2). Thus, the occasional large value can make up a big chunk of the sum.

To make ideas clearer suppose 100 numbers sampled from the true distribution yielded 98 zeros and 2 numbers with value 300. Your estimate of the mean will be 6 which is far more affected by the occasional large numbers (300).

The distributions of $X$ and $Y$ are not important

The distribution of $X$ and $Y$ don't matter to linear regression. Recall the usual assumptions of the ordinary least squares. Nowhere it says anything about the shape of the dependent and independent variable.

To believe it, run this regression in R:

Both $X$ and $Y$ are exponentially distributed, regression still finds the right parameter.

The normality of the errors is overrated

You showed us that the residuals are not normal. Okay, what does that actually tell you? Very little. It doesn't mean the estimates are wrong, try this in R:

And see, even with exponential errors, the regression is still on the mark.

The fact is: normality of the errors only matters to the estimation of confidence intervals and p values. What if you really need confidence intervals or p-values and the residuals aren't normal? Use bootstrap.
A real problem is outliers (see those residuals at 15 in your plot?), those do bias results and you might have to remove them, or use some robust regression or both.

Your real problem is model selection

What I see is that you have many models you can feed this data to. You are asking us to pick one. We can't answer that for you. You have to do this on your own. Luckily it's pretty easy to do. Run all the models you can think of. All the regressions, with all the transformations of the data and all the permutations of regressors. Then choose the one that predicts better.

Learn cross-validation. Which is easy and does precisely that. Choose the model with the lowest cross-validated error

238
Algorithms for automatic model selection
36
Can you overfit by training machine learning algorithms using CV/Bootstrap?
24
Cross Validation (error generalization) after model selection
7
How to avoid overfitting when using crossvalidation within Genetic Algorithms
6
Cumulative Hazard Function where "status" is dependent on "time"
1
Can someone help me with the interpretation of this cox proportional hazards model and how to cross-validate it?

4
How to analyze residuals of Poisson log-linear model?
19
How do I perform a regression on non-normal data which remain non-normal when transformed?
3
What is a statistical significance test for two Poisson distributions?
3
What is the appropriate regression type and approach when dealing with multiple continuous and categorical variables?
4
Prediction interval with non normal data
1
What regression model is best to predict a severely non-normal outcome with negative values