How to visualize a range (min/med/max)?

I'm looking for a visually compelling yet immediately understandable way to visualize a range of data (min, median, max)

What new ways can you think of to visualize this type of data?

Here are some examples:

Example 1: Here is how a range of data and a comparison is displayed on Glassdoor:

Example 2: Here is how a range of data and a comparison is displayed on Indeed:

Example 3: Here is another very similar example from CareerBuilder:

Example 4: and Trucar's visualization of a range of data (car prices paid by many users).
This is likely pushing the realm of understandability by an average audience. 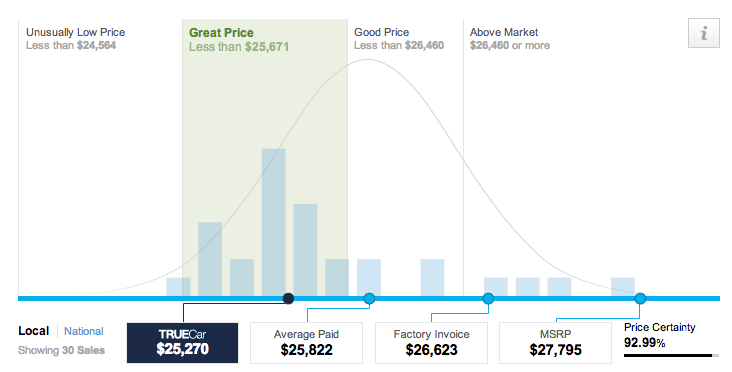 Example number 1 seems to be nice if you have different minimum thresholds among the categories.

As pointed by Glen_b and whuber, it seems that examples number 2 and number 3 do not show the ranges of your categories, but just one unique statistic (it could be the median, or the maximum values) at the top of the horizontal bars.

The example number 4 is a little bit strange because the bell curve does not represent the distribution of the bars (for example, the blue light dot 'average paid' is the average of the bell curve, not the average of quantities shown in the bars). It is not "visually compelling yet immediately understandable" to me.

As you asked for another option, I would suggest the boxplot, which shows:

Each box is a category. Order the boxes from left to right starting with the category with greatest median.

The example number 1 is simpler to understand, so it will depend if a boxplot will really help.

Not the answer you're looking for? Browse other questions tagged data-visualization range or ask your own question.

8
Plotting confidence interval bars from summary statistics
8
How to interpret a box plot?

17
When is interactive data visualization useful to use?
12
Plotting summary statistics with mean, sd, min and max?
6
Comparing many performance curves: request for data visualization tips
4
Min and max range from standard deviation
1
How to interpret interquartile range?
1
Normalization when Max and Min Values are Reversed
1
Expected value of CDF evaluated at sample min/max, with respect to sample size