Why are p-values uniformly distributed under the null hypothesis?

Recently, I have found in a paper by Klammer, et al. a statement that p-values should be uniformly distributed. I believe the authors, but cannot understand why it is so.

To clarify a bit. The p-value is uniformly distributed when the null hypothesis is true and all other assumptions are met. The reason for this is really the definition of alpha as the probability of a type I error. We want the probability of rejecting a true null hypothesis to be alpha, we reject when the observed $\text{p-value} < \alpha$, the only way this happens for any value of alpha is when the p-value comes from a uniform distribution. The whole point of using the correct distribution (normal, t, f, chisq, etc.) is to transform from the test statistic to a uniform p-value. If the null hypothesis is false then the distribution of the p-value will (hopefully) be more weighted towards 0.

The Pvalue.norm.sim and Pvalue.binom.sim functions in the TeachingDemos package for R will simulate several data sets, compute the p-values and plot them to demonstrate this idea.

for some more details.

Since people are still reading this answer and commenting, I thought that I would address @whuber's comment.

It is true that when using a composite null hypothesis like $\mu_1 \leq \mu_2$ that the p-values will only be uniformly distributed when the 2 means are exactly equal and will not be a uniform if $\mu_1$ is any value that is less than $\mu_2$. This can easily be seen using the Pvalue.norm.sim function and setting it to do a one sided test and simulating with the simulation and hypothesized means different (but in the direction to make the null true).

As far as statistical theory goes, this does not matter. Consider if I claimed that I am taller than every member of your family, one way to test this claim would be to compare my height to the height of each member of your family one at a time. Another option would be to find the member of your family that is the tallest and compare their height with mine. If I am taller than that one person then I am taller than the rest as well and my claim is true, if I am not taller than that one person then my claim is false. Testing a composite null can be seen as a similar process, rather than testing all the possible combinations where $\mu_1 \leq \mu_2$ we can test just the equality part because if we can reject that $\mu_1 = \mu_2$ in favour of $\mu_1 > \mu_2$ then we know that we can also reject all the possibilities of $\mu_1 < \mu_2$. If we look at the distribution of p-values for cases where $\mu_1 < \mu_2$ then the distribution will not be perfectly uniform but will have more values closer to 1 than to 0 meaning that the probability of a type I error will be less than the selected $\alpha$ value making it a conservative test. The uniform becomes the limiting distribution as $\mu_1$ gets closer to $\mu_2$ (the people who are more current on the stat-theory terms could probably state this better in terms of distributional supremum or something like that). So by constructing our test assuming the equal part of the null even when the null is composite, then we are designing our test to have a probability of a type I error that is at most $\alpha$ for any conditions where the null is true.

This result is general: the distribution of an invertible CDF of a random variable is uniform on $[0,1]$.

from which we can conclude that the distribution of $P$ is uniform on $[0,1]$.

I think the answer as to "Why are p-values uniformly distributed under the null hypothesis?" has been sufficiently discussed from a mathematical perspective. What I thought is missing is a visual explanation of this and the idea of thinking of p-values as areas to the left of a set of quantiles under a given continuous distribution (probability density function). By quantiles I mean cut-off points along a distribution (in this example the standard normal distribution), which split the distribution into equal parts containing exactly the same area under the curve.

This step, i.e. the step from Fig 1A to Fig 1B is puzzling for many people and has been for me as well for some time - until I started thinking of p-values as areas under the curve. My thought was that if I split the standard normal distribution into equal chunks containing the same area (in this case 0.1 to match the histogram in Fig 1B), I will have larger intervals in the tails (Fig 1C). Now if I go back to Fig 1A, I will be able to fit all points ranging from -4 to -1.28 (the interval in Fig 1C) into the first bin of Fig 1B since they all result into areas (or p-values) of less than or equal to 0.1. As the density of points is increasing towards the mean, the intervals that cover an area of 0.1 are becoming increasingly smaller (Fig 1C) but the number of points in those intervals remains roughly equal and in this case matches the count in Fig 1B. 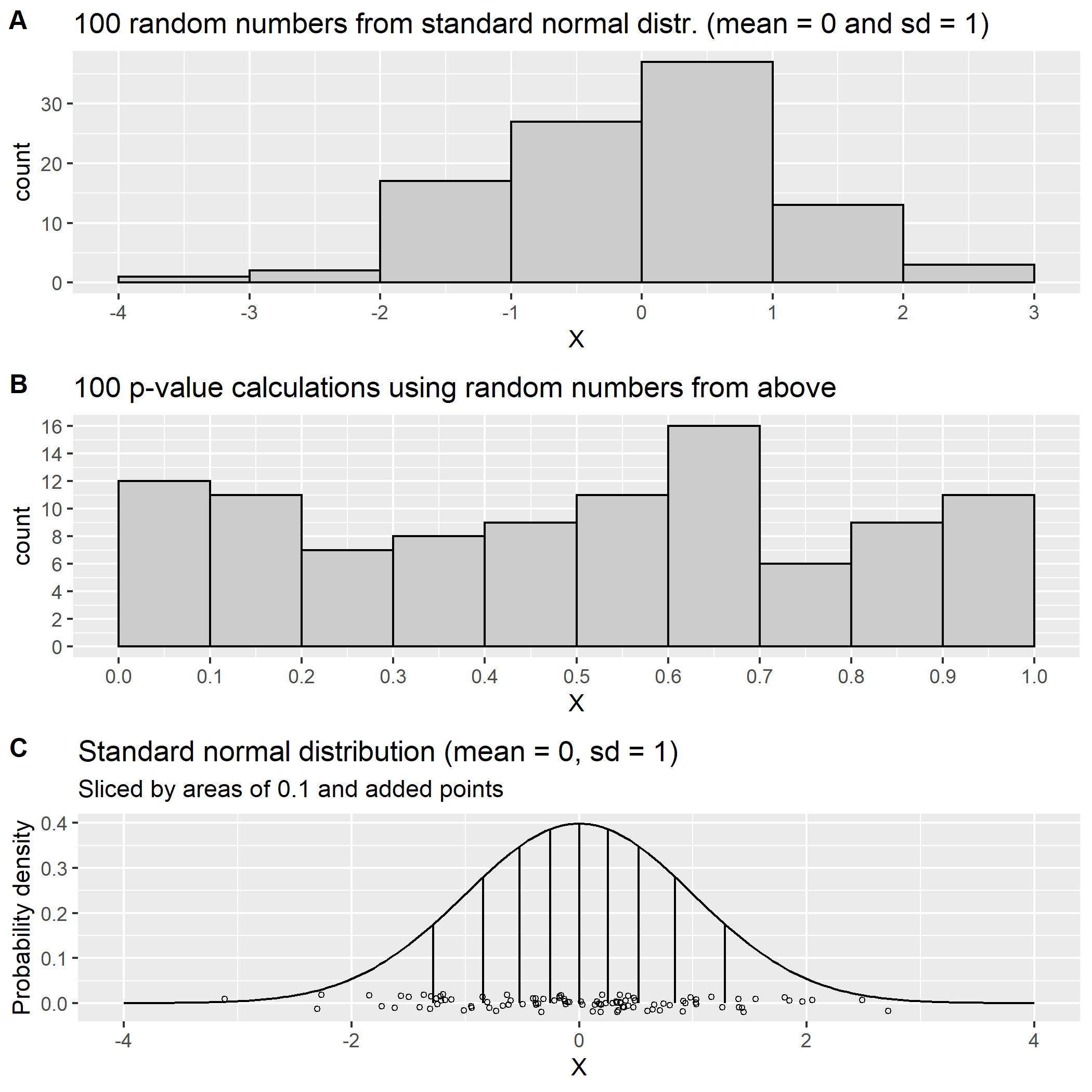 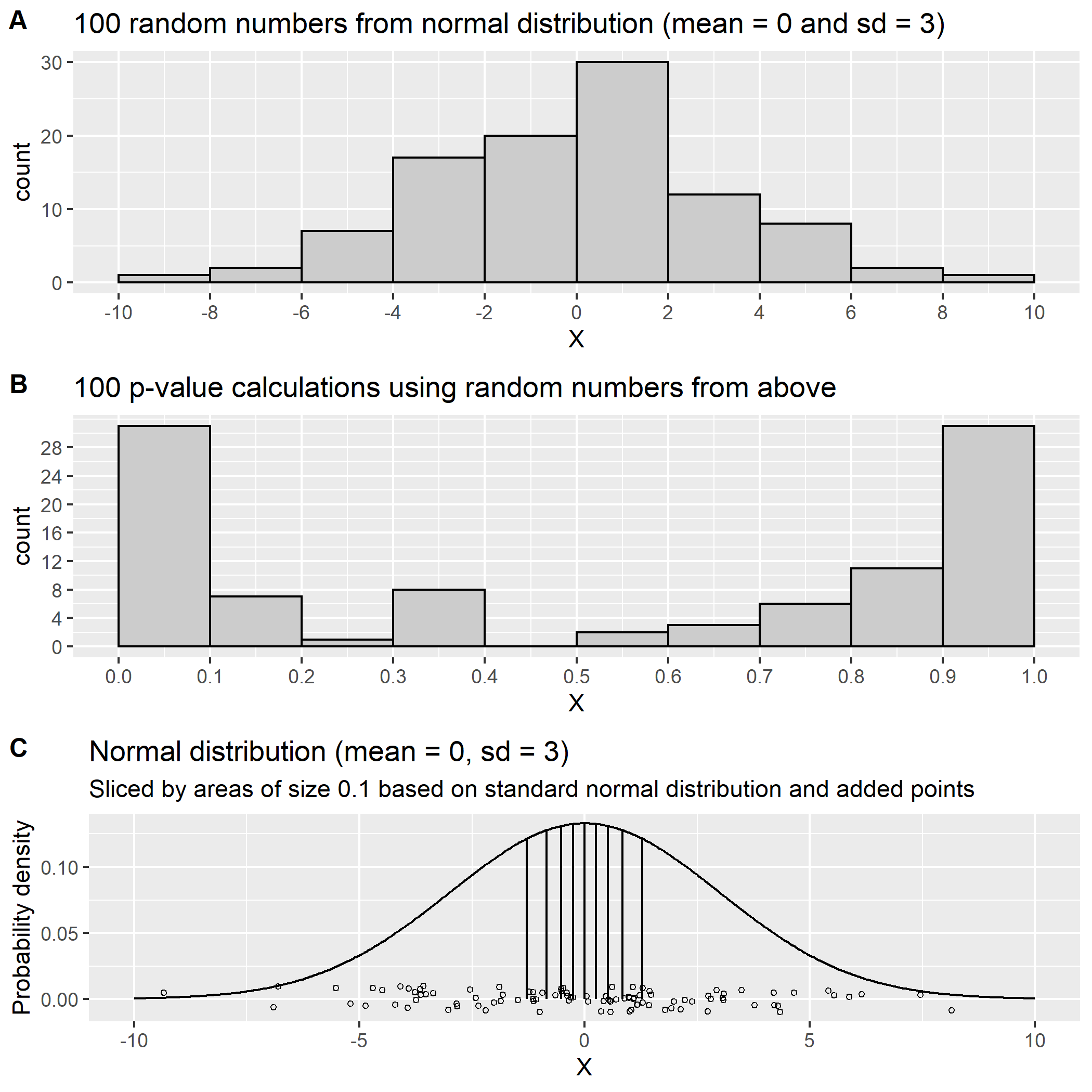 I hope this was not overly confusing and added some value to this thread.

Simple simulation of distribution of p-values in case of linear regression between two independent variables :

Not the answer you're looking for? Browse other questions tagged p-value uniform-distribution or ask your own question.

8
Understanding scipy Kolmogorov-Smirnov test
2
Chi2 test on big uniformly random sample
2
Why do p-values have uniform distribution for normally distributed data
0
Long-run behavior of p-values? (simulation)
1
Chi Square Tests throws varying p-value results
0
Understanding why p value is uniformly distributed
31
Is the exact value of a 'p-value' meaningless?
8
Why do I get this p-value doing the Jarque-Bera test in R?
10
Why are 0.05 < p < 0.95 results called false positives?
10
The distribution of the p-values under the null hypothesis is uniform(0, 1)
See more linked questions