I know correlation does not imply causation but instead the strength and direction of the relationship. Does simple linear regression imply causation? Or is an inferential (t-test, etc.) statistical test required for that?

regression correlation causality
Share
Improve this question
edited May 12, 2011 at 6:44

The quick answer is, no. You can easily come up with non-related data that when regressed, will pass all sorts of statistical tests. Below is an old picture from Wikipedia (which, for some reason has recently been removed) that has been used to illustrate data-driven "causality".

We need more pirates to cool the planet? 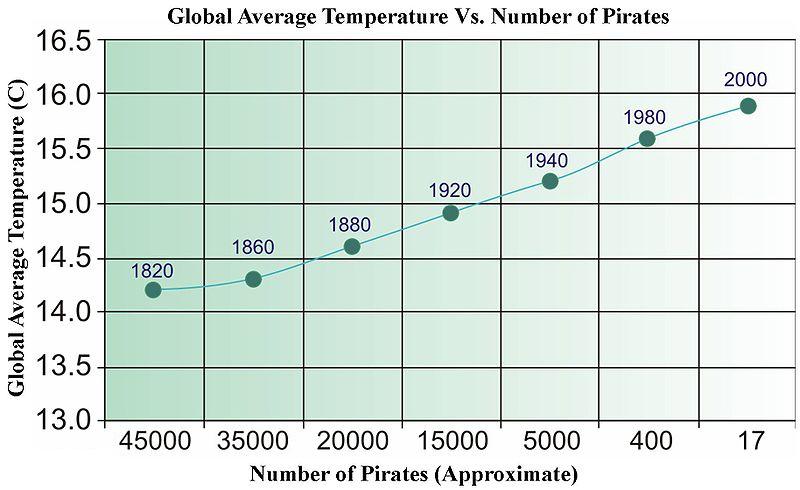 For time series, there is a term called "Granger Causality" that has a very specific meaning.

Other than that, "causality" is in the eye of the beholder.

There is nothing explicit in the mathematics of regression that state causal relationships, and hence one need not explicitly interpret the slope (strength and direction) nor the p-values (i.e. the probability a relation as strong as or stronger would have been observed if the relationship were zero in the population) in a causal manner.

That being said, I would say regression does have a much stronger connotation that one is estimating an explicit directional relationship than does estimating the correlation between two variables. Assuming by correlation you mean Pearson's r, it typically does not have an explicit causal interpretation as the metric is symmetrical (i.e. you can switch which variable is X and which is Y and you will still have the same measure). Also the colloquialism "Correlation does not imply causation" I would suspect is so well known that stating two variables are correlated the assumption is one is not making a causal statement.

Estimated effects in regression analysis are not symetrical though, and so by choosing what variable is on the right hand side versus the left hand side one is making an implicit statement unlike that of the correlation. I suspect one intends to make some causal statement in the vast majority of circumstances in which regression is used (inference vs prediction aside). Even in cases of simply stating correlations I suspect people frequently have some implied goals of causal inference in mind. Given some constraints are met correlation can imply causation!

Neither correlation nor regression can indicate causation (as is illustrated by @bill_080's answer) but as @Andy W indicates regression is often based on an explicitly fixed (i.e., independent) variable and an explicit (i.e., random) dependent variable. These designations are not appropriate in correlation analysis.

"In regression we intend to describe the dependence of a variable Y on an independent variable X... to lend support to hypotheses regarding the possible causation of changes in Y by changes in X..."

"In correlation, by contrast, we are concerned largely whether two variables are interdependent or covary - that is, vary together. We do not express one as a function of the other."

The notion of Granger causality is interesting.

where Var(.) and Cov(.) are estimates from sample (data).

Consequently, these parameters themselves are nothing else than some functions of correlation between x and y. Especially, beta is just a "normalised" correlation coefficient. So, theres is no more implied causality in regression than in correlation. Causal regression is a special technique in econometrics where one would have to rely on e.g. instrumental variables to get around phenomenons like confounding that obscure the causal interpretation of any particular regression model.

My point is: regression can be made causal but it is not causal y default.

For more see these videos: https://www.youtube.com/watch?v=Sqy_b5OSiXw&list=PLwJRxp3blEvaxmHgI2iOzNP6KGLSyd4dz&index=55&t=0s

The "Rubin model" by Rubin himself: http://www.stat.columbia.edu/~cook/qr33.pdf

Great introductory course on causality (though, no regression yet): https://www.coursera.org/learn/crash-course-in-causality

My understanding (I'm a causality beginner) is the following:

Note that we can't test whether $E(\epsilon|X)=0$, and there is some circularity in the arguments here.

Regression ASSUMES a causal relationship....if there is no basis for causality as a result of physical/intellectual/scientific analysis of the issue, there is no basis for a causal analysis and no basis for a regression. This is why the FDA and similar government agencies are always proclaiming "This causes that!" only to retract it years and billions of dollars in damage, later. Examples are legion: coffee, chocolate, caffeine, bacon, eggs, etc....

Worse yet is when two variable have a feedback loop. One may cause the other at one point; only for the other to cause the one, later. This always happens in my field, economics: which is why most economic analysis isn't worth the paper it is printed on.

Not the answer you're looking for? Browse other questions tagged regression correlation causality or ask your own question.

0
Causality of the regression
101
Under what conditions does correlation imply causation?
50
What do "endogeneity" and "exogeneity" mean substantively?
33
Under which assumptions a regression can be interpreted causally?
7
Correlation, regression and causal modeling
4
Does regression analysis measure cause and effect?
3
Linear regression and causality in a randomized controlled experiment
3
Regression: Is it problematic to include a predictor when the outcome variable is based on it?