Do random forest measures of variable importance (mean change of accuracy, mean change of Gini index) take the interactions into account? I think I know how we come up with the variable importance plot (by permuting each of the predictors), and it doesn't seem that random forest captures the interaction. Does anybody have another point of view? Thanks.

Gini importance is found often to be in concordance with permutation importance, and I see it as a similar measure.

There is however something called interaction which is measured in random forests, and this measures if a split on a given variable increase or decrease splits on other measure. This can be computed for each pair of measures. It looks like a 2 measure interactions. If one want to measure interactions with more than 2 variables than I suppose it is possible extending the given procedure, but soon becomes too computer intensive.

Last thing called interactions is not implemented in R package randomForests as far as I know. Take a look on the brief description from the Breiman's page on RF here, and check for Interactions section.

Run this code and assert that RF variable importance do incorporate interactions.

You should see X1 and X2 are found the important and X3 and X4 are not. y is only explained as the interaction between X1 and X2, alone both variables are useless. 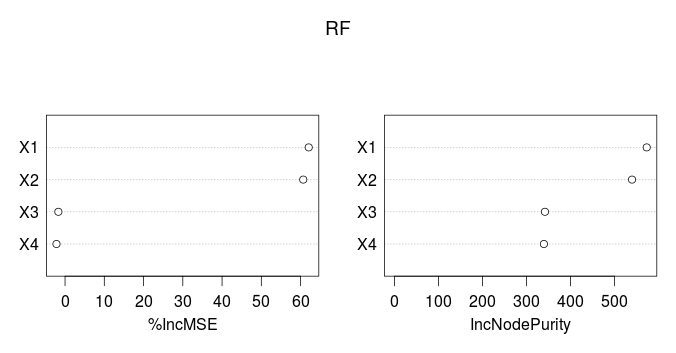 Not the answer you're looking for? Browse other questions tagged random-forest importance or ask your own question.