I am measuring the frequency of consonants in a sample lexicon of a language. The results are as follows:

The question I am actually really interested is the following:

The most frequent consonant is p, but is this significant?

What test should I use? Is it ok to simply use a $\chi^2$ test for goodness of fit on the frequencies of p and t only?

Not directly, because the categories you chose to compare are based on their observed values.

That is, you need to compute a new distribution for the test statistic.

Please also note that if you've already made one comparison (such as the overall chi-squared) and the decision to make this comparison is conditional on that one, the test is also affected by that conditional decision.

Here's the situation as I comprehend what's going on.

We decide to test for equality of proportion among two categories. We can construct a chi-square goodness of fit test in the usual manner, by conditioning on their total:

(However, this is effectively a one-tailed test, since we know the observed p-count is greater than the observed t-count.)

Then we can, of course, compute a chi=square test statistic:

The p-value may not mean much, but the statistic is still a measure of the size of the difference between the two.

So how do we generate the distribution under the null? It depends on what we assume about the situation and whether this is a post hoc test.

As an example, let's say we are in the situation where we have the 6-category table without any previous test and we're interested in the question "Is the most common one unusually more common than the second-most common one?" against the null that they're just both coming from a distribution where all 6 categories are equally likely

Then we can easily simulate from the distribution under the null. This:

generates a single observation from that null. We can repeat that many times to get a sense of what the distribution looks like: 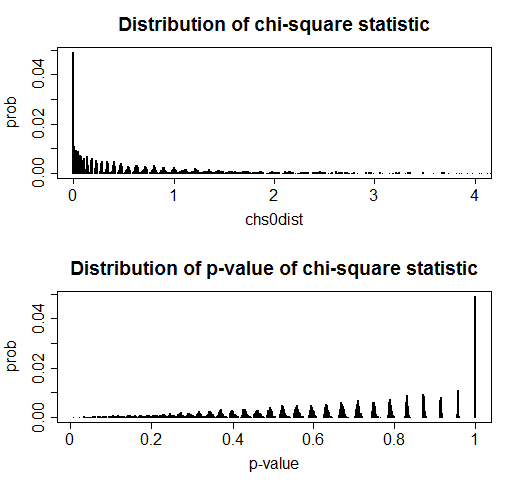 Because of the discreteness, it's a bit hard to tell if that's well approximated by the $\chi^2_1$ distribution or not, but a look at the mean and variance suggests not. If we match by mean and variance, however, an appropriately scaled version of the statistic has approximately the right distribution at a different d.f., particularly in the lower tail (of the p-values, i.e. the upper-tail of the chi-square): 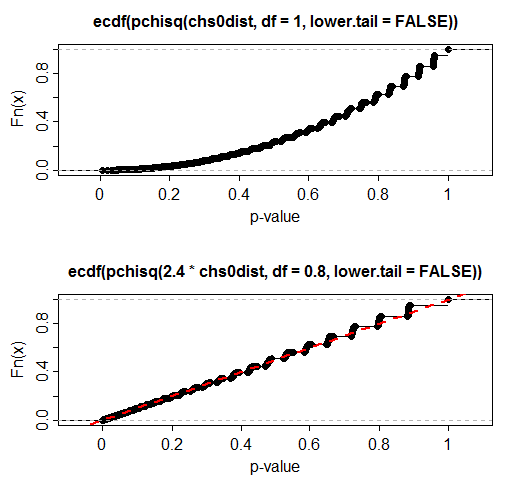 If we now look at the original data:

This approach suggests a p-value of around 0.1 using a chi-=square statistic and a modified chi-square distribution. If we compute the p-value directly from the simulated distribution, we get a p-value of 0.0993.

In other words, can I claim that p is the most frequent consonant?

While I think it's possible to do something like that, I don't think testing the most popular against the second most popular is necessarily the best approach. We could simply consider, for example, the distribution of the proportion of the largest group under the null of equal proportions.

Not the answer you're looking for? Browse other questions tagged frequency or ask your own question.

3
Significance of most frequent answer
1
Comparing category distributions
0
Excel: which products are most frequently ordered together? (clustering question)
0
how to tabulate reference category
3
How do I find the mean of counts of reported events when the last category is “5 or more”