For me the pdf gives the whole probability to a certain point(basically the area under the probability).

The pmf give the probability of a certain point.

The cdf give the probability under a certain point.

So to me the pdf and cdf have the same information, but the pmf does not because it gives the probability for a point x on the distribution.

The cdf applies to any random variables, including ones that have neither a pdf nor pmf 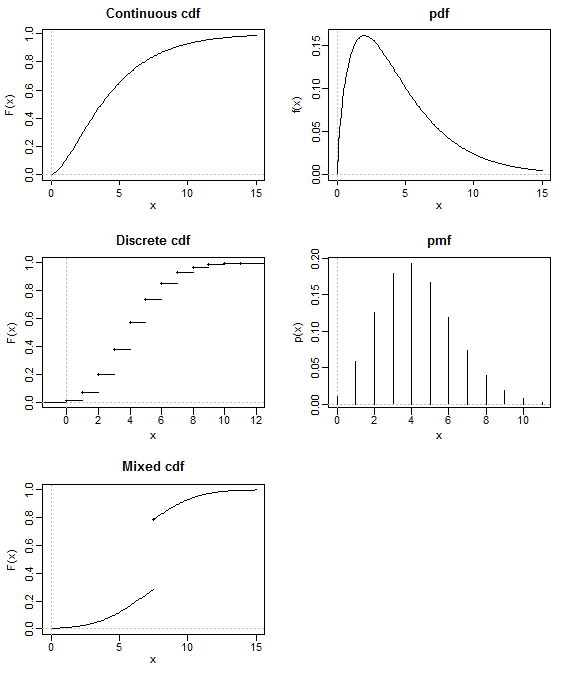 (such as a mixed distribution - for example, consider the amount of rain in a day, or the amount of money paid in claims on a property insurance policy, either of which might be modelled by a zero-inflated continuous distribution).

PMFs are associated with discrete random variables, PDFs with continuous random variables. For any type of random of random variable, the CDF always exists (and is unique), defined as $$F_X(x) = P\{X \leq x\}.$$ Now, depending on the support set of the random variable $X$, the density (or mass function) need not exist. (Consider the Cantor Set and Cantor Function, the set is recursively defined by removing the center 1/3 of the unit interval, then repeating the procedure for the intervals (0, 1/3) and (2/3, 1), etc. The function is defined as $C(x) = x$, if $x$ is in the Cantor set, and the greatest lower bound in the Cantor Set if $x$ is not a member.) The Cantor Function is a perfectly good distribution function, if you tack on $C(x)= 0$ if $x < 0$ and $C(x) = 1$ if $1 < x$. But this cdf has no density: $C(x)$ is continuous everywhere but its derivative is 0 almost everywhere. No density with respect to any useful measure.

So, the answer to your question is, if a density or mass function exists, then it is a derivative of the CDF with respect to some measure. In that sense, they carry the "the same" information. BUT, PDFs and PMFs don't have to exist. CDFs must exist.

The other answers point to the fact that CDFs are fundamental and must exist, whereas PDFs and PMFs are not and do not necessarily exist.

This confused and intrigued me (being a non-statistician), as I did not know how to interpret a CDF (or how it might exist) when the sample space was not ordered; think, for example, of the circle $S^1$.

Not the answer you're looking for? Browse other questions tagged probability distributions density-function inference cumulative-distribution-function or ask your own question.

0
Do We Need CDF, When We Have A PDF?
49
Are CDFs more fundamental than PDFs?
2
Get probability distribution function from density function

3
What is the link (discrepancy?) between these PDF/CDF and p-value distributions?
0
What information does a probability density function (PDF) graph provide?
6
CDF*[1-CDF]/PDF --- name? integrable?