Under what circumstances is an MA process or AR process appropriate?

When would one of either of these two situations occur? Does anyone have a solid example that illuminates the underlying issue regarding what it means for a process to be best modeled as MA vs AR?

One important and useful result is the Wold representation theorem (sometimes called the Wold decomposition), which says that every covariance-stationary time series $Y_{t}$ can be written as the sum of two time series, one deterministic and one stochastic.

The second term is an infinite MA.

(It's also the case that an invertible MA can be written as an infinite AR process.)

If you have the process written in one form you can often convert it to the other form.

So in one sense at least, for covariance stationary series, often either AR or MA will be appropriate.

Of course, in practice we would rather not have very large models. If you have a finite AR or MA, both the ACF and PACF eventually decay away geometrically (there's a geometric function that the absolute value of either function will sit below), which will tend to mean that a good approximation of either an AR or an MA in the other form may often be reasonably short.

So under the covariance stationary condition and assuming we can identify the deterministic and stochastic components, often both AR and MA may be appropriate.

Box and Jenkins methodology looks for a parsimonious model -- an AR, MA or ARMA model with few parameters. Typically the ACF and PACF are used to try to identify a model, by transforming to stationarity (perhaps by differencing), identifying a model from the appearance of the ACF and PACF (sometimes people use other tools), fitting the model and then examining the structure of the residuals (typically via the ACF and PACF on the residuals) until the residual series appears reasonably consistent with white noise. Often there will be multiple models that can provide a reasonable approximation to a series. (In practice other criteria are often considered.)

There are some grounds for criticism of this approach. For one example, the p-values that result from such an iterative process don't generally take account of the way the model was arrived at (by looking at the data); this issue might be at least partly avoided by sample splitting, for example. A second example criticism is the difficulty of actually obtaining a stationary series - while one may in many cases transform to obtain a series that seems reasonably consistent with stationarity, it's not usually going to be the case that it really is (similar issues are a common problem with statistical models, though perhaps it may sometimes be more of an issue here).

[The relationship between an AR and the corresponding infinite MA is discussed in Hyndman and Athana­sopou­los' Forecasting: principles and practice, here]

This is the simplest example that I could come up with to help visualize AR, MA and ARMA processes.

Note that this is just a visual aid for an intro into the subject and by no means rigorous enough to account for all possible cases.

Assume the following: We have two agents in a competition who are tasked with performing a certain kind of action (jump horizontally to the right).

Also, There are two games that are to be played by both agents with each game involving two jumps:

The below chart shows which model would best describe each of the four scenarios associated with the above actors and games. 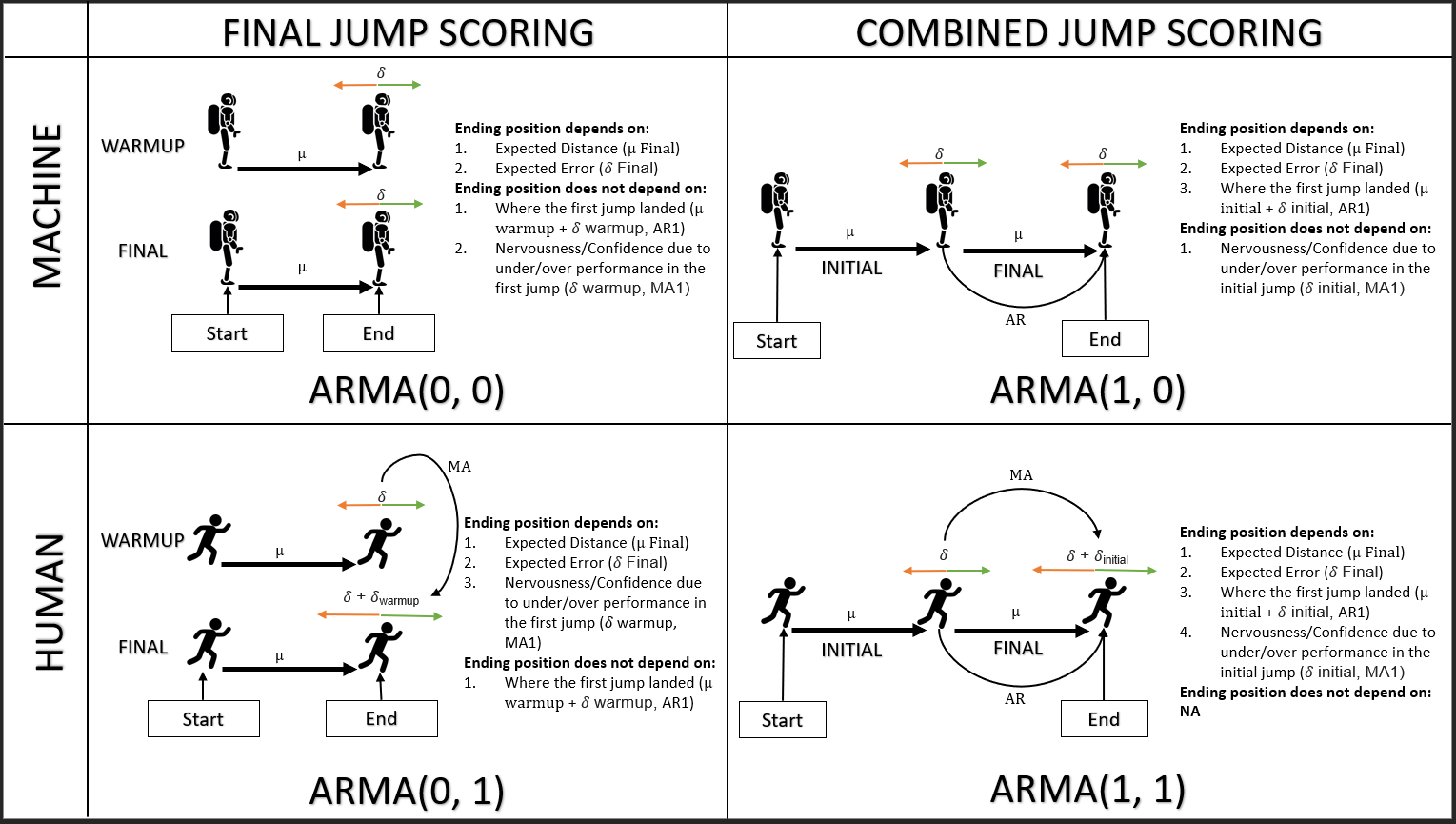 So you have a univariate time series and you want model it/forecast it, right? You have chosen to use an ARIMA type model.

The parameters of the depend on what's best for your dataset. But how do you find out? A recent approach is "Automatic time series forecasting" by Hyndman & Khandakar (2008) (pdf).

The algorithm tries different versions of p, q, P and Q and chooses the one with the smallest AIC, AICc or BIC. It is implemented in the auto.arima() function of the forecast R package. The choice of information criterion depends on the which parameters you pass to the function.

For a linear model, choosing a model with the smallest AIC can equivalent to leave-one-out cross-validation.

You should also make sure that you have enough data, at least four years.

Explicit answer to Firebug's comment below: When your data supports it.

Not the answer you're looking for? Browse other questions tagged time-series autoregressive moving-average or ask your own question.

2
Method to remove bad values in time series (bad values known to take on a particular value)
28
How to understand SARIMAX intuitively?
4
How to plot spectra of an AR(2) process
0
What is the name of this 'autoregressive'-like process?
0
How the error is generated in MA process?
3
How to properly utilize lag and errors in Time Series modelling
0
Why do these independant variables have significant explanatory power, when 'theoretically' they should have none? (Self contained example inside)