For answering my research question I am interested in the correlation between the random slopes and random intercepts in a multilevel model, estimated using the R library lme4.

The data I have is: Y (test-scores from students), SES (socio-economic status for each student) and schoolid (ID for each school).

I am using the following syntax to estimate random intercepts and slopes for the schools:

The reference I used for this syntax is this pdf:

However, when I look at the results:

I am getting the following output:

As stated in the output, the correlation between the random slopes and random intercepts equals 1.00. I find this hard to believe. When I call in R:

I am getting the following output which gives the correlations and covariance matrix:

It seems as if the correlation between the slopes and intercepts was set to 1.00 by R. I did not see this in the output of anyone else when I was searching the internet on references on multilevel modelling.

I have tried to simulate data in order provide the code for a small reproducible dataset. I was however not yet able to reproduce this output by means of simulated data. As far as I have the code I will eidt my post and add the code.

Edit: In response to a comment by Roman Luštrik, the following plot:

As there are in total 179 schools the plot becomes quite chaotic, therefore I included the first 10 schools only to make it readable: 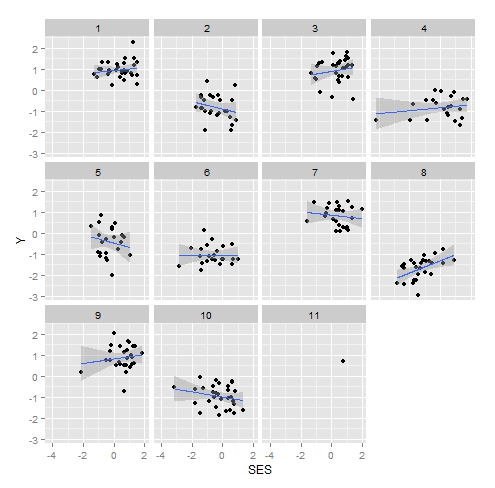 Here is the answer by @ben-bolker mentioned in the comments, which links to the R-sig-ME mailing list, posted here for completeness:

Yes, you don't have enough information (or equivalently there is too much noise) in your data to uniquely identify the full variance-covariance matrix, so the results are 'singular'; that is, one of the underlying components is identified as zero. Common symptoms of this situation include either variances equal to zero (or nearly equal, although I see in your case that the variances while small are not exactly zero) or correlations equal to +/- 1.

http://rpubs.com/bbolker/4187 shows some simulated examples where the estimated variance collapses to zero (despite the true, simulated model having a non-zero among-group variance). Presumably one could make up similar examples (with randomized-block designs/random-slope models) that would show analogous situations of correlations collapsing to +/- 1.

It's a little bit surprising that you have encountered this problem since it is most commonly a problem with small numbers of levels in the grouping variables, which doesn't appear to be the case here.

Not the answer you're looking for? Browse other questions tagged r mixed-model lme4-nlme repeated-measures random-effects-model or ask your own question.