How odd is a cluster of plane accidents?

Original question (7/25/14): Does this quotation from the news media make sense, or is there a better statistical way of viewing the spate of recent plane accidents?

However, Barnett also draws attention to the theory of Poisson distribution, which implies that short intervals between crashes are actually more probable than long ones.

"It seems counterintuitive, but the conclusion follows relentlessly from the laws of probability," Barnett says.

Clarification (7/27/14): What is counter intuitive (to me) is saying that rare events tend to occur close in time. Intuitively, I would think that rare events would not occur close in time. Can anyone point me to a theoretical or empirical expected distribution of the time between events under the assumptions of a Poisson distribution? (That is, a histogram where the y-axis is frequency or probability and the x-axis is time between 2 consecutive occurrences grouped into days, weeks, months, or years, or the like.) Thanks.

Clarification (7/28/14): The headline implies it is more likely to have clusters of accidents than widely spaced accidents. Lets operationalize that. Let's say that a cluster is 3 airplane accidents, and a short period of time is 3 months and a long period of time is 3 years. It seems illogical to think that there is a higher probability that 3 accidents will occur within a period of 3 months than within a period of 3 years. Even if we take the first accident as a given, it is illogical to think that 2 more accidents will occur within the next 3 months as compared to within the next 3 years. If that is true, then the news media headline is misleading and incorrect. Am I missing something?

Summary: The first sentence in the quoted BBC paragraph is sloppy and misleading.

Even though previous answers and comments provided an excellent discussion already, I feel that the main question has not been answered satisfactorily.

So let us assume that a probability of a plane crash on any given day is $p=1/365$ and that the crashes are independent from each other. Let us further assume that one plane crashed on January 1st. When would the next plane crash?

Well, let us do a simple simulation: for each day for the next three years I will randomly decide if another plane crashed with probability $p$ and note the day of the next crash; I will repeat this procedure $100\,000$ times. Here is the resulting histogram:

In fact, the probability distribution is simply given by $\mathrm{Pr}(t) = (1-p)^t p$, where $t$ is the number of days. I plotted this theoretical distribution as a red line, and you can see that it fits well to the Monte Carlo histogram. Remark: if time were discretized in smaller and smaller bins, this distributions would converge to an exponential one; but it does not really matter for this discussion.

Here is another histogram to really get this point across. It is simply a sum of the previous histogram over several non-intersecting time periods: 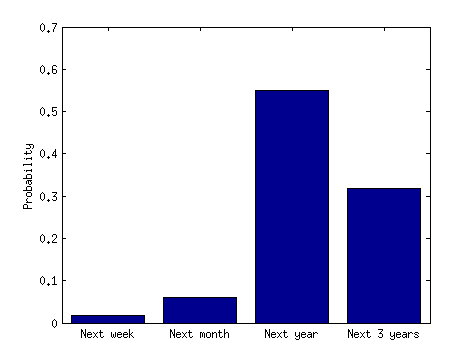 What the reporter is saying is that the random occurrence of a plane crash can be modelled as a Poisson process--a situation where the probability of an event occurring over some (small) interval is proportional to the length of said interval and where each occurrence in Independent of all others.

Is this a reasonable model for the scenario described?

Sure, these events might not be 100% Independent since other pilots likely alter their behavior (if only very slightly) after a crash. [I don't know--perhaps a few pilots do some extra bit of simulator training or something like that]. Nevertheless, the assumption of Independence is still entirely reasonable.

What about clusters of plane crashes?

Yes. Given a Poisson process (or even some other random process), you would expect to see some clusters of occurrences.

In fact, as described by the Oxford Dictionary of Statistics in its entry for Poisson Process (which is a "mathematical description of randomness"):

For example, check out this simple bit of R code: 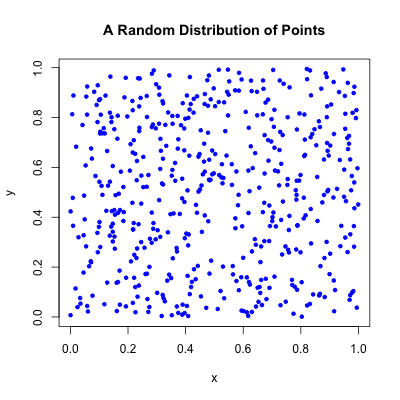 Even though we know this is a plot of random points, it sort of looks like there are some non-random bits to it--specifically, in some parts of the graph there are clumps of points while other parts are wide open. It's this same sort of behavior that the article is trying to describe (only with time series data and not spatial data).

@JoelW.: So, for instance, let's say the probability of a plane crashing tomorrow (or any day for that matter) is "p" (and, let's say "p" is something like 1 in a hundred).

Ultimately, I think that the reason these things are Counter-Intuitive is because usually when we think of a phrase like: "The odds of a plane crash in one month compared with the odds of one happening tomorrow". We naturally don't immediately consider the 24-hour period that begins in exactly one month. Instead, we (or at least I do) tend to think of it in more, well, flexibly. So more like: a month ± a week. That and the fact that we forget about taking into account the odds of a crash not happening in the interim... (But again, maybe that's just me...).

The other answers have already dealt with how independent events cluster. (Reading Gleick's Chaos, all those years ago, opened my eyes to this idea.)

But, in fact there is strong evidence that plane crashes are not independent events. Cialdini's Influence has a very good chapter on this (also mentioned here which has a couple of links to data; and I found an excerpt of that part of the book). Obviously this is highly controversial: it is basically saying that the more publicized an air crash is, the more likely it is to influence a pilot (consciously or unconsciously) to crash his plane. But the psychological explanations underlying the hypothesis seem plausible, and the data seems to support it too.

(Links to statistics-based debunking research would be welcome, in the comments.)

Not the answer you're looking for? Browse other questions tagged probability poisson-distribution or ask your own question.

5
Estimating Poisson waiting times: using the last, censored sample?
5
Annual Probability of Occurrence
1
What is the probability of one peak over threshold (POT) event in a given year?
1
Calculating the Probability that an event happens more than once with an exponential distribution
5
How to estimate the Poisson distribution with one event occurrence?
0
Royal Statistical Scociety Statistic of the Year - comparing lawn mower deaths with terror acts
0
How to estimate a probability distribution for the waiting time before an event is observed
0
Poisson distribution - Number of accidents
4
Probability of a 500 year flood occuring in the next 100 years - comparison of approaches