I have supervised learning problem where targets are angles. If I would do simple regression then numbers 360 and 1 would be far away for my model, but actually they are close and predicting x and y coordinates doesn't feels right, since I am trying to predict just one number here. What is the proper way of doing such a problem? 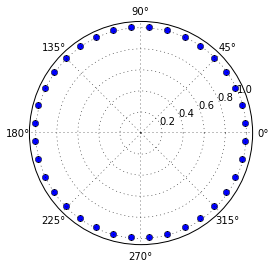 I suggest you to take a look at the book "Topics in circular statistics" of Jammalamadaka if you are interested in circular variable.

If you want a parallelism with the usual linear regression you can assume that $\theta_i \sim WN(\mu_i,\sigma^2)$, where $WN()$ indicates the wrapped normal distribution that is in some sense the Normal distribution on a circle. Then

Not the answer you're looking for? Browse other questions tagged regression circular-statistics or ask your own question.

6
regression with circular response variable
2
Modelling Periodic Features
30
Encoding Angle Data for Neural Network
6
Loss function (and encoding?) for angles
1
Is this an example of imbalanced data for regression?
0
Hierarchical circular-circular regression in R
6
Converting a circular outcome variable to a linear one
0
use GAMM models for full circular wind direction data