Estimating the time for completing a sequence of actions

In short: suppose I have observations for times taken to do some action. I want to estimate, how long will it take to complete a sequence of actions. The estimate should minimize the mean absolute error (L1 norm).

Details: I have observations for positive, non-identically distributed RV $x_i$, it can be assumed that RV are independent. I am interested in $y = \sum_{i=1}^n x_i$. For example, $x_i$ can be the time for action $i$, and $y$ the time for completing a sequence of actions. I would like to find an estimate $\hat{y}$ that would minimize the mean absolute error (L1 norm). So I need to estimate $\mathit{median}(y)$.

I estimate an empirical distribution of all observations (ignoring that the variables are non identically distributed), generate synthetic data from that distribution. On that data I learn $w = f(n)$ using some machine learning approach, e.g. ANN.

This gives a slight improvement over simply using $w=0$ or $w=1$ for all $n$, but not much, and not always. 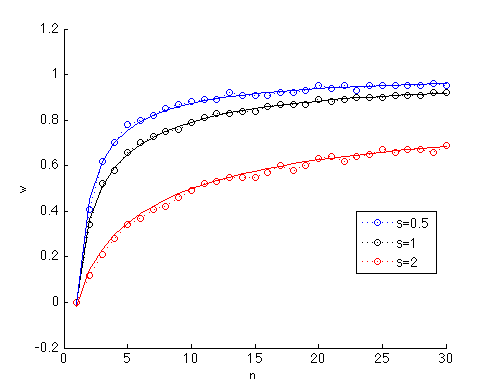 This is a hard problem, but I think you are going wrong early on. The median of the sum does not equal the sum of the medians for independent variables, even asymptotically. In your example you simulated from a distribution where the median < mean, but both are constant. Since the sum of means is asymptotically correct (central limit theorem), the sum of medians will be an underestimate.

In fact, the independence is a problem for you. If you could assume an underlying "skill" for each subject, so that they always perform in the same percentile of every task, then I think the sum of medians would equal the median of the sum. In practical applications the truth is probably somewhere in-between, so the sum of medians is not horrible, but statistically it is a bad estimate. It is biased (if $n>1$), not consistent (does not converge to the true value even for large $n$), and it is difficult to handle analytically.

For your actual problem, I doubt there is a general analytic solution without some assumptions about the underlying distributions. If you can approximate your distributions with analytic expression with a tractable formula for the sum of two independent (?) random variables (e.g. Gamma distributions with the same scale parameter), then you can develop explicit solutions.

You might also consider "learning" the speed of convergence of the sums of your distributions to the normal. You will have to make some assumptions about them: members of a scale or shift family, correlation, etc for the simulations. I think the individual medians are highly misleading, you could just try estimates of the form $w \cdot mean$, with $w \rightarrow 1$.

I'm not a statistician, so my answer might be a complete parody. Now, after I've warned you, I will make an attempt to answer. If I understand you correctly, it seems to me that you are talking about modeling stochastic processes. In that case, I think that estimating completion time for such processes can be done via survival analysis. The following example paper does just exactly that: http://www.ieor.berkeley.edu/~faridani/papers/csdm2011.pdf. Another paper, link to which follows, describes a somewhat different model and approach, but might be adapted and still applicable to your situation: http://webspn.hit.bme.hu/~arpi/publ/RACZ02h.pdf. Hope this helps.

Not the answer you're looking for? Browse other questions tagged machine-learning estimation median or ask your own question.

3
Estimating values of a sequence from observed differences
8
When to use sample median as an estimator for the median of a lognormal distribution?
8
What's the difference between estimating equations and method of moments estimators?
3
Convergence to zero of a sum involving the median
4
Minimizing the median absolute deviation or median absolute error
0
Statistics in kernel estimate
1
A way of median optimization (instead of mean) for skewed distribution in machine learning
5
Name of mean- or median-like values?
1
Consistency of the maximum likelihood estimator for the variance of a normal random variable when the parameter is perturbed with white noise