Is bootstrapping appropriate for this continuous data?

I'm doing a study with a sample size of 10,000 from a population of about 745,000. Each sample represents a "percentage similarity". The great majority of the samples are around 97%-98% but a few are between 60% and 90%, that is, the distribution is heavily negatively skewed. Around 0.6% of the results are 0%, but these will be treated separately from the sample.

What I am doing is resampling (with replacement) my 10,000 results and calculating a new mean. I do this a few thousand times and store each mean in an array. I then calculate the "mean of the means" and this is my statistical result. To work out the 99% CI, I choose the 0.5%-th value and the 99.5%-th value, and this produces a very tight range: 97.4% - 98.0%. Is this a valid result or am I doing something wrong?

Thanks in advance for any tips! 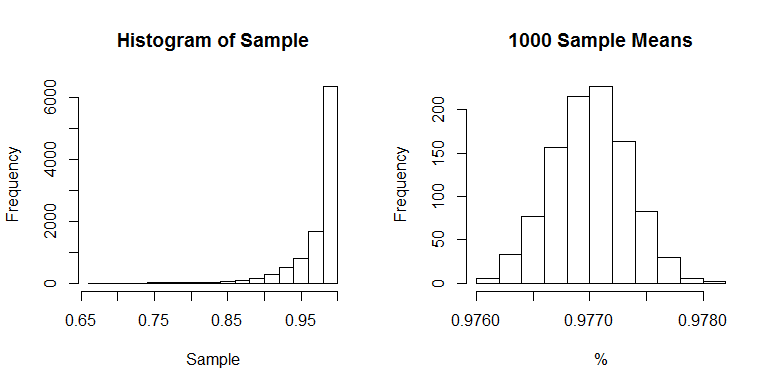 It looks very close to Normal, doesn't it?

Thus, although it appears you are bootstrapping correctly, bootstrapping is not needed: a symmetric $100 - \alpha\%$ confidence interval for the mean is obtained, as usual, by multiplying the standard error by an appropriate percentile of the standard Normal distribution (to wit, $Z_{1-\alpha/200}$) and moving that distance to either side of the mean. In your case, $Z_{1-\alpha/200} = 2.5758$, so the $99\%$ confidence interval is

A sufficient sample size can be found by inverting this relationship to solve for the sample size. Here it tells us that you need a sample size around

This is small enough that we might want to re-check the conclusion that the sampling distribution of the mean is Normal. I drew a sample of $272$ from my population and bootstrapped its mean (for $9999$ iterations): 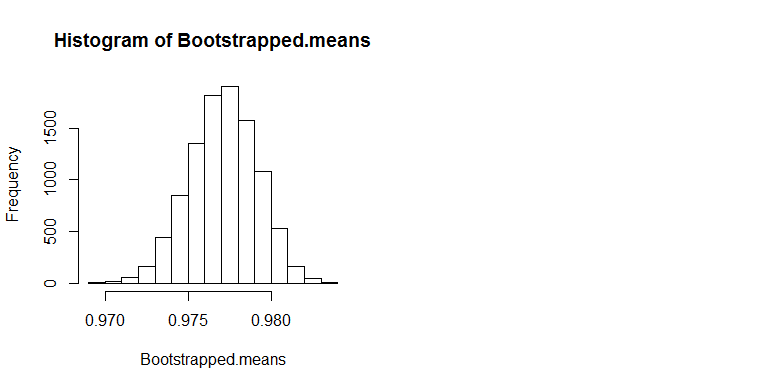 As these examples show, the absolute sample size determines the accuracy of estimates rather than the proportion of the population size. (An extreme but intuitive example is that a single drop of seawater can provide an accurate estimate of the concentration of salt in the ocean, even though that drop is such a tiny fraction of all the seawater.) For your stated purposes, obtaining a sample of $10000$ (which requires more than $36$ times as much work as a sample of $272$) is overkill.

R code to perform these analyses and plot these graphics follows. It samples from a population having a Beta distribution with a mean of $0.977$ and SD of $0.032$.

Not the answer you're looking for? Browse other questions tagged bootstrap sample-size resampling or ask your own question.