How does the inclusion of an intercept change the variability of the residual?

Now I am wondering what the effect of including/excluding an intercept in the first regression to obtain the variability of the residuals is? I'm asking because it seems that this has a strong effect on the pre-post results in my design.

As mentioned before it is sort of hard to justify not using an intercept unless there is strong knowledge that the linear regression line passes through the origin.

However, how fitting the model with and without the intercept affects the residuals is kind of case by case. For example, if the true model that generated the data did have an intercept far from the origin, you would definitely being doing a poor job of modelling the data and your residuals would be much larger for the model without intercept.

then fitting this model with an without intercept would result in the following model fits: 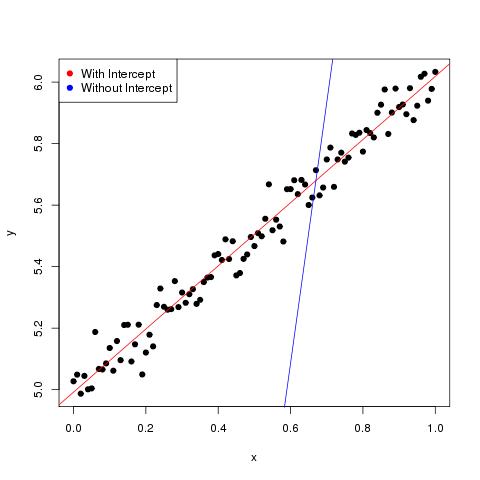 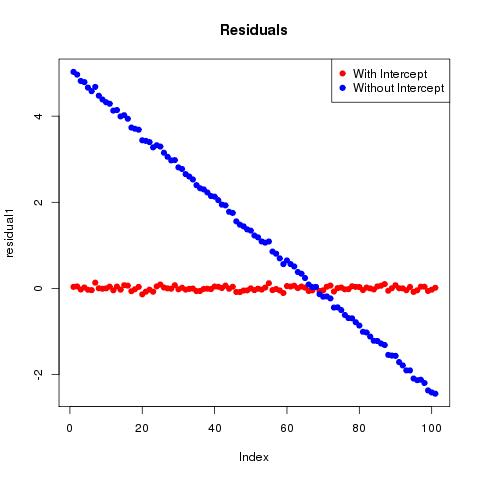 Now on the other hand, imagine that the true model that generated the data does not have an intercept (so the linear regression passes through zero). Let's say for example $$y=x$$ with a little bit of noise. Fitting a model with or without intercept should return very similar results (depending on how much data you have): 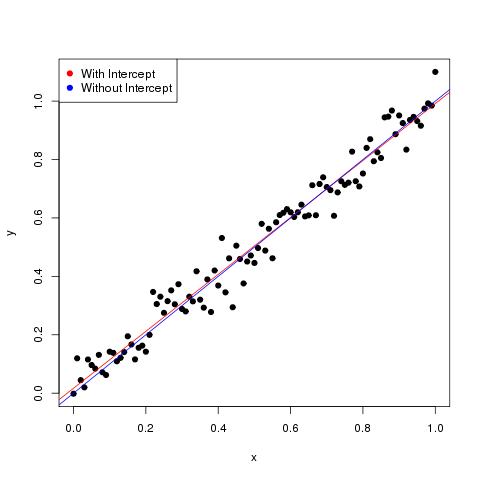 Resulting in residuals that are basically the same. 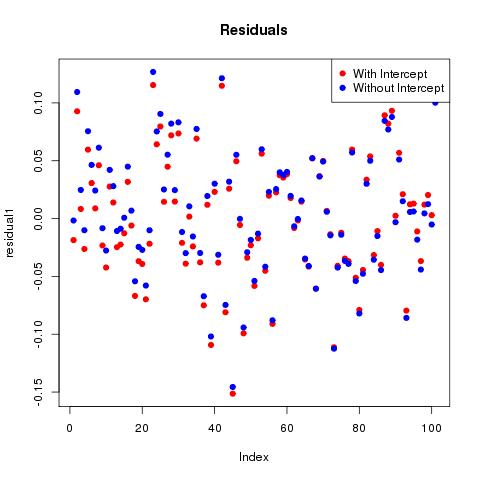 So at the end of the day what it really boils down to is the quality of the data and whether or not you really believe the true linear model passes through the origin (i.e. no intercept) or not. Unless there is strong evidence of the latter I would recommend including an intercept as a practical safeguard against my first example above.

My answer got too long to fit in the comments so I have put in a new one. Apologies for the delay I have been out of town.

There is a more fundamental question: have I captured the environment accurately? if not the before after makes no sense because I am missing out the variance as a result of not understanding the environment (I work in stochastic biology where in general we have very little idea of how the environment affects the growth rate).

Even when we ignore that issue a subtle problem remains: Suppose Y varies quadratically with the environment. The environment is strongly determining Y but a linear model is not capturing it. Hence, changes of variance as you are modeling them may not be the solution.

As a rule of thumb, you cannot infer causal results from regression models which is what you seem to be trying to do.

If you do insist on doing it in any case, you can proceed as follows : Calculate the residuals from the two fits call them $b_{1},b_{2}...$ and $f_{1},f_{2}...$. We know that the means of these residuals are 0. We are asking the question is the variance the same? There are standard methods in statistics to approach these sorts of problems for example see

That being said as @ kjetil mentions, you generally keep the intercept in unless you have a strong reason to believe otherwise.

I do not know the details of your model but the second regression you are proposing is kind of funky. Remember that in linear regression the base case assumption is that the variance is the same for all values of X. I am not sure I get what POST is but the estimate of M will be the same for all values of $X$ and hence when you test $b_{1} = 0$ in the second equation you are sure to get 0

Not the answer you're looking for? Browse other questions tagged regression stata residuals intercept or ask your own question.

4
Calculate standard errors: interaction between 2 factors, one of which has 3 levels in a regression model
2
Proving $\text{Var}{(\hat{y}_h)} = \sigma^2 \left(\frac{1}{n} + \frac{(x_h-\bar{x})^2}{S_{xx}}\right)$
4
Accounting for Violation of Parallel Trend Assumption in Diff-in-Diff with Propensity-Score Matching
13
ARIMA Intervention Transfer Function - How to Visualize the Effect
11
Residual Diagnostics and Homogeneity of variances in linear mixed model
8
Where is the explanatory effect of common variance among covariates accounted for in regression procedures?
1
Mixed Effects Model with Pre-Post Dependent Variable