I dealing with 3 covariates {x1, x2, x3} all three are discrete and contain missing data.

I am exploring the option of using multiple imputation. I plan on generating observations using joint multivariate dirichlet distribution. Am i heading in the right direction ? Please advise.

Below is my whole dataset 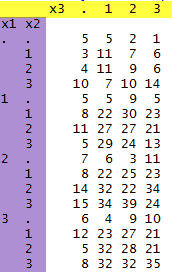 This approach requires having some complete data, preferable at every combination. With $1000$ observations and $27$ categories, this doesn't seem like a guarantee, but I think this is the best you can do without making any strong assumptions. There are other modelling strategies beyond this Dirichlet prior though; for example, one could use a log-linear model with some assumptions about higher order interactions to reduce the number of parameters.

Not the answer you're looking for? Browse other questions tagged r bayesian joint-distribution multiple-imputation dirichlet-distribution or ask your own question.