I wonder if a GARCH model with only "autoregressive" terms and no lagged innovations makes sense. I have never seen examples of GARCH($p$,0) in the literature. Should the model be discarded altogether?

From the above expression one can derive (by repeated substitution) that

for all $t$, if an infinite past of the process is assumed. In other words, GARCH(1,0) implies homoskedasticity and thus the "autoregressive" term, and indeed the whole model, becomes redundant.

Of course, when estimating models in practice, we do not have infinite past; but for long enough time series this approximation should be reasonably representative.

Nevertheless, my understanding of the way MLE GARCH programs work is they will set the initial GARCH variance equal to either the sample variance or the expected value (that you derive for this case). Without any ARCH terms, the sample variance version would converge to the long-term one (depending on the size of $\delta$). I don't think there would be any change for the expected variance version. So, I'm not sure if you could say it is homoskedastic no matter what (it depends on how you choose the initial variance), but it likely would converge quickly to the expected value for common values of $\delta$.

GARCH($p$,0) can generate the following patterns of the conditional variance $\sigma_t^2$: 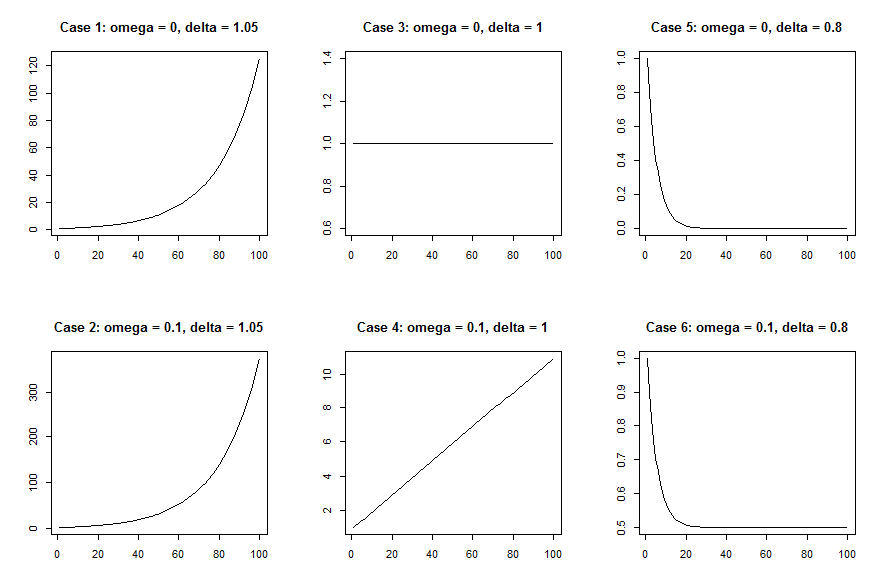 Whether any of the patterns makes sense depends on the applications.
Nevertheless, there seems to be nothing wrong with the model definition per se, except perhaps for case 3. where the conditional variance equation is redundant.

If GARCH(p, 0) is "redundant", then why did the authors of GARCH put together such a queer model statement? Apparently, the GARCH part is "redundant" only when both p and q are equal to zero. That's a common sense explanation.

The problem is you are confusing the conditional and unconditional variances. Any GARCH(p, q) process is a stationary process with a constant unconditional variance that can be computed similarly to how you got the limit for $ \sigma^2_t$. The value of that limit answers a question: if one selects $y_t$ at random, what is its variance going to be?

Conditional variance answers a question: if one knows the entire process history upto $(t-1)$, inclusive, then what is the variance of $y_t$ going to be? Apparently, given the relationship:

you will have a much better estimate for the variance of $y_t$ in the second case. On the other hand, if it were a “regular” ARMA(p,q) process, the answer would be exactly the same in both cases.

Not the answer you're looking for? Browse other questions tagged garch volatility-forecasting or ask your own question.