I am doing factor analysis to check the factorial validity of a 14-items scale with four subscales. Two items have low (less than 0.3) correlations with other items in the subscale to which they belong. However, they load considerably (greater than 0.32) on the factor (latent variable) to which they correspond. Under such condition, should the two variables be dropped from the scale on grounds of low correlations or be retained within the scale on grounds of the acceptable loadings?

Update: After going further through the analysis--removing one item on substantive ground and another item due to low loading (in the range of .2)--I found the correlation matrix depicted below.

However, as you see hereunder, the loading of each item on the factor to which it belongs is substantial and no cross-loading. 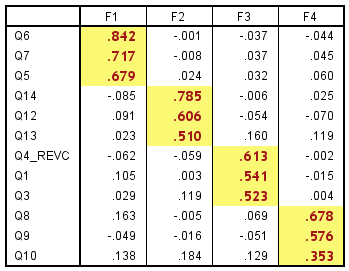 Given these results, how should I go about interpreting my subscales? May I be justified to consider the sub-scales as being suited to measure the underlying constructs/factors of interest?

Do these two correlate highly with each other? If you add another factor to the solution, do they form a separate factor?

If so, then they may be another factor (but with only two variables that relate to it) and this factor may relate to the factor you discuss in your post.

Try different numbers of factors and try oblique rotations as well as orthogonal ones in order to further explore what is going on.

In the end, though, I think the determination should be made based on which solution makes substantive sense.

Not the answer you're looking for? Browse other questions tagged factor-analysis or ask your own question.