What is the difference between convolutional neural networks, restricted Boltzmann machines, and auto-encoders?

Recently I have been reading about deep learning and I am confused about the terms (or say technologies). What is the difference between

Autoencoder is a simple 3-layer neural network where output units are directly connected back to input units. E.g. in a network like this: 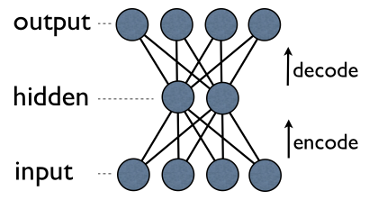 output[i] has edge back to input[i] for every i. Typically, number of hidden units is much less then number of visible (input/output) ones. As a result, when you pass data through such a network, it first compresses (encodes) input vector to "fit" in a smaller representation, and then tries to reconstruct (decode) it back. The task of training is to minimize an error or reconstruction, i.e. find the most efficient compact representation (encoding) for input data. 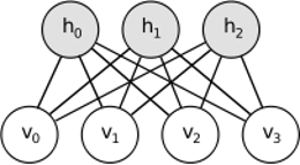 Intuition behind RBMs is that there are some visible random variables (e.g. film reviews from different users) and some hidden variables (like film genres or other internal features), and the task of training is to find out how these two sets of variables are actually connected to each other (more on this example may be found here).

Convolutional Neural Networks are somewhat similar to these two, but instead of learning single global weight matrix between two layers, they aim to find a set of locally connected neurons. CNNs are mostly used in image recognition. Their name comes from "convolution" operator or simply "filter". In short, filters are an easy way to perform complex operation by means of simple change of a convolution kernel. Apply Gaussian blur kernel and you'll get it smoothed. Apply Canny kernel and you'll see all edges. Apply Gabor kernel to get gradient features. 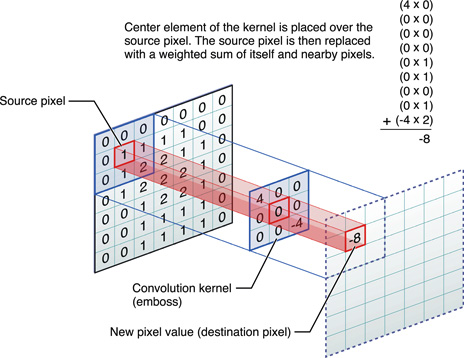 The goal of convolutional neural networks is not to use one of predefined kernels, but instead to learn data-specific kernels. The idea is the same as with autoencoders or RBMs - translate many low-level features (e.g. user reviews or image pixels) to the compressed high-level representation (e.g. film genres or edges) - but now weights are learned only from neurons that are spatially close to each other. 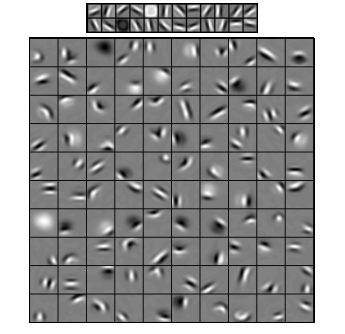 All three models have their use cases, pros and cons, but probably the most important properties are:

When we represent some object as a vector of $n$ elements, we say that this is a vector in $n$-dimensional space. Thus, dimensionality reduction refers to a process of refining data in such a way, that each data vector $x$ is translated into another vector $x'$ in an $m$-dimensional space (vector with $m$ elements), where $m < n$. Probably the most common way of doing this is PCA. Roughly speaking, PCA finds "internal axes" of a dataset (called "components") and sorts them by their importance. First $m$ most important components are then used as new basis. Each of these components may be thought of as a high-level feature, describing data vectors better than original axes.

Both - autoencoders and RBMs - do the same thing. Taking a vector in $n$-dimensional space they translate it into an $m$-dimensional one, trying to keep as much important information as possible and, at the same time, remove noise. If training of autoencoder/RBM was successful, each element of resulting vector (i.e. each hidden unit) represents something important about the object - shape of an eyebrow in an image, genre of a film, field of study in scientific article, etc. You take lots of noisy data as an input and produce much less data in a much more efficient representation.

So, if we already had PCA, why the hell did we come up with autoencoders and RBMs? It turns out that PCA only allows linear transformation of a data vectors. That is, having $m$ principal components $c_1..c_m$, you can represent only vectors $x=\sum_{i=1}^{m}w_ic_i$. This is pretty good already, but not always enough. No matter, how many times you will apply PCA to a data - relationship will always stay linear.

Autoencoders and RBMs, on other hand, are non-linear by the nature, and thus, they can learn more complicated relations between visible and hidden units. Moreover, they can be stacked, which makes them even more powerful. E.g. you train RBM with $n$ visible and $m$ hidden units, then you put another RBM with $m$ visible and $k$ hidden units on top of the first one and train it too, etc. And exactly the same way with autoencoders.

But you don't just add new layers. On each layer you try to learn best possible representation for a data from the previous one: 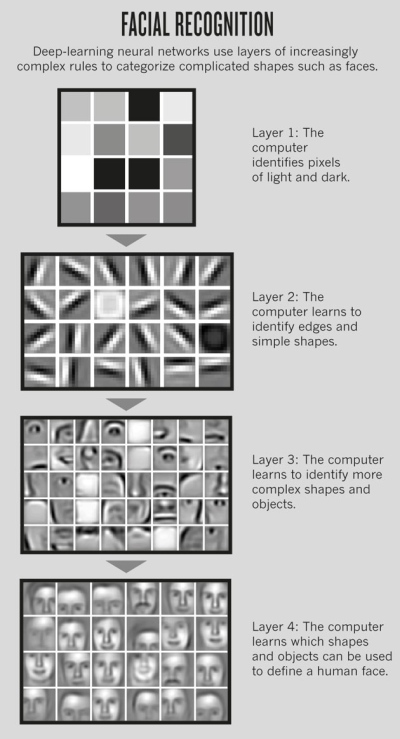 On the image above there's an example of such a deep network. We start with ordinary pixels, proceed with simple filters, then with face elements and finally end up with entire faces! This is the essence of deep learning.

Now note, that at this example we worked with image data and sequentially took larger and larger areas of spatially close pixels. Doesn't it sound similar? Yes, because it's an example of deep convolutional network. Be it based on autoencoders or RBMs, it uses convolution to stress importance of locality. That's why CNNs are somewhat distinct from autoencoders and RBMs.

None of models mentioned here work as classification algorithms per se. Instead, they are used for pretraining - learning transformations from low-level and hard-to-consume representation (like pixels) to a high-level one. Once deep (or maybe not that deep) network is pretrained, input vectors are transformed to a better representation and resulting vectors are finally passed to real classifier (such as SVM or logistic regression). In an image above it means that at the very bottom there's one more component that actually does classification.

All of these architectures can be interpreted as a neural network. The main difference between AutoEncoder and Convolutional Network is the level of network hardwiring. Convolutional Nets are pretty much hardwired. Convolution operation is pretty much local in image domain, meaning much more sparsity in the number of connections in neural network view. Pooling(subsampling) operation in image domain is also a hardwired set of neural connections in neural domain. Such topological constraints on network structure. Given such constraints, training of CNN learns best weights for this convolution operation (In practice there are multiple filters). CNNs are usually used for image and speech tasks where convolutional constraints are a good assumption.

In contrast, Autoencoders almost specify nothing about the topology of the network. They are much more general. The idea is to find good neural transformation to reconstruct the input. They are composed of encoder (projects the input to hidden layer) and decoder (reprojects hidden layer to output). The hidden layer learns a set of latent features or latent factors. Linear autoencoders span the same subspace with PCA. Given a dataset, they learn number of basis to explain the underlying pattern of the data.

RBMs are also a neural network. But interpretation of the network is totally different. RBMs interpret the network as not a feedforward, but a bipartite graph where the idea is to learn joint probability distribution of hidden and input variables. They are viewed as a graphical model. Remember that both AutoEncoder and CNN learns a deterministic function. RBMs, on the other hand, is generative model. It can generate samples from learned hidden representations. There are different algorithms to train RBMs. However, at the end of the day, after learning RBMs, you can use its network weights to interpret it as a feedforward network.

RBMs can be seen as some kind of probabilistic auto encoder. Actually, it has been shown that under certain conditions they become equivalent.

Nevertheless, it is much harder to show this equivalency than to just believe they are different beasts. Indeed, I find it hard to find a lot of similarities among the three, as soon as I start to look closely.

E.g. if you write down the functions implemented by an auto encoder, an RBM and a CNN, you get three completely different mathematical expressions.

I can't tell you much about RBMs, but autoencoders and CNNs are two different kinds of things. An autoencoder is a neural network that is trained in an unsupervised fashion. The goal of an autoencoder is to find a more compact representation of the data by learning an encoder, which transforms the data to their corresponding compact representation, and a decoder, which reconstructs the original data. The encoder part of autoencoders (and originally RBMs) have been used to learn good initial weights of a deeper architecture, but there are other applications. Essentially, an autoencoder learns a clustering of the data. In contrast, the term CNN refers to a type of neural network which uses the convolution operator (often the 2D convolution when it is used for image processing tasks) to extract features from the data. In image processing, filters, that are convoluted with images, are learned automatically to solve the task at hand, e.g. a classification task. Whether the training criterion is a regression/classification (supervised) or a reconstruction (unsupervised) is unrelated to idea of convolutions as an alternative to affine transformations. You can also have a CNN-autoencoder.

Not the answer you're looking for? Browse other questions tagged neural-networks deep-learning conv-neural-network autoencoders restricted-boltzmann-machine or ask your own question.