As part of reproducing a model I described partially in this question on Stack Overflow, I want to obtain a plot of a posterior distribution. The (spatial) model describes the selling price of some properties as a Bernoulli distribution depending on whether the property is expensive (1) or cheap (0). In equations:

where $y_{i}$ is the binary result 1 or 0, $p_{i}$ is the probability of being cheap or expensive, $w({\bf{s}})$ is a spatial random variable where $\bf{s}$ represents its position. All of this for each $i = \{1, ..., 70\}$ because there are 70 properties in the dataset. $\bf{\Sigma}$ is a covariance matrix based on the geographical position of the data points. If you're curious about this model, the dataset can be found here.

The plot I want to obtain is the following contour plot: 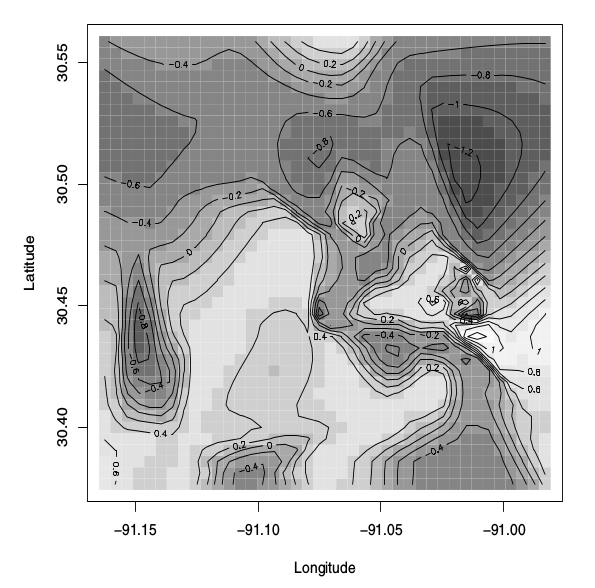 The figure is described as "Image plot of the posterior median surface of the latent process $w({\bf{s}})$, binary spatial model". The book also says this:

Figure 5.8 shows the image plot with overlaid contour lines for the posterior mean surface of the latent $w({\bf{s}})$ process.

However, there are only 70 pairs of points in the dataset. I suppose that, in order to produce a contour plot, I need to estimate $w({\bf{s}})$ in 70*70 points. So, my question is: How do I produce this posterior median surface? So far I have samples of posterior distributions for all the parameters involved (using PyMC) and I know that I can predict $y^*$ at a new point using the posterior predictive distribution. However, I don't know how to predict values $w({\bf{s}})$ at a new point $s^*$. Maybe I'm wrong and the plot wasn't constructed by prediction but by interpolation.

First, this is the median of the posterior distribution of $w({\bf{s}})$ at each location where there is a property. This is based on the MCMC trace for $w$. 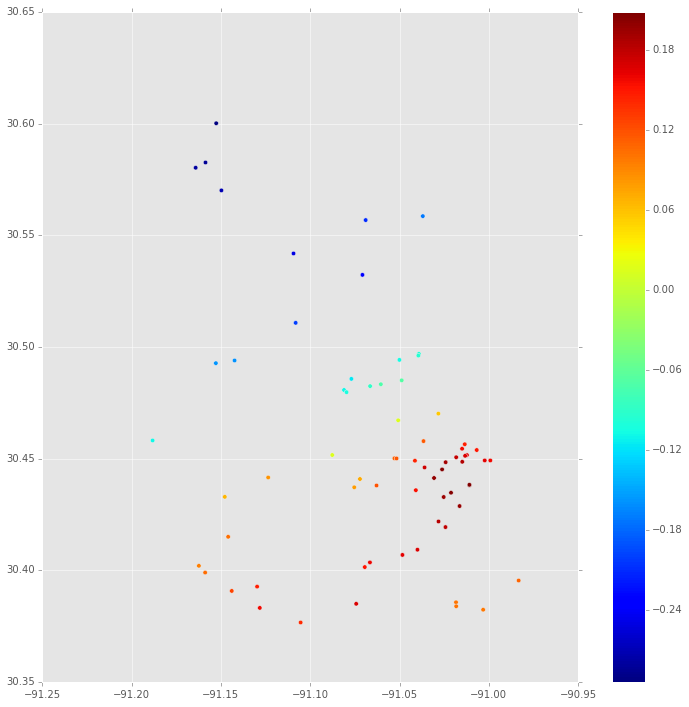 And this is the interpolation (with a contour plot) using a radial basis function: 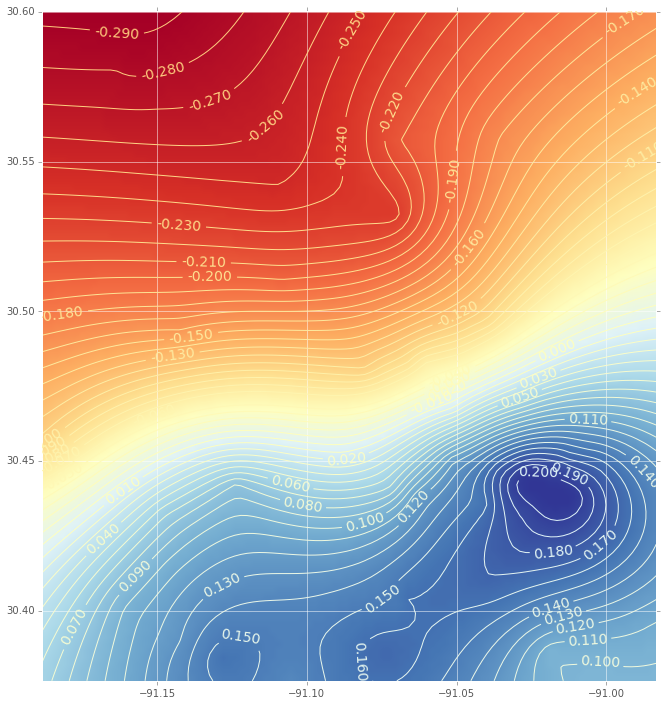 (If you're interested in the code, let me know)

As you can see, there are significant differences in the plots. A couple of questions:

It is very likely that the author used a Gaussian process to produce the interpolation. I think that is true because an exercise in the book describes a very similar problem to this one and requires a plot based on a Gaussian process.

I tried it and I think the resulting plot shares features with the posterior median surface of the original question. This is the median of the posterior distribution of $w(s)$ as above (it is slightly different because I ran another MCMC simulation): 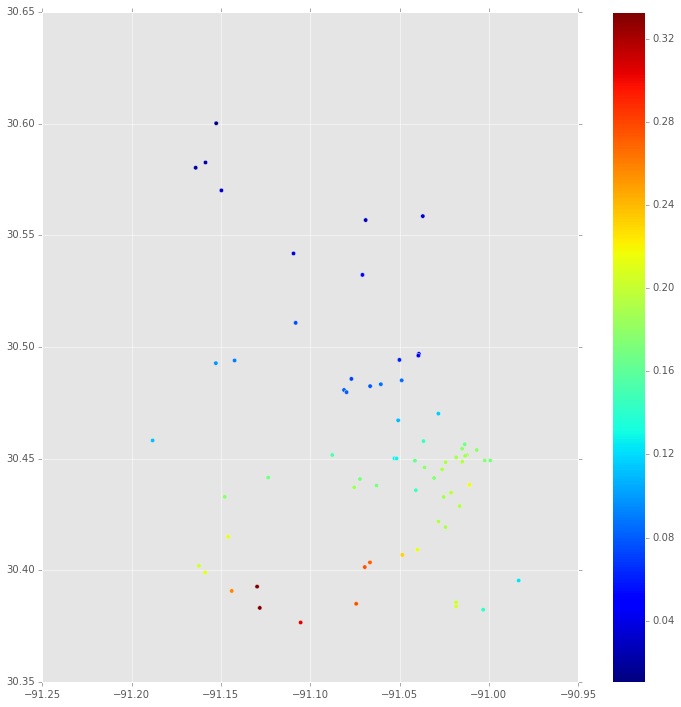 And this is the interpolation based on a Gaussian process: 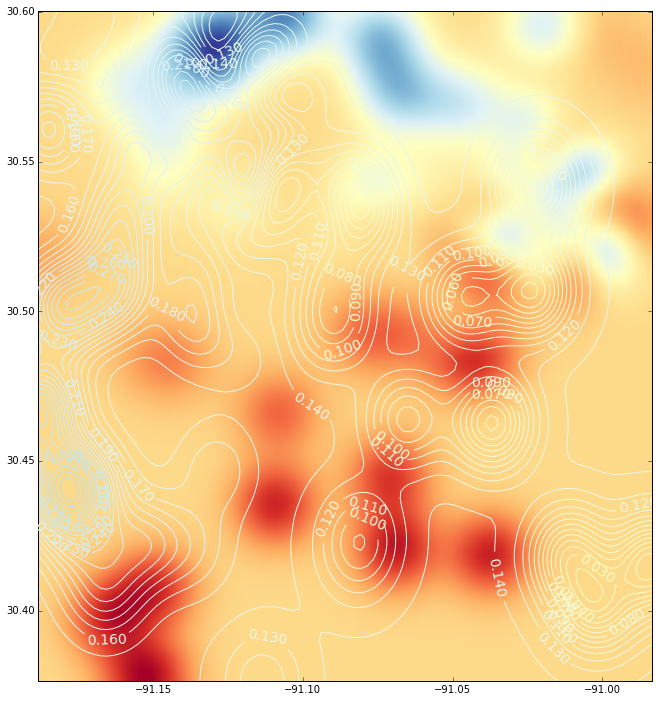 As you can see, the method of interpolation makes a huge difference.

Not the answer you're looking for? Browse other questions tagged prediction spatial posterior hierarchical-bayesian pymc or ask your own question.

6
How to test the effect of variable on spatial distribution of points in R
4
Can likelihood be changed when the prior changes?
8
Bayesian regression with singular $(X'X)$ - Is the posterior well-defined?
4
Choice of a model for Bayesian Change Point Detection
1
Distribution of posterior mean from different datasets
4
How to predict using Spatial temporal hierarchical bayesian models
3
Are analytically tractable posterior distributions exclusively the result of a conjugate relationship in Bayesian hierarchical models?
1
Is there any “maximizing” in a Bayesian model?