I'm looking for a rule that applies the selection of optimal equal-bin widths on two-dimensional histograms.

Is there such a rule? Perhaps one of the well-known rules for 1D histograms can be easily adapted, if so, could you give some minimal details on how to do so?

My advice would generally be that it's even more critical than in 1-D to smooth where possible i.e. to do something like kernel density estimation (or some other such method, like log-spline estimation), which tends to be substantially more efficient than using histograms. As whuber points out, it's quite possible to be fooled by the appearance of a histogram, especially with few bins and small to moderate sample sizes.

If you're trying to optimize mean integrated squared error (MISE), say, there are rules that apply in higher dimensions (the number of bins depends on the number of observations, the variance, the dimension, and the "shape"), for both kernel density estimation and histograms.

[Indeed many of the issues for one are also issues for the other, so some of the information in this wikipedia article will be relevant.]

This dependence on shape seems to imply that to choose optimally, you already need to know what you're plotting. However, if you're prepared to make some reasonable assumptions, you can use those (so for example, some people might say "approximately Gaussian"), or alternatively, you can use some form of "plug-in" estimator of the appropriate functional.

Wand, 1997$^{[1]}$ covers the 1-D case. If you're able to get that article, take a look as much of what's there is also relevant to the situation in higher dimensions (in so far as the kinds of analysis that are done). (It exists in working paper form on the internet if you don't have access to the journal.)

Analysis in higher dimensions is somewhat more complicated (in pretty much the same way it proceeds from 1-D to r-dimensions for kernel density estimation), but there's a term in the dimension that comes into the power of n.

In the case of independent normal variables, the approximate rule is $h_k^*\approx 3.5\sigma_k n^{−1/(2+d)}$, where $h_k$ is the binwidth in dimension $k$, the $*$ indicates the asymptotically optimal value, and $\sigma_k$ is the population standard deviation in dimension $k$.

For bivariate normal with correlation $\rho$, the binwidth is

When the distribution is skewed, or heavy tailed, or multimodal, generally much smaller binwidths result; consequently the normal results would often be at best upper bounds on bindwith.

Of course, it's entirely possible you're not interested in mean integrated squared error, but in some other criterion.

Given you have a fixed number $N$ of data (ie. you have equal number of reading on both dimensions) you could immediately use:

To find the common number of bins $M$ across each dimension.

On the hand, you might want to try something more robust like the Freedman–Diaconis rule which essentially defines the bandwidth $h$ as equal to:

where IQR is the interquartile range of your data $x$. You then calculate the number of bins $M$ along each dimension as being equal to:

You do this across both dimensions of your data $x$; this gives you two, possibly different, numbers of bins that "should" be used across each dimension. You naively take the larger one so you do not "lose" information.

Yet, a fourth option would be to try to treat your sample as natively two-dimensional, calculate the norm for each of the sample points and then perform the Freedman–Diaconis rule on the sample's norms. ie.:

OK, here is some code and a plot for the procedures I describe: 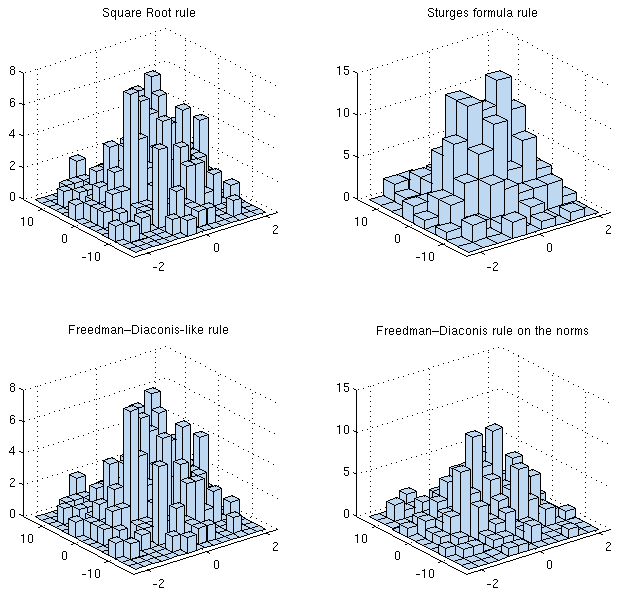 As others have noted smoothing is almost certainly more appropriate for this case (ie. getting a KDE). I hope thought this gives you an idea about what I described in my comment regarding the direct generalization (with all the problems it might entail) of 1-D sample rules to 2-D sample rules. Notably, most procedure do assume some degree of "normality" in the sample. If you have a sample that clearly is not normally distributed (eg. it is leptokurtotic) these procedure (even in 1-D) would fail quite badly.

Not the answer you're looking for? Browse other questions tagged optimization histogram or ask your own question.

114
Assessing approximate distribution of data based on a histogram

14
Best way to put two histograms on same scale?
2
Normalize histogram with different bin width?
1
Is there a general/golden rule for appropriate binning in a histogram?
3
How to find the threshold between two histograms at fixed false positive rate?
3
good number of bins for logarithmic bin width