What distribution family would best fit this graph?

Sorry if this type of question is not kosher. I'm new around here, so please forgive me.

Anyway, I have a dataset that describes the probability that users will like certain articles from my corpus (with 5 articles chosen randomly and graphed below. Along the x axis are individual users, and along the y-axis their score. The users are sorted by score.)

I'm looking to fit a distribution to each line, but am unsure of which one to choose that would likely best these lines. I was thinking of using an exponential distribution? But there's a lot of information that exponential probably would not capture here. Does anyone have a good idea?

EDIT: I will update my title to include the name of a reasonable distribution so that this question will be more searchable and others would possibly learn from it in the future. 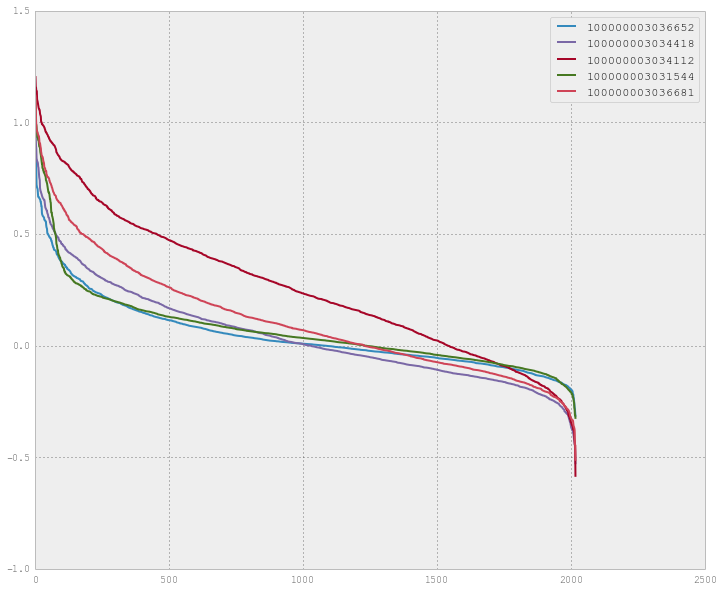 To many statisticians, information like this would usually be thought of as an empirical CDF: 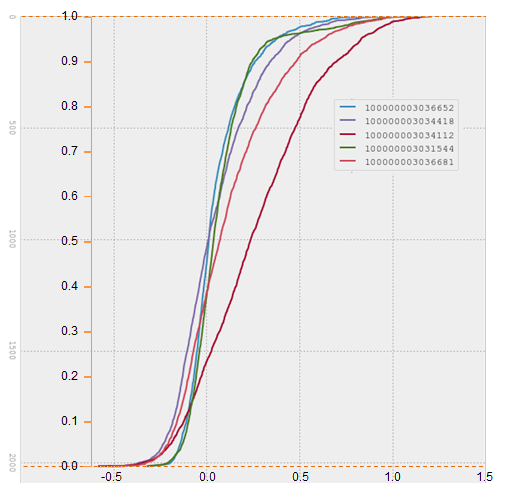 with the scores on the x-axis, and the proportion of people scoring it less than or equal to a given x-value on the y-axis (that is, your x-axis ranks become scaled to proportions of people scoring no more than the person with that rank, and then becomes the new y-axis).

But it's sometimes difficult to identify good approximating distributions from the ECDF; it might be easier to look initially at some other displays (histograms with plenty of bins, kernel density estimates, Q-Q plots or other distributional plots.

You don't say what the range of possible scores is, but I presume they're bounded. If so, a scaled beta distribution might be a reasonable starting model: 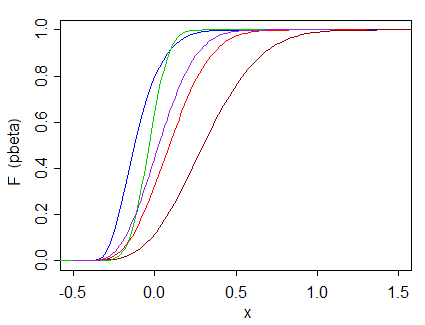 As you see, with appropriate choices for the 4 parameters (I didn't try to fit these, just tried some values roughly in the right region), they can look quite similar to at least 4 of the 5 distributions you have there. However, they're probably not suitable in general. Mixture distributions might get you further along.

On the other hand you have a lot of data, so the empirical distribution probably has all you need to answer all kinds of questions about the data.

Not the answer you're looking for? Browse other questions tagged distributions curve-fitting or ask your own question.

1
What regression formula would best fit this curve?
1
Scores and normal distributions
2
What is this distribution? Inverted S / cursive N
11
What is the distribution of sample correlation coefficients between two uncorrelated normal variables?
2
Choosing Analytic Functions to Fit to Data
1
Estimating user percentile given avg, min, max for multiple tests