I want to calculate incidence rates to present along hazard ratio's in order to present both relative and absolute measures of risk. I saw in other studies that such incidence rates can be calculated using poisson models with follow-up time in the model as an offset. So I tried that in R as follows :

I would expect that the incidence rate ratio's are similar to the hazard ratio's from the Cox PH model with the same terms, but somehow they differ. Am I using the correct approach to calculate incidence rates?

Any help would be greatly appreciated!

As far as I can see there's nothing wrong with your code or calculations. You could skip a few lines of code, though, by getting the incidence rate ratios by ${\tt exp(coef(mod))}$. The two models make different assumptions, and this potentially leads to different results.

Poisson regression assumes constant hazards. The Cox model only assumes that the hazards are proportional. If the assumption of constant hazards is fulfilled this question

Does Cox Regression have an underlying Poisson distribution?

explains the connection between Cox and Poisson regression.

We can use simulation to study two situations: constant hazards and non-constant (but proportional) hazards. First let's simulate data from a population with a constant hazard. The hazard ratio has the form

where $\beta$ is a vector of parameters, $x$ is a vector of covariates and $\lambda_0$ is some fixed positive number. Thus, the constant hazard assumption of the Poisson regression is fulfilled. Now we simulate from this model by using the fact (found in many books, e.g. Modeling Survival Data by Therneau, p.13) that the distribution function, $F$, of the survival time with $\lambda$ as hazard can be found as

With this we can also find the inverse of $F$, $F^{-1}$. With this function we simulate survival times with the correct hazard by drawing variables that are uniform on $(0,1)$ and transforming them using $F^{-1}$. Let's do it.

For the Cox model the averages of the parameter estimates are

and for the Poisson model

For both models, we see that this is close to the true values, remembering that the difference between men and women was -0.04, for instance, and it's estimated to be -0.038 for both models. We can now do the same with the non-constant hazard function

We now simulate as before.

For the Cox model we now get

and for the Poisson model

In this simulation, the averages of the Poisson model is clearly further from the true values than those of the Cox model. This is not surprising as we have violated the assumption of constant hazards.

When the hazard is constant, the survivor function, $S$, is of the form

for some positive $\alpha$ dependent on the specific subject, thus $S$ is convex. If we use the Kaplan-Meier estimator to get an estimate of $S$ for the original data, we see the following. 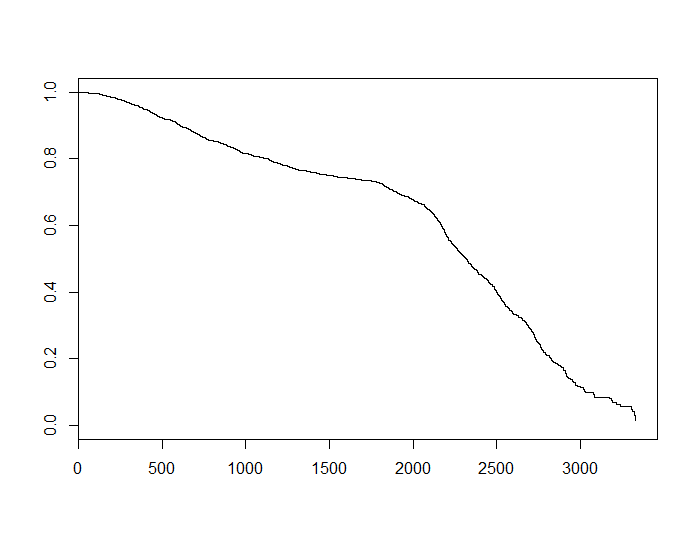 This function looks concave. This doesn't prove anything, but it could be a hint that the assumption of constant hazards is not fulfilled for this data set, which in turn could explain the discrepancies between the two models.

A final remark on data, as far as I know ${\tt colon}$ holds data on both time to recurrence of cancer and time to death (there's two observations for each value of ${\tt id}$). In the above, we've been modeling it like it was just the same thing. That's probably not a good idea.

Not the answer you're looking for? Browse other questions tagged r survival cox-model poisson-regression incidence-rate-ratio or ask your own question.

35
Does Cox Regression have an underlying Poisson distribution?
2
Calculation of the Confidence Interval for Incidence Rate Ratio using Exact Approach