I have a very rough understanding of the Dirichlet distribution and already seen some visualizations of its pdf over the 2-simplex, i.e., $\alpha$ is a 3D vector. However, I still do not understand the following statements that I have been frequently encountering with

I would appreciate if someone could explain what these two statements mean, like to a non-statistian (a dummy).

The binomial distribution describes the number of "successes" $y$ one expects to observe in a number of trials $n$. The binomial model has several key properties:

This is all well and good when all of our data are subject to some kind of rigorous controls, so that we know that across all of our observations, the $\theta$ for each "batch" of trials is the same. But more realistically, we have reason to believe that $\theta$ for trial $y_i$ is different than for trial $y_j$. One way to accomplish this is to treat each $\theta$ as if it were drawn separately from a beta distribution. The beta distribution has several useful properties

One method to draw values from a beta-binomial model is the following set of steps:

Drawing values from a multinomial distribution with a Dirichlet distribution over the probabilities of outcomes is accomplished in a very similar way:

I would appreciate if someone could explain what these two statements mean, like to a non-statistian (a dummy).

Let me try to do it by avoiding complex terminology.

First, you should understand what a simplex is. This answer explains it graphically: https://stats.stackexchange.com/a/296779/172825

To recap, every point in that simplex-triangle has a very nice property - it's in fact a particular multinomial distribution. Why? If you look at any point, its "vector" sums up to one and all "items" are between 0 and 1.

I tried to naively visualize Dirichlet distribution in the following figure. 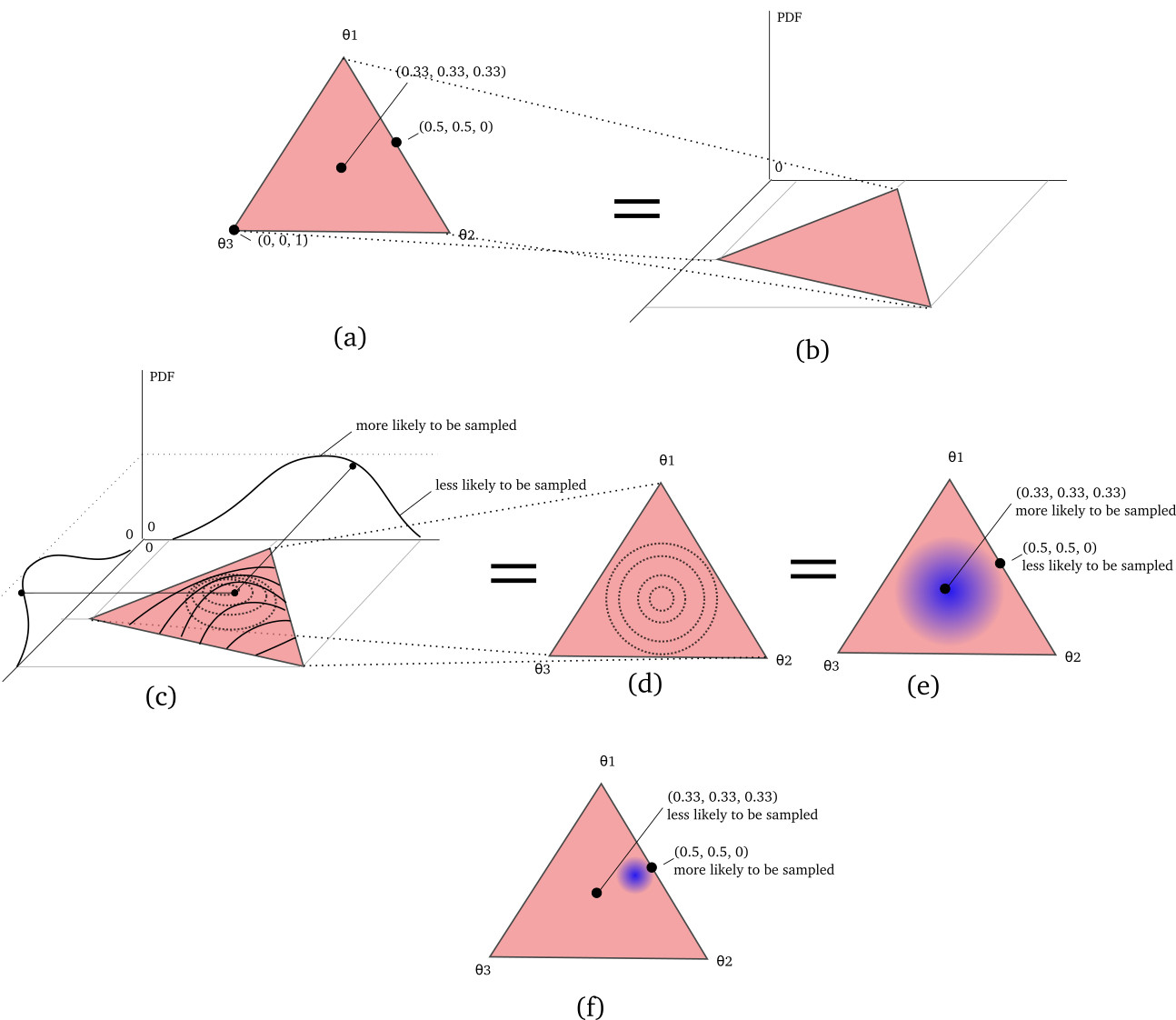 (a) shows a 3-simplex (as explained in the linked question). There are 3 example points shown with their "coordinates" so you can see that each of them is a multinomial distribution.

(c) is one particular example of Dirichlet distribution (I guess the parameters might be $\alpha = (2, 2, 2)$, roughly) - a kind of "mountain" in the middle of the triangle (sorry, I can't really sketch 3-D mountains easily). But you get the gist - the higher on that mountain, the higher the PDF value, thus the higher the chances a random sample will end-up here.

(d) just shows the "mountain" from the top as a contour-line plot; in reality the circles are not actual circles but that's a detail (e) is the same thing but using some kind of heat map (so the darker the blue is, the higher probability); such heat maps are shown in some literature on Dirichlet distribution

I'm not a statistician so I hope it's a correct explanation.

Not the answer you're looking for? Browse other questions tagged multinomial-distribution dirichlet-distribution or ask your own question.