Why $Y$ should be transformed before the predictors?

Both answers in these threads, one and two claim that $Y$ should be transformed before applying any other transformation to the predictors. Indeed Weisberg chapter on transformations focus more on DV than predictors, and so does the R car package powerTransform() manual page.

However, we know that normality of the DV distribution is not a requirement in OLS to estimate BLUE coefficients and, even when the residuals are not strictly normally distributed, OLS is still a reasonable estimator.

So why the emphasis on transforming $Y$? There are a couple of reasons I think it's actually preferable not to transform $Y$: first it makes the IVs relationship harder to read and second, in prediction, it requires a back-transform from the estimated value to the original $Y$ scale. Depending what you're doing this can be an issue.

Transforming X doesn't impact the shape of the conditional distribution, nor heteroskedasticity, so transforming X really only serves to deal with nonlinear relationships. (If you're fitting additive models it might serve to help with eliminating interaction, but even that's often best left to transforming Y)

An example where transforming only X makes sense: 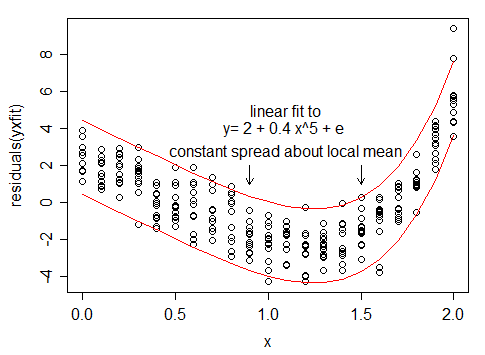 Consider, for example, a model where conditional variance is proportional to mean:

An example where transforming only X can't solve the problems: 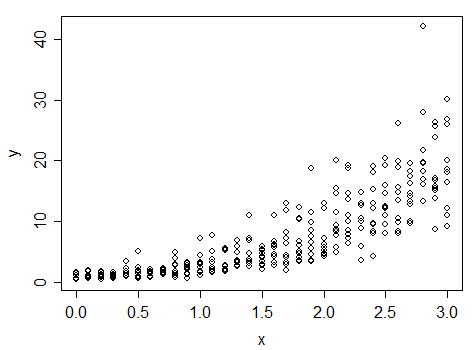 Moving values on the x-axis won't change the fact that the spread is greater for values on the right than values on the left. If you want to fix this changing variance by transformation, you have to squish down high Y-values and stretch out low Y-values.

Now, if you're considering transforming Y, that will change the shape of the relationship between response and predictors ... so you'll often expect to transform X as well if you want a linear model (if it was linear before transforming, it won't be afterward). Sometimes (as in the second plot above), a Y=transformation will make the relationship more linear at the same time - but it's not always the case.

If you're transforming both X and Y, you want to do Y first, because of that change in the shape of the relationship between Y and X - usually you need to see what relationships are like after you transform. Subsequent transformation of X will then aim to obtain linearity of relationship.

So in general, if you're transforming at all, you often need to transform Y, and if you're doing that, you nearly always want to do it first.

Transforming Y initially is an anachronistic approach to data analysis. Our great-great-great grandfathers did that so why shouldn't we? Lots of reasons and your post reflecting that Gaussian assumptions are solely based on the errors from a model NOT the Y series is dead-on.

55
Box-Cox like transformation for independent variables?
48
Regression when the OLS residuals are not normally distributed
26
Transforming variables for multiple regression in R
0
How to apply transformations to the predictors of a GLM?