In D&D players roll a 20 sided die trying to beat a set number to determine if an attack hits the target. Players often can add modifiers to this roll to help the odds in reaching this target number. If the target number (enemy armor level) is passed by the attack roll, damage is done to the target which requires a different roll depending on the power of the attack. If the armor level is matched for that attack roll, damage is calculated like normal (rolling dice, adding modifiers) and then halved, rounding down to the nearest integer.

One of my spells allows me to do three attacks at once on one creature, and on a hit deals 2 6-sided dice +2 damage.

It so happened I used this spell on my "Ally" and I'm trying to figure out what my chances of actually killing him were.

I roll a 1d20 (1 20-sided die) and add +4 to the roll and if that result is greater than or equal to 16 (my 'Allies' Armor level), I roll damage which is 2d6+2 (halfing then rounding down the damage if the attack equaled Armor level). That damage result is then subtracted from my 'Allies' starting Health which is 20.

I repeat this 2 more times, adding damage on each hit. If his health reduces to 0 then he is dead. If his health is 1 or more by the end of this attack he lives and gets to attack me.

I want to know, statistically what percentage of time will my Ally be reduced to 0 health after doing this spell?

What you really want to know is how to do this calculation quickly--preferably in your head--during game play. To that end, consider using Normal approximations to the distributions.

(Careful consideration of errors of approximation suggested, when I first carried this out and did not know the answer exactly, that this number was likely within $2\%$ of the correct value. In fact it is astonishingly close to the exact answer, which is around $16.9997\%$, but that closeness is purely accidental.)

These calculations are relatively simple and easily carried out in a short amount of time. This approach really comes to the fore when you just want to know whether the chances of something are small, medium, or large, because then you can make approximations that greatly simplify the arithmetic.

Normal approximations come to the fore when many activities are independently conducted and their results are added up--exactly as in this situation. Because the restriction to nonnegative health (which is not any kind of a summation operation) is a nuisance, ignore it and compute the chance that the opponent's health will decline to zero or less.

To verify this result (which was obtained before many of the other answers appeared), I wrote some R code to carry out such calculations in very general ways. Because they can involve nonlinear operations, such as comparisons and truncation, they do not capitalize on the efficiency of convolutions, but just do the work with brute force (using outer products). The efficiency is more than adequate for smallish distributions (having only a few hundred possible outcomes, more or less). I found it more important for the code to be expressive so that we, its users, could have some confidence that it correctly carries out what we want. Here for your consideration is the full set of calculations to solve this (somewhat complex) problem:

Of course, the data for this question had to be specified beforehand:

This code reveals that the calculations are lurking in a class I have named die. This class maintains information about outcomes ("value") and their chances ("prob"). The class needs some basic support for creating dice and displaying their values:

This is straightforward stuff, quickly written. The only subtlety is die.normalize, which adds the probabilities associated with values appearing more than once in the data structure, keeping the encoding as economical as possible.

The heart of the code is the overloading of arithmetic operations. I implemented only those needed for this calculation, but did so in a way that is easy to extend, as should be evident by all the one-line definitions. The conditional function (a variant of switch) is especially useful.

(If one wanted to be efficient, which might be useful when working with large distributions, rep.die, +.die, and -.die could be specially rewritten to use convolutions. This is unlikely to be helpful in most applications, though, because the other operations would still need brute-force calculation.)

To enable study of the properties of distributions, here are some statistical summaries:

As an example of their use, here is the health distribution for three damage rolls (the right hand plot in the first figure). The calculation of the total damage distribution is performed by x.3 <- health - rep(damage, 3) (pretty simple, right?) and the Normal approximation is computed via pnorm(x, mean.die(x.3), sd.die(x.3)).

All this ought to port easily to C++.

So if you roll 12 you exactly equal his armour class, and if you roll higher, you beat it.

So the unconditional distribution of per-attack damage is:

The convolution of damage from three such attacks is: 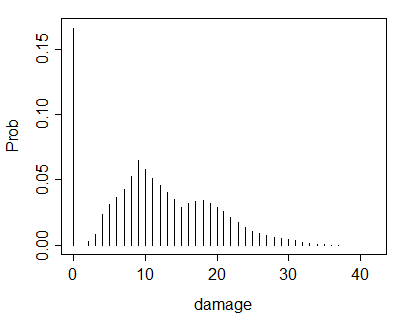 That is, the desired probability is essentially 17%.

(Interestingly, this is about the same chance as the chance of doing no damage at all.)

Average damage over three attacks is 11.44, median damage is 11.

The unconditional distribution of per-attack damage is:

The convolution for three attacks is: 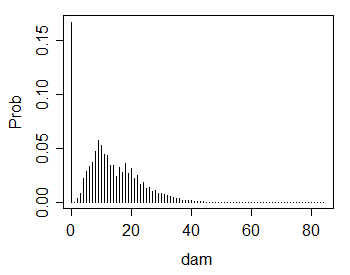 One way to get at this fairly simply is just through simulation - you won't get the exact percentage to the second decimal, but you can nail it down very closely. I've input some R code below that will simulate the rolls you're making and spit out the probability that your ally dies.

Suppose you beat his AC, then the distribution of 2d6+2 can be broken down to

You then have to adjust those probalities for the fact that you have an 8/20 chance of it happening:

If you hit for half, then you have to again multiply by 1/20

So now you have several ways to get 4,5,6,7 dmg, since this is an OR relationship (4 OR 5 OR 6 OR 7) you sum up the probabilities of those things happening:

Coming with a general formula is also possible, but it will be big.

Not the answer you're looking for? Browse other questions tagged probability games dice percentage or ask your own question.

24
How to easily determine the results distribution for multiple dice?
14
Probability that number of heads exceeds sum of die rolls
17
What is the distribution for various polyhedral dice all rolled at once?
3
Proof of Algebraic Formula for the Sum of Two-Dice Toss as a Convolution
4
roll dice 400 times, what is the probability that the total number of dots is at least 1350?
2
Rapid calculation for rolling two fair dice with different numbers of faces to get a sum over X
1
How can I show if there is a bias in judging?
2
Probability that sum of x dice greater than sum of y dice
1
Possibilities for rolling two dice: one is six-sided and the other one is four-sided