Comparing two datasets (of the same physical quantity) - what do I learn from this graph?

I'm having a hard time understanding what the authors of this paper (pdf) want to tell me with this graph (Fig. 2,3 (shown below) and 4, right): 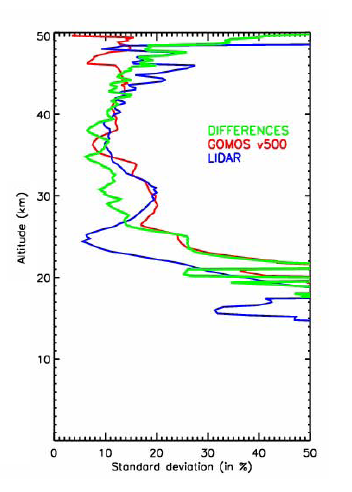 Note: contrary to convention, the measured quantity is plotted on the x-axis, not y-axis.

The problem at hand is as following: Two instruments measure the same physical quantity (in this case vertical distribution of ozone in the atmosphere). Their corresponding (instrument characterized) standard deviations (averaged over if I understand correctly) are displayed in red and blue. The difference between the two datasets is computed and the standard deviation of the difference data set is plotted in green.

What does this graph mean? Is this a way to say that the two datasets are in agreement? If yes, on what basis?

What would other extremes mean?

Maybe an example would help me to understand this better. Thanks

This appears to be an unconventional way to report correlation (or lack thereof). It focuses more on the variability of the measurements (across the earth at each fixed altitude) than on the correlation among them. As such the graphic may be of physical interest but it's an obscure way (at best) of comparing two measurement systems.

At each vertical position (an estimated altitude based on a pressure reading) the plots summarize between 3 and 18 pairs of data obtained over fixed stations on the earth's surface. The summaries consist of sample standard deviations normalized by the LIDAR readings (the reference measurement).

Consequently we can recover the correlation from the covariances:

These are, of course, estimates of $\rho$, subject to sampling uncertainty.

We can now qualitatively identify several portions of the plot:

Good questions. I scanned over the paper and have a couple of general thoughts...

First, with respect to

Note: contrary to convention, the measured quantity is plotted on the x-axis, not y-axis.

I like the unconventional orientation in this setting: with the Y-axis being altitude it lets me easily visualize that as I go higher into the atmosphere the new GOMOS instrument has less variable measurements of the same quantity as the traditional LIDAR method (and vice versa). This could be helpful in choosing instrumentation depending on where my particular data collection will take place, or may make me struggle with the idea of using two instruments (and their costs) to improve data quality.

Second, the left-most plots in Figures 2 and 3 visually show that the measurements are "very close", and the authors do call out the bias/variability differences with respect to altitude (which the plot you posted helps convey).

Finally, about the extremes, I think your "I think" statements imply that the two measurements are both valid, but it may be the case that at certain altitudes the bias and variability associated with a particular method means it should be abandoned in lieu of the other.

As for the statistical assessment of agreement, like you, I want to digest whuber's response.

Not the answer you're looking for? Browse other questions tagged dataset standard-deviation standard-error error-propagation measurement-error or ask your own question.