WLLN: can expectation exist but be infinite?

I don't understand why we have exists and is finite. Could you give me an example when the expectation exists but is infinite?

The Lebesgue integral is constructed in a sequence of steps whereby its domain of application is broadened to encompass an ever wider variety of random variables. The first steps ultimately define the integral for variables with non-negative values: the complications of integrating functions which might oscillate arbitrarily between negative and positive values are thereby avoided. To extend the integral to variables with negative values, decompose them into their positive and negative parts:

each of which involves a non-negative random variable and therefore the meaning of its integral has already been defined.

Although the first integral diverges, the second obviously is finite, so we could consider this expectation to be infinite. This example answers the question, but a full appreciation requires analysis of a distribution that looks infinite but actually cannot be defined at all. The standard example is the Cauchy distribution (also known as the Student t with one degree of freedom).

For a Cauchy-distributed variable the PDF is $(1/\pi)/(1+x^2)$ everywhere. Splitting the expectation into its positive and negative parts yields

Now both sides diverge. Since an expression like "$\infty - \infty$" is nonsensical, we have no choice but to declare this expectation undefined. One way to convince yourself of this is to consider the various ways in which the integral might be calculated: they concern how the limits of $\pm \infty$ are approached. Pick any nonnegative real value $\alpha$. As a mechanism to control the relative rates at which those limits increase, define

As $n$ grows large without bound, so does $f(n)$. Therefore, if this integral indeed had a well-defined value, it would be valid to compute it as

because both the limits, $-n$ and $f(n)$, are expanding to encompass the entire Real line. 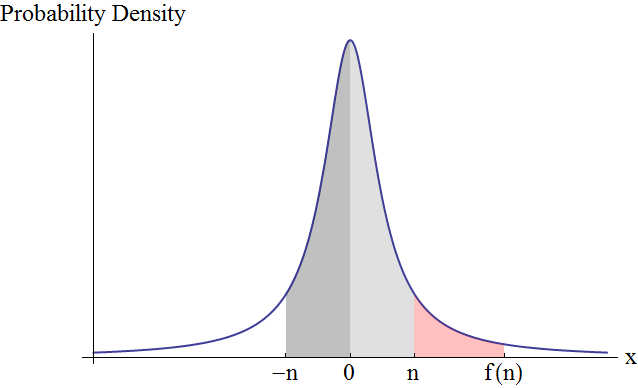 This plot of the PDF shows how $f$ is chosen to assure that the upper limit $f(n)$ extends just a little further to the right than the lower limit $-n$ extends to the left. The parts between $-n$ and $n$ balance, contributing $0$ to the expectation. The value of $f$ is chosen so that the contribution from the excess--shown in red--is always equal to $\alpha$, no matter what $n$ may be.

But a straightforward calculation gives

(Using the integration endpoints $-f(n)$ and $n$ shows that $-\alpha$ is a possible value of this limit, too.) Accordingly, since this integral can be made to equal any Real number merely by varying how the limits are taken, it cannot be considered to have a definite value.

There are some useful and well-known distributions which have undefined mean. I think one of the most used is Cauchy distribution. See Wikipedia article.

Not the answer you're looking for? Browse other questions tagged expected-value law-of-large-numbers or ask your own question.

2
Does the k-th moment exists when $E[X^k]$ is infinite in ether (one) positive or negative direction?
132
Why does the Cauchy distribution have no mean?
23
What makes the mean of some distributions undefined?
3
Can someone provide a proof for this theorem that was used in the proof of law of large number?
3
Obtaining a probability inequality from another?

0
Does the sequence satisfy WLLN?
0
Why does $\mathbb{E}(\frac{X_1+...+X_n}{n})=\mathbb{E}(X)$?
6
(Nomenclature) Are there two different Weak Laws of Large Numbers?
4
"Law of large numbers" for distribution with infinite variance?
4
Law of Large Numbers for geometrically decaying sequences