What could cause big differences in correlation coefficient between Pearson's and Spearman's correlation for a given dataset?

The Pearson's coefficient between two variables is quite high (r=.65). But when I rank the variable values and run a Spearman's correlation, the cofficient value is much lower (r=.30).

Why the big difference

Also see these previous questions on differences between Spearman and Pearson's correlation:

The following is a simple simulation of how this might occur. Note that the case below involves a single outlier, but that you could produce similar effects with multiple outliers or skewed data.

Which gives this output

The correlation analysis shows that without the outlier Spearman and Pearson are quite similar, and with the rather extreme outlier, the correlation is quite different.

The plot below shows how treating the data as ranks removes the extreme influence of the outlier, thus leading Spearman to be similar both with and without the outlier whereas Pearson is quite different when the outlier is added. This highlights why Spearman is often called robust. 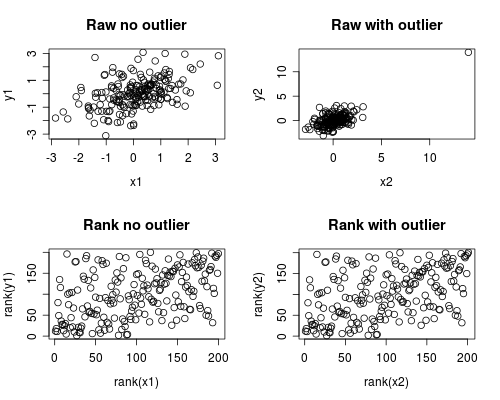