I recently purchased a data science interview resource in which one of the probability questions was as follows:

I also thought about possibly using the Normal random variables as inputs into a linear congruential generator, but I'm not sure if this would work.

Any thoughts on how I might approach this question?

In the spirit of using simple algebraic calculations which are unrelated to computation of the Normal distribution, I would lean towards the following. They are ordered as I thought of them (and therefore needed to get more and more creative), but I have saved the best--and most surprising--to last.

The ease of these constructions is evidenced by the following R code, which uses only one or two lines for most of them. Their correctness is witnessed by the resulting near-uniform histograms based on $100,000$ independent values in each case (requiring around 12 seconds for all seven simulations). For reference--in case you are worried about the amount of variation appearing in any of these plots--a histogram of uniform values simulated with R's uniform random number generator is included at the end. 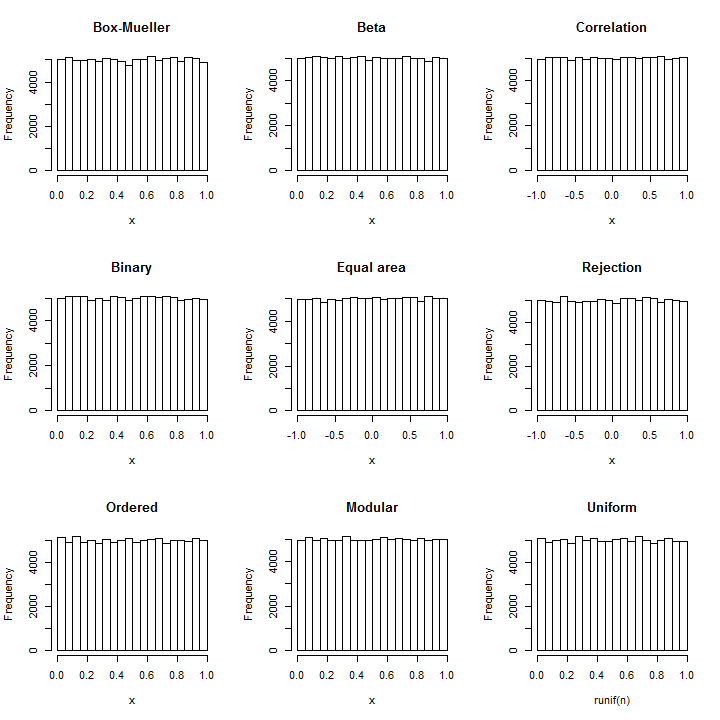 All these simulations were tested for uniformity using a $\chi^2$ test based on $1000$ bins; none could be considered significantly non-uniform (the lowest p-value was $3\%$--for the results generated by R's actual uniform number generator!).

The above probability is clearly zero for non-positive $d$ and $1$ for $d \geq 1$. This is enough to show that $\Phi_{\mu,\sigma^2}(X)$ has a uniform distribution on $(0,1)$ as we have shown that the corresponding measures are equal for a generator of the Borel $\sigma$-algebra on $\mathbb{R}$. Thus, you can just tranform the normally distributed data by the distribution function and you'll get uniformly distributed data.

The trick of transforming random variables to bits works for any independent pair of absolutely continuous random variables X and Y, even if X and Y are dependent on each other or the two variables are not identically distributed, as long as the two variables are statistically indifferent (Montes Gutiérrez 2014, De Schuymer et al. 2003); equivalently, their probabilistic index (Acion et al. 2006) is 1/2 or their net benefit is 0. This means in our case that P(X < Y) = P(X > Y). In particular, two independent normal random variables X and Y are statistically indifferent if and only if they have the same mean (they remain so even if their standard deviations differ) (Montes Gutiérrez 2014).

In this case, to generate unbiased random bits this way, sample an independent pair of statistically indifferent, absolutely continuous random variates, X and Y, and compare them. If X is less than Y, output 1; otherwise, output 0 (Morina et al. 2019). Because they are statistically indifferent, this method will output 1 or 0 with equal probability (see the appendix in my Note on Randomness Extraction).

(Note that statistical indifference also makes sense for discrete and singular random variables, but in this case an additional rejection step will be necessary if X and Y turn out to be equal [Morina et al. 2019].)

Not the answer you're looking for? Browse other questions tagged self-study normal-distribution simulation uniform-distribution or ask your own question.

81
How to generate uniformly distributed points on the surface of the 3-d unit sphere?
12
How to generate sorted uniformly distributed values in an interval efficiently?
6
What is the limiting distribution of exponential variates modulo 1?
4
How to implement a uniform random walk on a simplex?
2
Generating Beta distributions with Uniform generators
3
which is the meaning of scatterplot between a pair of 2 consecutive pseudo random numbers with respect to the independence of the sequence?
3
Convergence of sum of exponentially weighted random variables
2
Distribution of $e$ if $g=\tilde{g}+e$, $g=|f|$, $f \sim \mathcal{N}(0,1)$ and $\tilde{g}$ is the quantization of $g$
0
How to convert a Gaussian distribution random variables into a Rayleigh?
2
Which is higher? - variance of a real-valued normal random variable or variance of integer rounding of that real-valued normal random variable?
See more linked questions