I would like to specify a two-level logistic regression model with random intercept and random slope.

The goal is to identify variables in the model that explain the largest part of variation in hospitalization rate.

And furthermore if a particular effect is not random --- or the true variance is extremely small --- then the optimizer will be directed towards the boundary of the parameter space (since the variance can't be negative) - this would cause the optimizer to stop where the gradient was non-zero and the optimizer would throw a non-convergence error. 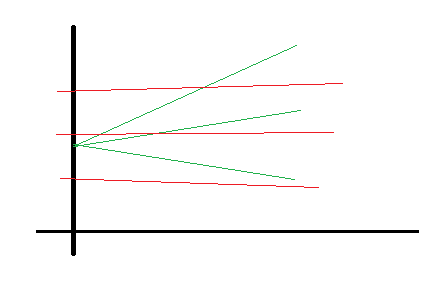 Pretend that your data look like the figure. The true model is shown by the green lines: common intercept, but different slopes. However, if you fit a model with different intercepts and 0 slope, you will get something like the red lines, as the intercept struggles to carry the full burden of the variation in the data all by itself. That's why the variance increases when the slopes are omitted.

And by the way ... welcome to the site and good luck with your analysis.

Not the answer you're looking for? Browse other questions tagged regression logistic interpretation multilevel-analysis or ask your own question.