This is my first post on StackExchange, but I have been using it as a resource for quite a while, I will do my best to use the appropriate format and make the appropriate edits. Also, this is a multi-part question. I wasn't sure if I should split the question into several different posts or just one. Since the questions are all from one section in the same text I thought it would be more relevant to post as one question.

I am researching habitat use of a large mammal species for a Master's Thesis. The goal of this project is to provide forest managers (who are most likely not statisticians) with a practical framework to assess the quality of habitat on the lands they manage in regard to this species. This animal is relatively elusive, a habitat specialist, and usually located in remote areas. Relatively few studies have been carried out regarding the distribution of the species, especially seasonally. Several animals were fitted with GPS collars for a period of one year. One hundred locations (50 summer and 50 winter) were randomly selected from each animal's GPS collar data. In addition, 50 points were randomly generated within each animal's home range to serve as "available" or "pseudo-absence" locations. The locations from the GPS collars are coded a 1 and the randomly selected available locations are coded as 0.

For each location, several habitat variables were sampled in the field (tree diameters, horizontal cover, coarse woody debris, etc) and several were sampled remotely through GIS (elevation, distance to road, ruggedness, etc). The variables are mostly continuous except for 1 categorical variable that has 7 levels.

My goal is to use regression modelling to build resource selection functions (RSF) to model the relative probability of use of resource units. I would like to build a seasonal (winter and summer) RSF for the population of animals (design type I) as well as each individual animal (design type III).

I am using R to perform the statistical analysis.

The primary text I have been using is…

The majority of the examples in Hosmer et al. use STATA, I have also been using the following 2 texts for reference with R.

I am currently following the steps in Chapter 4 of Hosmer et al. for the "Purposeful Selection of Covariates" and have a few questions about the process. I have outlined the first few steps in the text below to aid in my questions.

None of those proposed methods have been shown by simulation studies to work. Spend your efforts formulating a complete model and then fit it. Univariate screening is a terrible approach to model formulation, and the other components of stepwise variable selection you hope to use should likewise be avoided. This has been discussed at length on this site. What gave you the idea in the first place that variables should sometimes be removed from models because they are not "significant"? Don't use $P$-values or changes in $\beta$ to guide any of the model specification.

Methods specified for variable selection using statistic such as P, stepwise regression in the classic text Hosmer et al should at all cost be avoided.

Recently I stumbled upon an article that was published in the international journal of forecasting entitle "Illusions of predictability" and a commentory on this article by Keith ord. I would highly recommend both these article as they clearly show that using regression statistic is often misleading. Follwoing is a screenshot of Keith Ord's article that shows by simulation why step wise regression (uses p statistic) for variable selection is bad. 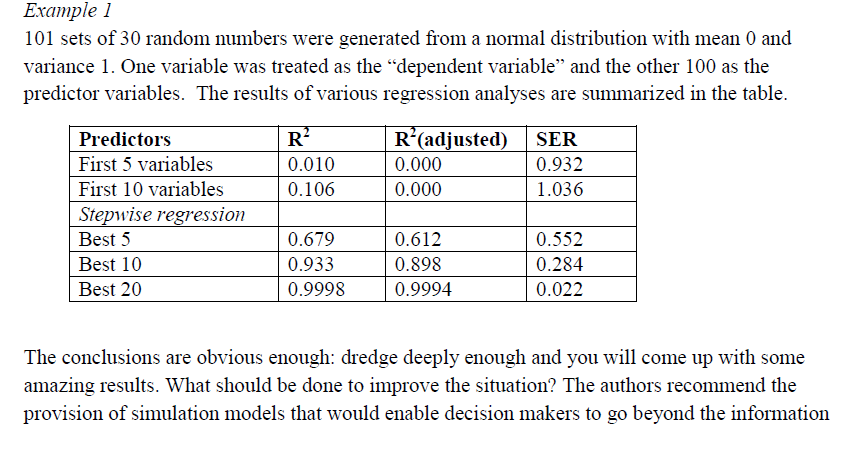 Another wonderful article by Scott Armstrong that appeared in the same issue of the journal shows why one should be very cautious on using regression analysis on non-experimental data with case studies. Ever since I read these articles I avoid using regression analysis to draw causal inferences on non-experimental data. As a practitioner, I wish I had read articles like this many years which would have saved me from making bad decisions and avoiding costly mistakes.

On your specific problem, I don't think randomized experiments are possible in your case, so I would recommend that you use cross validation to select variables. A nice worked out example is available in this free online book on how you would use predictive accuracy to select variables. It also many othervariable selction methods, but I woud restrict to cross validation.

I personally like the quote from Armstrong "Somewhere I encountered the idea that statistics was supposed to aid communication. Complex regression methods and a flock of diagnostic statistics have taken us in the other direction"

Below is my own opinion. I'm not a statistician.

I would recommend classification and regression tree (CART(r)) as an alternative over logistic regression for this type of analysis because it is assumptions free:

CART is a trademark of Salford Systems. See this video for introduction and history of CART. There are also other videos such as cart - logistic regrssion hybrids in the same website. I would check it out. an open source impentation in R is called Tree, and there are many other packages such as rattle available in R. If I find time, I will post the first example in Homser's text using CART. If you insist on using logistic regression, then I would at least use methods like CART to select variables and then apply logistic regression.

I personally prefer CART over logistic regression because of aforementioned advantages. But still, I would try both logistic regression and CART or CART-Logistc Regression Hybrid, and see which gives better predictive accuracy and also more importantly better interpretatablity and choose the one that you feel would "communicate" the data more clearly.

Also, FYI CART was rejected by major statistical journals and finally the inventors of CART came out with a monograph. CART paved way to modern and highly successful machine learning algorithms like Random Forest(r), Gradient Boosting Machines (GBM), Multivariate Adaptive Regression Splines all were born. Randomforest and GBM are more accurate than CART but less interprettable (black box like) than CART.

Hopefully this is helpful. Let me know if you find this post useful ?

I think you're trying to predict the presence of the species with a presence/background approach, which is well documented in journals such as Methods in Ecology and Evolution, Ecography, etc. Maybe the R package dismo is useful for your problem. It includes a nice vignette. Using the dismo or other similar package implies to change your approach to the problem, but I believe it's worth to have a look at.

4
How come variables with low information values may be statistically significant in a logistic regression?
4
Correlated error term residual in logit regression: what are my options?
2
How does Support Vector Machine compare to Logistic Regression?