I have two groups of time series and I am testing the hypothesis that the groups can be distinguished in some way. Each time series is measurements of an individual’s pupil size as they listen to an emotive story. At the end they answer one question concerning the story which they can get right or wrong. So I just want to see if there is something about changes in pupil size over time which distinguishes those who answer correctly ($n=75$) from those who don’t ($n=27$).

So I have the very strange result that individuals in the correct answering group are more similar to the other group that they are similar to themselves. At first I thought this impossible and I checked my scripts very carefully. But I now believe this really is the result I got. I think I also have a way to interpret it: What specifically distinguishes the correct group is that their time series change more often and more unpredictably than the incorrect group. My questions are:

EDIT. In response to the very useful answer and comment, I add a little more information. The stories are recorded and the data is collected with a 60Hz eye-tracker so there are no problems there. The data looks like this (a little challenging to explore visually because there is a lot): 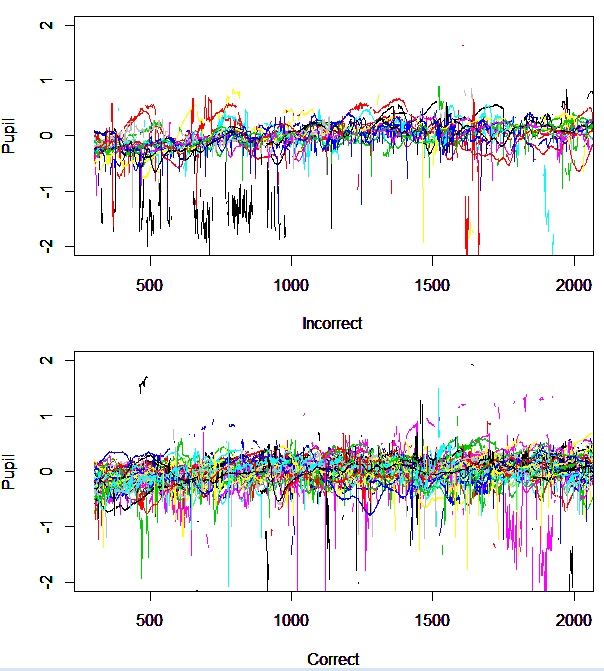 I plan to use methods like the suggested surrogate time series, and further summary statistics, to better understand the nature of the difference in my data. However I would appreciate comment on one further issue. I understand that the difference between Correct and Incorrect that I think I have demonstrated may not be meaningful from the perspective of certain hypotheses. I wonder however if you would agree with the following statement? The significantly p-value from the test I performed indicates at least that we should reject the null-hypothesis that the two sets of time-series come from exactly the same population (i.e. some aspect of the pupil-data is related to the subsequent answer).

It can very well be that other features of your time series (than you want to measure) lead to higher cross-correlations. To give an illustrative example (that does not exactly apply to your situation), the absolute values of the cross-correlation between time series with the same frequency content will on average be higher. In your exapmle, it can very well be that your cross-correlation is mainly determined by the strong outliers and thus a few outliers decide about the value and you thus overestimate the significance of your result.

A good way to find out (and eventually correct this) is using surrogate time series, i.e., artefical control time series, which keep some features of the original data but destroy others. For example, if you generate IAAFT surrogates of your individual time series, you would keep their amplitude distribution as well as their autocorrelation function (and thus their frequency content). In particular you would keep the strong fluctuations for your “correct group”.

On the other hand, you would destroy any information tied to absolute time, in particular your story. Relatedly, you also destroy any actual temporal correlations to other time series. Therfore any cross-correlation you measure between those surrogate time series only has to come from the individual features of those time series (amplitude and frequency content) but not from an actual correlated temporal evolution (because you destroyed that information in the surrogates).

So, if you observe comparable results when analysing surrogate time series instead of your actual time series, your observations are due to a methodological artifact.

The cross-correlation effectively measures whether two time series change synchronously. Using it thus relies on the assumption that they were taken under synchronous conditions with respect to your sampling frequency and the variability of your time series. For example, if the lowest relevant frequency content in your time series corresponds to a period of 10 s, you cannot allow for a comparable inaccuracy of the delay between the beginning of the recording and your story.

Moreover, this assumes, that everybody reacts to the story in a very similar way. For example, you would assume that the pupils of all subjects (or at least all subject in one group) dilate during a specific part of the story. I do not think that humans behave that predictably. From another point of view: You probably know a lot of things unrelated to your experiment that affect the pupil size on the relevant time scales. All these effects are already meaking univariate time-series analysis very difficult. Bivariate measures (such as the cross-correlation) may be rendered fully meaningless. In general, I would be very careful with applying bivariate measures to time series that were not recorded simultaneously.

Looking at your time series confirms this: The time series are highly individual, in particular the outliers and jumps. The result of the cross-correlation is therefore very likely to be meaningless.

Instead I recommend take a look at simple univariate time-series measures, such as the mean, the standard deviation, the frequency content, etc. and statistically compare them (be aware of multiple testing and cherry-picking though). This could in particular capture the observation you already made that “time series change more often and more unpredictably” in one group.

Not the answer you're looking for? Browse other questions tagged time-series group-differences cross-correlation or ask your own question.

33
Line graph has too many lines, is there a better solution?