Why does ridge estimate become better than OLS by adding a constant to the diagonal?

However, I don't fully understand the significance of the fact that $\beta_\text{ridge}$ differs from $\beta_\text{OLS}$ by only adding a small constant to the diagonal of $X'X$. Indeed,

In an unpenalized regression, you can often get a ridge* in parameter space, where many different values along the ridge all do as well or nearly as well on the least squares criterion.

* (at least, it's a ridge in the likelihood function -- they're actually valleys$ in the RSS criterion, but I'll continue to call it a ridge, as this seems to be conventional -- or even, as Alexis points out in comments, I could call that a thalweg, being the valley's counterpart of a ridge)

In the presence of a ridge in the least squares criterion in parameter space, the penalty you get with ridge regression gets rid of those ridges by pushing the criterion up as the parameters head away from the origin: 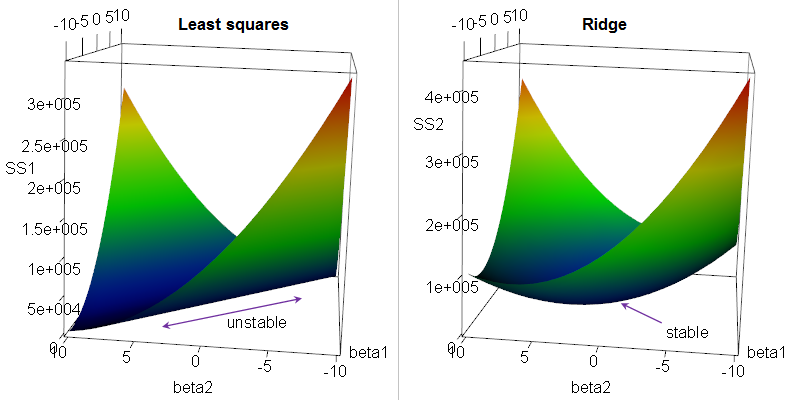 In the first plot, a large change in parameter values (along the ridge) produces a miniscule change in the RSS criterion. This can cause numerical instability; it's very sensitive to small changes (e.g. a tiny change in a data value, even truncation or rounding error). The parameter estimates are almost perfectly correlated. You may get parameter estimates that are very large in magnitude.

By contrast, by lifting up the thing that ridge regression minimizes (by adding the $L_2$ penalty) when the parameters are far from 0, small changes in conditions (such as a little rounding or truncation error) can't produce gigantic changes in the resulting estimates. The penalty term results in shrinkage toward 0 (resulting in some bias). A small amount of bias can buy a substantial improvement in the variance (by eliminating that ridge).

The uncertainty of the estimates are reduced (the standard errors are inversely related to the second derivative, which is made larger by the penalty).

+1 on Glen_b's illustration and the stats comments on the Ridge estimator. I would just like to add a purely mathematical (linear algebra) pov on Ridge regression which answers OPs questions 1) and 2).

Now since matrix inversion corresponds to inversion of the eigenvalues, the OLS estimator requires $(X'X)^{-1} = V D^{-1} V'$ (note that $V ' = V^{-1}$). Obviously this only works if all eigenvalues are strictly greater than zero, $d_i > 0$. For $p \gg n$ this is impossible; for $n \gg p$ it is in general true - this is were we are usually concerned with multicollinearity.

As statisticians we also want to know how small perturbations in the data $X$ change the estimates. It is clear that a small change in any $d_i$ leads to huge variation in $1 / d_i$ if $d_i$ is very small.

The numerical stability is related to shrinkage to zero as they both are a consequence of adding a positive constant to the eigenvalues: it makes it more stable because a small perturbation in $X$ does not change the inverse too much; it shrinks it close to $0$ since now the $V^{-1} X'y$ term is multiplied by $1 / (d_i + \lambda)$ which is closer to zero than the OLS solution with inverse eigenvalues $1 / d$.

@Glen_b's demonstration is wonderful. I would just add that aside from the exact cause of the problem and description about how quadratic penalized regression works, there is the bottom line that penalization has the net effect of shrinking the coefficients other than the intercept towards zero. This provides a direct solution to the problem of overfitting that is inherent in most regression analyses when the sample size is not enormous in relation to the number of parameters to be estimated. Almost any penalization towards zero for non-intercepts is going to improve predictive accuracy over an un-penalized model.