Some of you might have read this nice paper:

Currently I am comparing negative binomial models with gaussian models on transformed data. Unlike O’Hara RB, Kotze DJ (2010) I'm looking at the special case of low sample sizes and in a hypothesis testing context.

A used simulations to investigate the differences between both.

All compuations have been done in R.

I simulated data from a factorial design with one control group ($μ_c$) and 5 treatment groups ($μ_{1−5}$). Abundances were drawn from a negative binomial distributions with fixed dispersion parameter (θ=3.91). Abundances were equal in all treatments.

If needed I can provide the R code, but see also here for a related question of mine.

LR tests give similar (increased) Type I errors for both LM and GLM.

Interestingly the quasi-poisson works pretty well (but also with an F-Test).

For the small sample size there have been some convergence problems (not show) for the GLM, however only at low abundances, so source of error can be neglected.

Interestingly, the LR-Test for a binomial GLM does work pretty well: 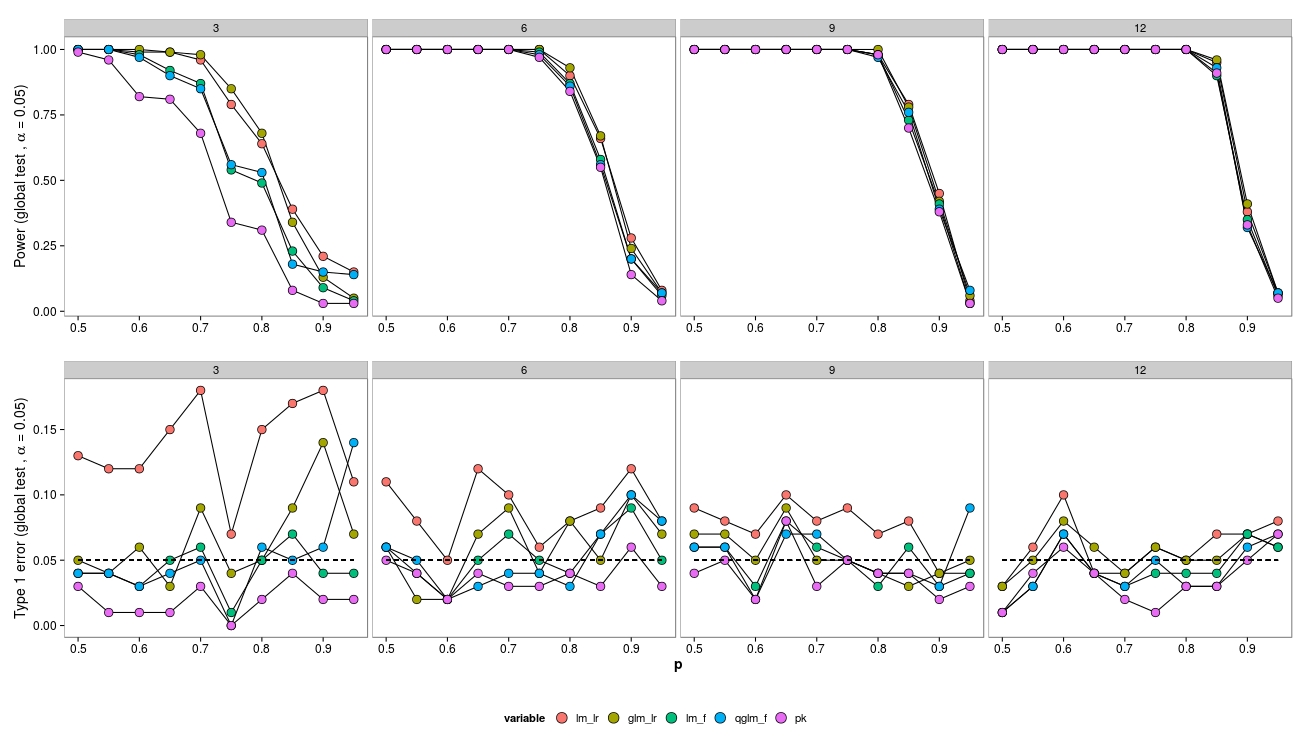 Here i draw data from a binomial distribution, setup similar as above.

Here only the gaussian model (LR-Test + arcsin transformation) shows an increase Type I error, whereas the GLM (LR-Test) does pretty well in terms of Type I error. So there seems to be also a difference between distributions (or maybe glm vs. glm.nb?).

The Likelihood ratio test you're using uses a chi-square distribution to approximate the null distribution of likelihoods. This approximation works best with large sample sizes, so its inaccuracy with a small sample size makes some sense.

I see a few options for getting better Type-I error in your situation:

Finally, the Poisson distribution has one fewer free parameter than the negative binomial, and might be worth trying when the sample size is very small.

Not the answer you're looking for? Browse other questions tagged hypothesis-testing generalized-linear-model simulation negative-binomial type-i-and-ii-errors or ask your own question.

96
Diagnostic plots for count regression
18
Negative-binomial GLM vs. log-transforming for count data: increased Type I error rate
2
Can someone look at my method for fitting a GEE to my data?
4
What is the empirical size of a test?
12
Using lm for 2-sample proportion test
1
Fitting negative binomial
4
Overdispersion in Count Data (Poisson model)
1
Required sample size to reach adequate power of a test
1
Using the $Z$-test instead of the binomial test for small $n$ - effect on power and Type I error