What are the right values for the prior mean and prior variance matrix in choice design?

I am doing my first choice experiment with JMP & the tutorial I found at http://blogs.sas.com/content/jmp/2009/01/15/optimal-design-of-the-choice-experiment/

Right now I am not sure if I understood everything correct. The author describes how to do the parameterization for an attribute with 3 levels:

"When there are three levels in increasing utility order, enter negative, then 0." 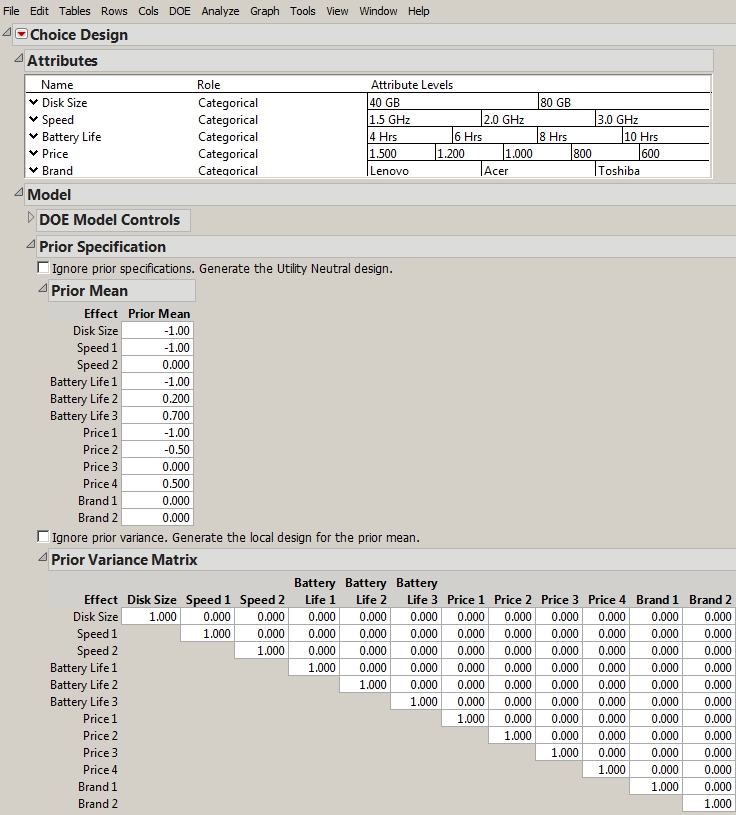 Prior Means, in terms of JMP, are actually utilities. I don't know at all why they call it "Means". Most likely it's because utilities (path-worth) are "means" of something, that sophisticated (hopefully) JMP algorithm uses to calculate utilities.

The same apply to "Variance". It looks like variance and the default "1" is most likely because 1 is variance of standard normal distribution. it's unclear the variance of what. On other hand, the matrix looks pretty much the same as correlation matrix and 1 in this context has obvious meaning. No any manuals say what would be the values other than to themselves (default zeros).

The way how JMP supposes to use Prior Mean and Prior Variance is simple: just run pilot survey and put the data from the analyzed results. I'm not sure if it would be reasonable to guess these values except you have great experience and know what to expect from these kind of "proprietary" numbers.

I saw your posts on JMP blog. The guy with nick LTW suggested that "Means" should sum up to zero. It's true for Sawtooth utilities but not true for JMP results that gives nearly but not exactly 0. It's also totally unclear why amount of these prior utilities aka "Means" equals to (levels -1). That is, if attribute has 5 levels, you should indicate only 4. Nevertheless, nor 5 or 4 levels will come up to zero.

Not the answer you're looking for? Browse other questions tagged probability sas jmp conjoint-analysis choice or ask your own question.

1
CBC analysis using choicemodelr - interpretation of the output attribute values
1
Choice Conjoint-Analysis design for 2-way interactions
1
From Discrete choice to Conjoint utilities
0
Conjoint analysis on split-sample?
0
How can I estimate the power of a MaxDiff experiment with covariates?