Not sure about the interpretation of this residual plot

I'm analyzing a residual plot of the residuals vs the fitted values.

I'm not quite sure how to interpret this plot since there looks like there is a pattern and the average is not actually zero. There are diagonal straight parallel lines. 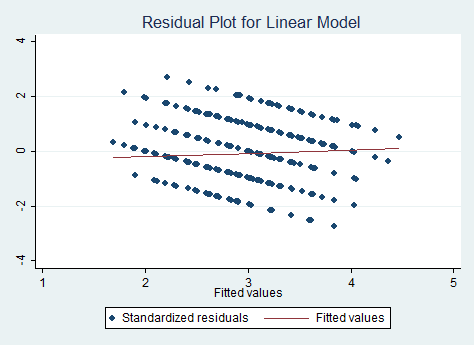 In practice, I tend to not have a problem with treating ordinal independent variables as numeric variables if there are at least five values and you are somewhat confident they are equally spaced on the spectrum of possible values -- that is, a difference between any two consecutive is approximately of equal magnitude. This practice is not grounded in theory, but experience has shown me that results tend to not be badly biased.

If this work is intended to be published, I suggest you either carefully justify your decision to use this method or look into alternative methods. EDIT: As suggested by @NickCox in the comments, ordered logit (or probit) regression would be a suitable alternative to deal with the ordinal response variable.

One consequence of treating the variables as continuous is that the residual plot can appear as a series of parallel lines, as your plot shows. This makes the typical pattern detection of the residual plot more difficult since the points clearly will not be randomly scattered.

As far as your plot is concerned, I believe it is acceptable. There is no clear curvature of the plot, and no fanning (i.e. no heteroscedasticity). They appear (to me) to form a roughly horizontal band if you take the density of points into account when forming the band. I would suggest plotting the absolute value of the residuals to help assess heteroscedasticity further.

Not the answer you're looking for? Browse other questions tagged regression residuals or ask your own question.